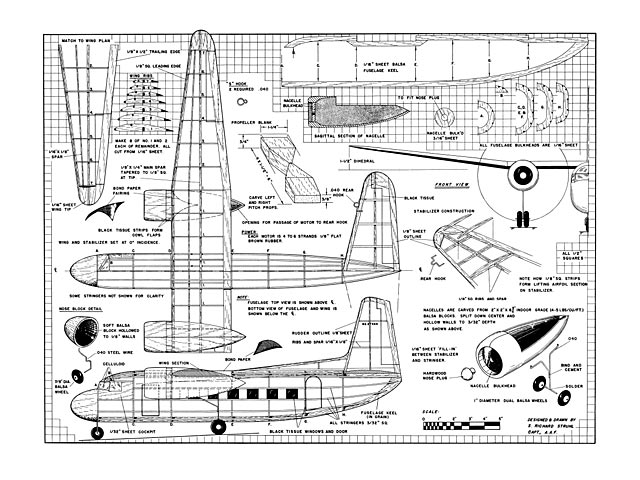 Quote: "We present this month a most unusual rubber powered flying scale model - the Lockheed Saturn, which lends itself admirably for this type of model. The force arrangements and setup are almost perfect for stable flight, and the engine nacelle and stabilizer location provide just the proper amount of down thrust.

But a word about the 'big job' before we get into the model; the Saturn was designed as either a short haul or feeder line passenger-cargo transport. It also lends itself nicely as a corporation personnel traasport. The ship is powered by two 525 hp engines and has a top speed of over 240 mph carrying 24 passengers and baggage. The extreme simplicity of operation has kept the operating cost per mile very low. Crew consists of two men.

The model is a very pleasing performer. Takeoffs and landings are particularly nice with the tricycle landing gear, Obviously propeller torque, one of model aircraft's biggest bugaboos, is eliminated with the counter-rotating props. Although extra work is involved in winding up the motors, the flying results are more than worth the effort.

The preliminary flights were held indoors where we found that 4 strands of 1/8 flat brown rubber in each motor was powerful enough to have model 'dead stick' at about 30 feet. We attribute this feat to the careful selection of material we put into the model. For example, all structures that had no stress on them (nose block, nacelles, wingtips, etc) were cut from the lightest indoor grade balsa obtainable. Colored dope was shied away from except on props and wheels. In other words a definite effort was made to keep the weight of the model to a minimum.

Although the model is a twin-engined flying scale, don't let this fact frighten you. A short study of the plans will convince you that the construction is as simple as can be and even beginners should have no difficulty. The only catch for the 'lazy hounds' is the fact that you can't purchase the propellers. They must be carved as shown because no model manufacturerers produce a left handed prop. But both props shouldn't take over an hour's work, so buckle down, sharpen your knives and dig in.

The plans are drawn to a convenient scale and may be enlarged by employing a set of dividers or the 1/2 in graphs. 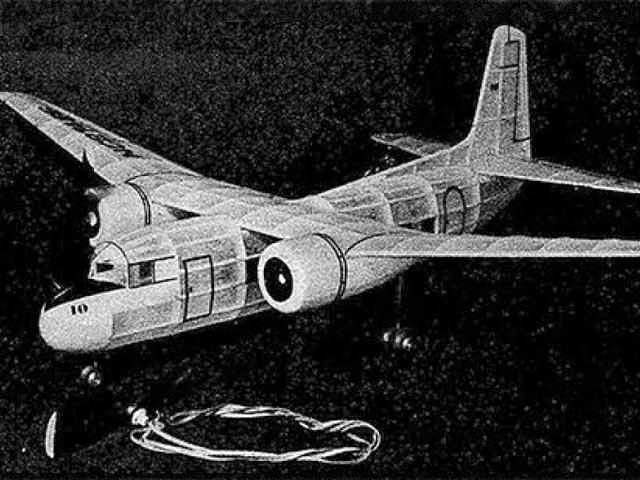