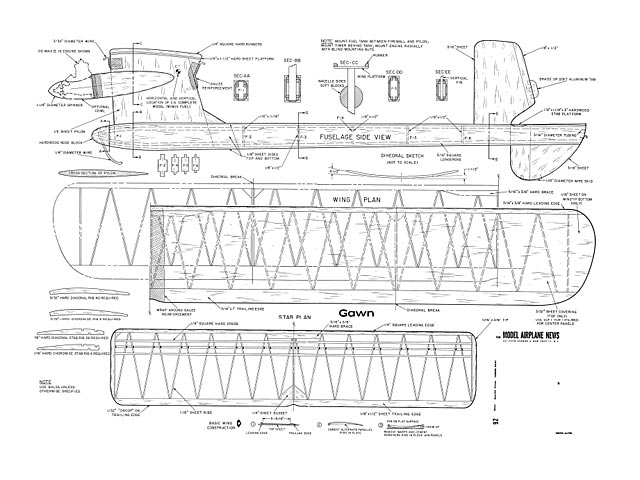 In the middle of June, 1959, the author lost his one FAI gas ship during the Frederick, Maryland eliminations meet. Having qualifed for the semi-finals, a problem arose; the semi-finals were two weeks away, and no airplane! These were the conditions that brought about the decision to build Gawn.

Two ships would be built; the wings would be identical, as would the horizontal tails. In Order to cut building time to the minimum, neither wings nor tails would be tapered. Since a thin (less than seven percent) section and a relatively high aspect-ratio wing were desired, the sheet-top wing structure was a must. Finally, to further expedite construction, a pylon-nacelle assembly, salvaged from a 1954 semi-high-thrust-line FAI power ship, would be utilized on one fuse-lege; the other fuselage would be built from scratch, and would be of the 'conventional' (Americano) type. One week later, after much midnite oil-burning and much moral support from the MOW (mean old wife, who would like to go to Europe), two ships were ready for test flying.

Two evenings of test flying, and a few modifications (significantly, a large increase in vertical fin area) showed that the semi-high-thrust-line ship was the better all-weather airplane, and was equal to the conventional ship in dead air, therefore the decision was made to use Gawn as the number one ship, the conventional ship for back-up duty.

At the East Coast semi-finals held June 27 and 28, 1959, at Frederick, Maryland, Gawn put in ten consecutive maximum flights, plus an eleventh record-attempt flight of four minutes and eight seconds. The first nine of these flights were sufficient to win a place on the US FAI free-flight power team (since the World Championship free-fllight power event was not held in 1959, it is at present not known whether those who won a place on the US team in 1959 will be allowed to compete in the World Championships in 1960, or whether the team will be re-selected).

Inasmuch as the drawings are pretty well self-explanatory no general building instructions will be given here. A few points, however, need further clarification, and several other points justify emphasis. These points follow.

For all critical joints (such as firewall, wing and tail platforms, and the three dihedral joints), several rubbed-in coats of regular (slow-drying) Ambroid, followed by gauze or other strong fabric..." 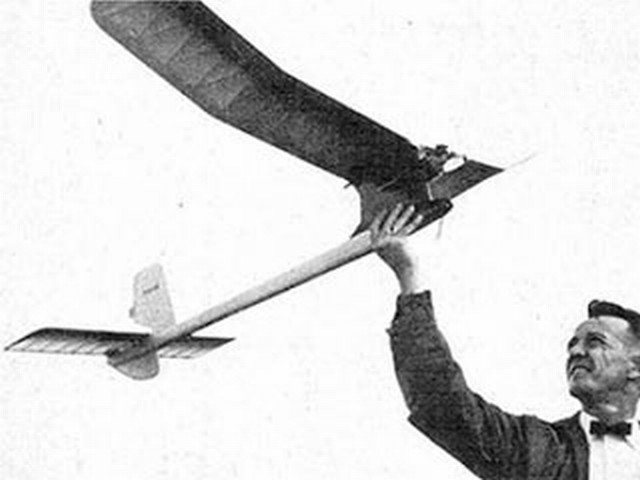