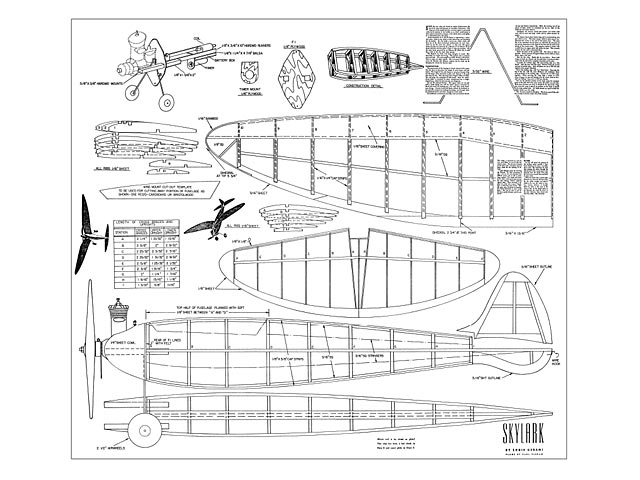 Quote: "Which will it be, climb or glide? This ship has both, a hot climb in Class B and super glide in Class A. Skylark, by Lou Garami.

SINCE the new rules are based on engine displacement the size of the ship itself becomes of secondary importance. The wing area of the model built for a certain engine is governed solely by the opinion of the builder as to which combination is more apt to succeed in a contest, a fair climb and a swell glide, or a swell climb and a fair glide.

As the borderline of A and B Classes is approached, a situation arises which to my mind is both interesting and beneficial for the builder. He can build a two-in-one model which will have one of the above-mentioned combinations for each class. And it is not the same one, either! A ship with 320 square inches of wing area powered by a Bantam or an Ohlsson 19 no doubt will have the best glide a Class A ship can produce. On the other hand, powered by an Ohlsson 23 (Class B), it will bore a hole in the sky when fully opened.

The Skylark was built with these thoughts in mind. Mechanically it is simple and strong. The ignition unit is compact and removable. The total weight as a Class B ship is 18 ounces. That is using very light wheels. The two ounce difference between the Bantam and Ohlsson engines can be made up by changing the wheels for heavier ones.

Construction: The construction of the fuselage is clearly shown in five steps. Use the chart to determine the length of cross braces and up-rights. The length of the side braces is not given because they are left longer when cemented in place and trimmed at the peak after they are dry. The cap strips and stringers follow in order. The tap strips are sandpapered half-round. Next the under-slung rudder is cemented in place, strengthened by a wedge-shaped brace which fits between the two longerons.

Cut out F1 plywood former. The square holes are cut out with a small coping saw and the motor bearers cemented in. Bend and attach the landing-gear wire with three small aluminum fittings. Cement hardwood blocks behind the bulkhead at the point the woodscrews holding the fittings run through, since the bulkhead itself is not thick enough for a firm hold.

The bulkhead is centered to the body with two locating dowels on top and bottom respectively. Make the the cowling out of ten pieces of balsa which are cemented one by one right on the bulkhead and motor bearers.

Sandpaper the corners round and cement wire hooks onto each side of cowl and body which rubber-banded together.

The battery box is four inches long and it accommodates two pen cells in series. The timer mount which is made out of 1/16 plywood also serves as the end of the battery box. This part has to be cemented several times to withstand the pressure of the spring connection in the front of the box and the pull of the string on the Austin timer. The negative contact is made with a small brass or copper plate laid inside the box. This extends outside the box and is cemented there. Solder all joints of the ignition unit. Use wires as short as possible. Ninety percent of engine failures on the field are loose joints, shorts and such.

Now for the wing. Build this in two halves. These half wings are built on a board and the gull effect is produced afterward with the aid of the templates provided on the plan.

Assemble the trailing edge, ribs and leading edge on a flat board. Add top spar and tips next. Remove from the board and put in bottom spar. Now all joints are cut at W4 rib and reglued at the proper dihedral..."

Article, includes the printed drawings.
Alternate article, thanks to RFJ, has clearer pics. 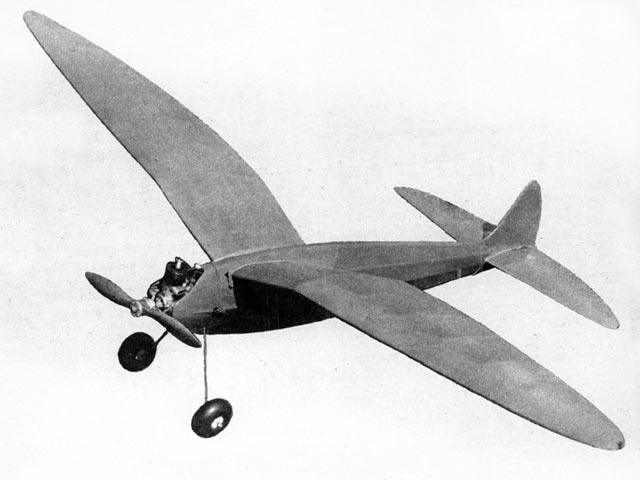