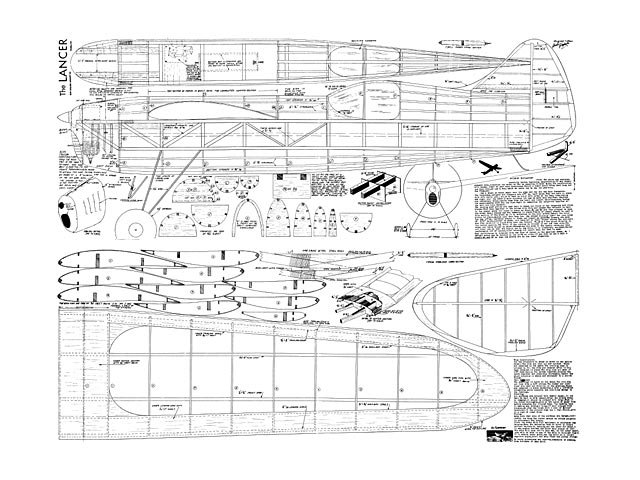 Quote: "Lancer. A 72 inch labor of love. By Lloyd Peterson.

As the years go by, I find I'm more impressed with the old time free-flight models than ever before. I like the way they look and love to watch their stately flight. And when equipped with R/C, I no longer have to chase them? I never liked that part of free-flight flying. Several years ago, I built and flew a scaled-down Lancer. I flew it in 1/2A Texaco. It was an enjoyable airplane to fly, so I wanted to build an original sized 72-inch Lancer for electric power.

A man named Chaplaskie designed the original Lancer in 1938. I realized I would have to make changes to it for e-power and radio control, so I reasoned, why not modernize it a bit at the same time. Consequently, it got a new airfoil, the Selig 7032. The wing spars are now carbon fiber reinforced, they bolt on, are equipped with spoilerons, and the ailerons are mixed with the rudder. The prop is now an 11-1/2 x 7 folding Freudenthaler, purchased from Hobby Lobby.

Maybe the Lancer's most unique feature is its stabilizer. It uses an inverted airfoil to push the tail down during higher flying speeds, like with the power on. This down-forced tail is supposed to make the aircraft climb when the flying speed is increased. However, when its climb rate gets too steep, the aircraft is designed to slow down and the tail rises, slowing the climb rate and increasing the speed. If this design feature works right, the Lancer is supposed to climb at its best rate without input from the pilot - read that as without the unnecessary stalling that typically happens when the pilot tries to climb the model too fast. I'm not an engineer, but I am an old-timer like my airplane and I have tried a lot of different design approaches. My engineering usually consists of cuts and tries until it works, or the experiment is destroyed. This time I think I may have carved something out that actually works the way I wanted it to.

The Lancer is not a high-dollar project. It's a typical scratch builder model - use what you got and borrow the rest. I used John Pond plans, but I wanted a running start on building this model. So, I asked Dr M Selig to plot what he felt was the best airfoil for my airplane. He did, because I'm his stepfather and sometimes I fix his car.

I sent the plans and airfoil outlines to Klarich Kits and they cut me a semi kit. It contained wing ribs, fuselage formers, firewall, wings and tail section tips, and formed landing gear. I had an Astro 05 geared 7-turn motor. It is an old one, used but not abused. I also had an Airtronics Module Series radio. It is not a computer radio, but it has the switches necessary to select the many mixes and configurations I wanted for this particular airplane, so I used it.

I have a good selection of balsa and spruce, so the only things I had to buy were wing servos, carbon fiber for the wing spars, and a speed control. I covered the model with a silk-like material and doped it, just like my old-timer friends told me to do. I'm quite pleased with the overall effect and it has the old time look.

The test flights of the Lancer have been done on very still mornings in November. I'm pleased with its flight characteristics but I haven't had the opportunity to directly compare this model with another. The Lancer flies steady and true, climbout is more than adequate from a hand launch, and flight duration is 10-14 minutes with 4 minutes or so of intermittent motor run. Turns are smooth and predictable and landings are soft and slow.

I changed the stabilizer angle of incidence twice before I was happy with the results. The plans sketchy at best, so I started at 3° incidence between the wing and stab. It is now set to 0° incidence with a small amount of down thrust on the motor.

The design of the stab makes dive testing to establish the correct center of gravity useless, so it is a bit nose-heavy right now. I plan to keep removing weight from the nose until it gets a little squirrely, then I'll put some back.

Also, the spoilers only rise about 30 degrees and they are only 13 inches long, so they don't seem efficient enough for something like spot landings. But they kill enough lift to bring the model down from an elevator thermal. They provide another advantage too. When they are raised a bit they add very effective washout and stabilize the model on landing approach.

The following addresses may help if you want to build an 'Old Timer.' Go to it, it was fun for me, and I'm sure you'll like the way they look and fly. The design changes I made may not be contest legal but I'm certainly enjoying my custom Lancer!" 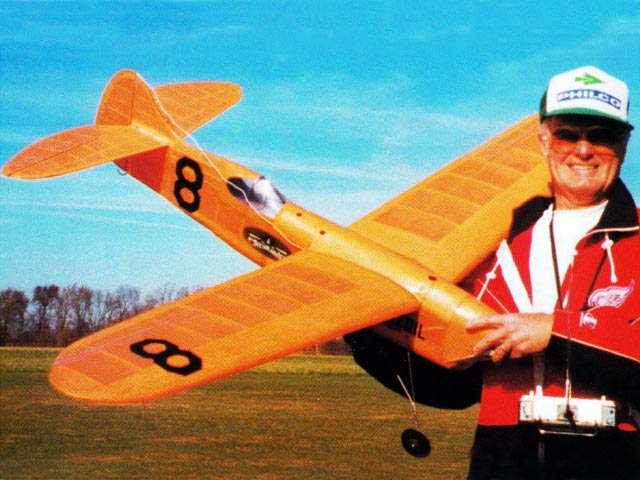 Old Timer flying from Greece. I am sending a photo [pic 005] of my Lancer 72 (Outerzone plan) with home made reed transmitter. Regards from Athens, Greece,
Panagiotis Siatounis - 06/09/2021
Add a comment