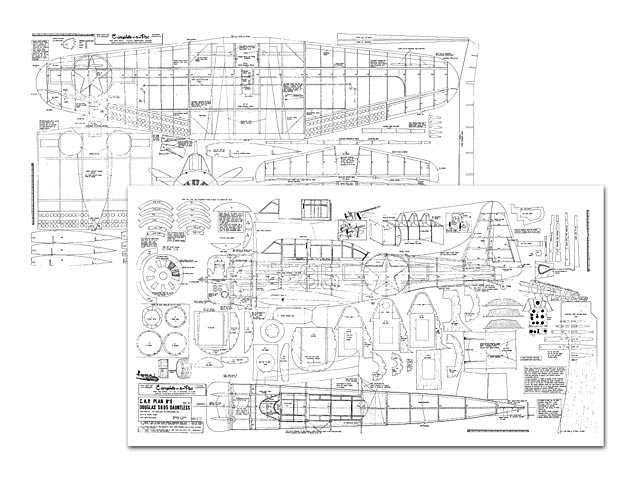 The Dauntless was chosen because I wanted something which would stand out at the flying field amongst the Spitfires and FW109's usually seen at the South Derry MFC here in Northern Ireland. The box art on the Airfix kit of the plane in a dive whilst fending off two Zeros had stuck in my memory since childhood and when I found the design in the Plans and Construction Guide I knew at once that this was going to be my next project. The fibre glass cowl, moulded canopies and huge plans duly arrived and I got to work.

Wings: These were built exactly as per the plan with no modifications being necessary. A point to note is that the retracts have to be mounted at 80 degrees to the wing but this is no problem to use 90 degree units as the wing centre section is so deep that it easily accommodates the extra movement. The flaps present no problem and just have to be built into the model as they are such a classic feature of the design. One standard servo operates the two outer flaps via a snake and bellcranks. A further micro servo actuates the centre flap via a Y-lead to the other flap servo. The air reservoir, valve and micro servo to operate the valve are all installed in the centre section and all linkages were fitted and checked for operation before the top 1/16 sheeting was added.

Fuselage: The first thing I noticed were the number of ply formers in the fuselage construction. All ply parts behind the c of g were immediately lightened considerably! Otherwise, the construction is very straightforward and starts with a rectangular box, followed by the main longerons and half formers. Both the rudder and elevator linkages were hidden to keep the scale fidelity which is not difficult but requires the servos and pushrods to be installed at a very early stage. I sheeted the fuselage in 1/16 instead of 3/32 as per the plan to save weight.

The only other alterations to the fuselage were purely for ease of maintenance. The balsa block in front of the cockpit was cut vertically between Fl and F3 with the edges being lined with 1/32 ply to stop 'chipping'. This hatch is held in place with two large screws which are accessible through the front of the cowl. See diagram. A 20 oz Dubro tank was easily fitted through the opening along with a mini servo for the throttle which fits on a ply mount in front of F4.

As there's not much room inside the cowl I used a soft mount to get the engine as close to the firewall as possible. A four stroke would have had to stick through the side of the cowl so I chose a two stroke in the form of an S.C. 90 so it wouldn't detract from the scale effect.

I decided to take a pair of scissors to the first class canopy I had purchased with the plans as I wanted to have a sliding canopy. However, I decided to glue the rear canopy in the open position and just have the front one sliding. This was done by using a car windscreen wiper with the arm glued to the formers and then sheeting added to be flush with the outside edge of the arm. The wiper blade itself is glued to the canopy and works a treat!

All those bits and pieces: Two pilots were bought from Pete Richardson at 'Pete's Pilots' and painted with acrylic paints. The spinner was bought from Brian Taylor and is the one he supplies for his Corsair plan. This had to be modified slightly on a lathe but at least I had something to work on to begin with. The exhaust stubs and dummy radial engine were purchased from Vortex Plastics, and the oleo legs were the ones supplied by J. Perkins. The pair of Browning machine guns which feature strongly in the rear cockpit were scratch built from brass tube and balsa. The latter was lined with cereal packet card and painted with black enamel followed by dry brushing with silver to give a 'used' effect. Williams Bros ammunition belts completed the detail.

Paint and detail: I finished the model using tissue and dope with rivets added from PVA glue applied with the largest tooth from a comb. I noticed that the PVA had a tendency to 'flatten out' so I changed to R/C Modeller's Glue which gave a nicer 'dome' effect. One other important scale feature of the Dauntless is the bomb 'crutch' which I fabricated from aluminium tube. As it's right below the CG it didn't affect the flying characteristics at all.

Flair Spectrum paint was mixed to as close a match as I could get and then sprayed on. All markings were painted with enamel by hand. These are based on an aircraft which flew from the carrier Yorktown in Bomb Group 5 during the battle near Wake Island in 1943. The Dauntless is very heavily weathered as they were subjected to a hard life on board ship, all the photos I studied showed quite noticeable wear all over the aircraft. Once again, I used the dry brushing technique with silver paint which picks up edges and high spots to give a good effect.

Flying: After taking nearly a year to construct I was a little apprehensive at the thought of the first flight so I got my good friend Robert Grahme to do the honours. The model tracked straight down the runway and lifted off after about forty yards and the choice of the SC 90 swinging an APC 13 x 8 prop proved to be good with plenty of power to spare and a throttle setting of about 1/3rd for cruising. Large, scale like rolls are possible with quite a good barrelling effect. At the time of writing I haven't tried out the flaps as I'd prefer to do things one step at a time!

Landing is very straightforward with a little bit of power being kept in reserve until it's over the threshold. 40 grms of lead was required to get the CG forward to the correct place as shown on the plan and I recommend that anyone who builds this model adheres to it! On the first flight I had too much aileron movement and this could have caused a tip stall at lower speeds if full aileron had been applied. The ailerons are quite effective and don't need much throw.

I also cut off the cooling gills and refitted them in the open position to allow adequate air to exit from the cowl. Once the nerves had subsided I found the Dauntless to be a pleasant and exciting model to fly which fulfils all the criteria for a scale R/C model. And it isn't a Spitfire!" 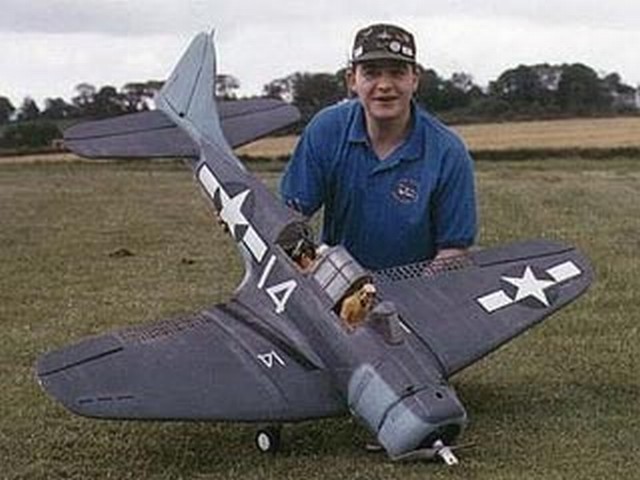