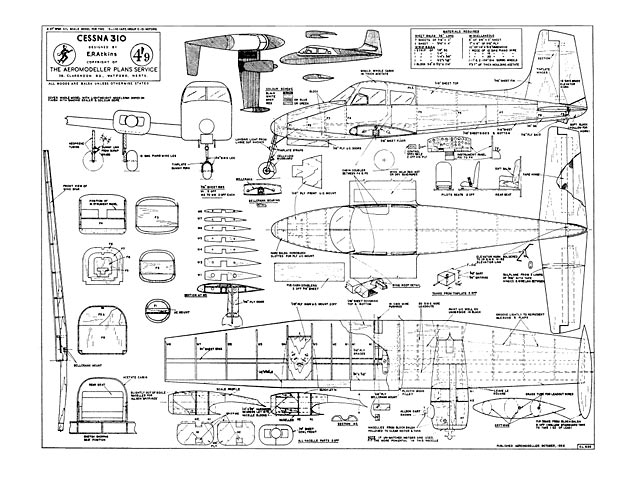 THE CESSNA 310 is one of several twin-engined Business-man's aircraft which have been introduced to the American public in the last three years. It is of all-metal construction and seats five people including the pilot. It is powered by a pair of Continental O-470-B, 6-cylinder, horizontal opposed engines rated at 240 hp each. They drive this little plane at a top speed of over 220 mph. With five people, a full fuel load, and 225 lb of baggage, it has a range of 1,000 miles cruising on 50 percent power at 175 mph. The 310's sleek lines and beautiful paint job make it one of the most attractive aircraft in the air today.

This American model will provide many hours of flying enjoyment and keeping the weight down to choosing good, low density balsa is a key factor in its performance. The choice of two good, depend-able engines is also important. If the proper engines are used it will perform equally well on either engine. The original was powered by .8 cc Glow Plug engines and later with 1 cc for better performance.

Construction is started by cutting the main spar and plywood joiners to shape. Attach the centre section spar to the outer panel spars with the joiners. Then add ribs in proper position. Next cut the leading edge to shape and glue in position. Add the plywood bellcrank mount and bellcrank in position between the 1st and 2nd Rib. Form the main gear from 16 g piano wire and bind to the plywood gear mount with thread, then cement thoroughly and place on wing. Next cover the bottom of the wing with 1/16 sheet balsa. Next step is to put in the lead outs and solder. Cut holes in each rib to clear the leadouts then you may cover the top of the wing. Cut an access hole near the bellcrank in the top of the wing to allow the push rod to be inserted.

Fuselage sides are cut to shape and joined with former F5 and then Fl. Add the balance of the formers then the floor if cockpit details are desired. If no cockpit details are to be added, then eliminate the floor, make F4 as one piece. With cockpit details, 1/16 doublers should be added between F4 and F5 for stiffness. Place1/4 square strips in lower aft position and 1/8 square upper aft. Cover with 1/16 sheet top and bottom. Next, tack wing in place and locate push rod. When you have ascertained its position, glue the wing in place. Leave the push rod long to adjust elevator travel. Tack the upper and lower nose blocks in place and contour them hollow to approx 5/32 in wall thickness. Form the nose gear and mount to the plywood sheet and glue in place. Next, glue the nose blocks in place.

After the rear tail block has been fitted, cut the tailplane and elevators from 3/8 sheet. Glue the tail in place then join the elevator halves with a wire and brass control horn. Add cloth hinges and mount elevator to push rod. Cut rudder from 3/8 sheet and position.

Canopy enclosure is formed from thick Cellastoid or suitable substitute and glued in place. If seats are included the canopy is added later. Make up engine bearer assembly on bulkheads N1, N2, and fix to leading edge, filling in the nacelle contour with block balsa, not forgetting the 'twin-jet' exhaust ducts at rear, and allowing space for the fuel tanks.

Entire model is now sanded very smooth and then covered with Modelspan. Give three coats of primer, sanding between each coat with 'Wet or Dry' paper until all pits and bumps are eliminated. The 310 is one of the most colourful private aircraft in production and details of the vivid schemes that can be applied are shown on the plan and in the photos on this page. Be careful to use masking tape with a clean edge when applying this decoration and you'll be rewarded with a model that is an eye-catcher wherever it appears." 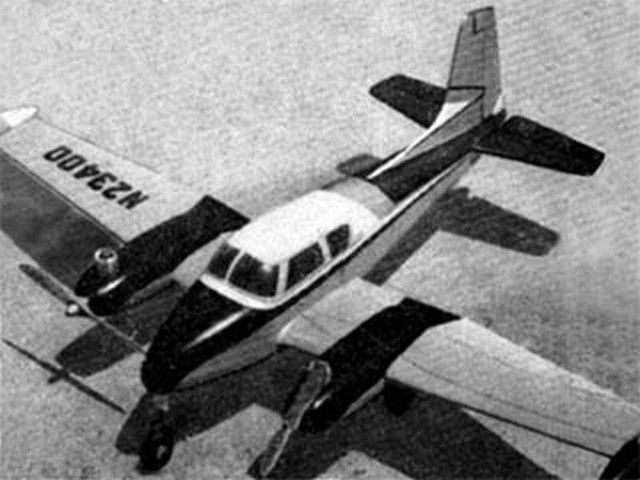