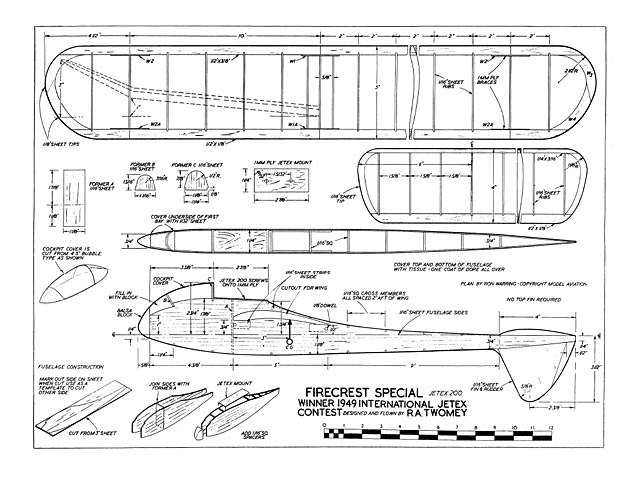 Firecrest is one of the few Jetex-powered models which has not followed conventional lines - that is, the high wing, pod-and-boom type with the underslung jet unit mounted in the rear of the pod. With all such layouts the line or thrust is very much below the centre of drag of the whole model, often with the result that the model is actually underelevated to prevent stalling under power.

With the jet unit mounted just above the wings the line of thrust coincides, or very nearly so, with the centre of resistance so that optimum trim can be obtained both under power and on the glide. This then enables a very efficient rigging to be adopted, where the centre of gravity is moved well aft so that the tailplane is carrying part of the total load. Naturally enough, the tail-plane itself is of lifting section.

For the wings, a Marquardt type aerofoil section was chosen as this has proved ideal for small, lightly loaded models, combining low drag for best climb with excellent glide characteristics at lower speeds. The Firecrest, in other words, is designed along best modern duration lines and as such has a flight ratio comparable with that of most free flight power models on limited motor runs.

The final design which won the Trophy differs from the original prototype. One of the main differences is that an underslung fin is used. The first model also had an upper fin of almost the same area, but this was not found necessary as adequate directional and spiral stability is achieved with just the bottom fin alone

Constructionally, the Firecrest should present no difficulties to the average builder. The fuselage sides are cut from sheet and joined with 1/16 square spacers and a 1/16 sheet former (former A), as shown in the detailed sketches..." 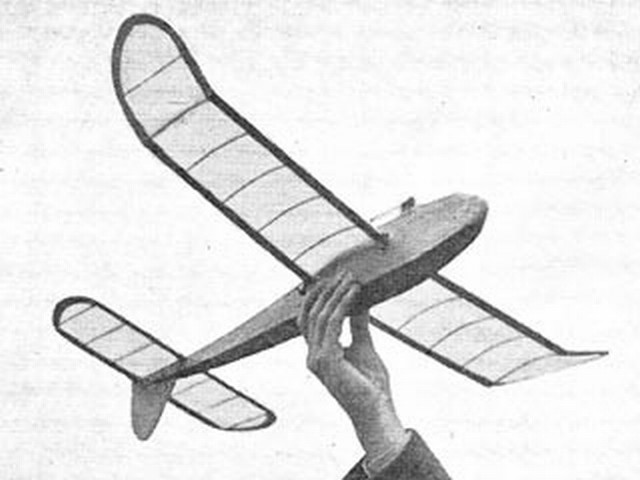