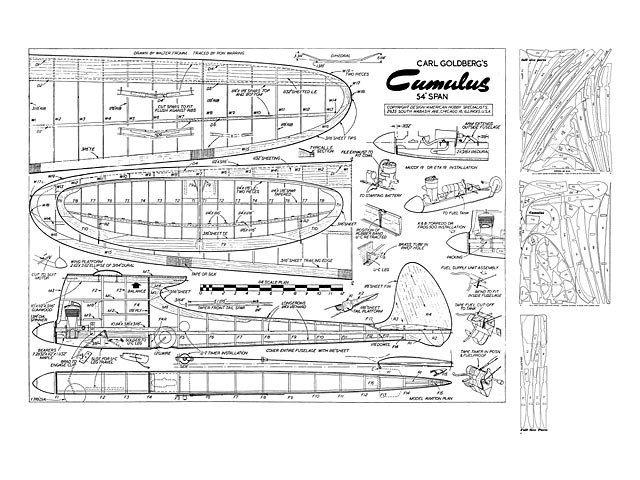 Goldberg Cumulus. Free flight gas model. This version of the Cumulus was published in MA 1950, the plans re-drawn by Bill Dean, prior to the launch of a Kiel Kraft kit of the Cumulus (circa 1952).

Quote: "A new American contest model by the designer of the famous Zipper (oz387) design.

A NEW free flight design by Carl Goldberg is quite an event in the aeromodelling world. it's now over eight years since his last one the Interceptor (oz7608) was kitted, and power modellers have long been impatient for a new design from the man who started the pylon trend.

In January of last year, Carl let us into the secret that he was working on a new F/F job and offered us the British publishing rights when it was ready. The model was to be called the Cumulus, after the thermal cloud so sought after by free flight fans. We could hardly wait to see the plans and were disappointed when Carl wrote over in mid-summer to say that he was still developing the design: Readers who subscribe to American model magazines will remember the adverts for the kit which started to appear at about this time. In actual fact, the space had been booked in advance at a tirne when it was fully expected that the Cumulus would indeed be on the market by mid 1949. As a matter of interest, the plans were still in the course of preparation at the end of 1949 and only recently has the kit become available to American modellers.

However, we think that modellers will agree with us that the final design has been well worth waiting for. The kit plans (upon which the MA drawings are based) are beautifully presented and Wally Fromm is to be congratulated on doing a fine drafting job. The construction is completely detailed in step by step sketches which eliminate the need for extensive build-mg instructions. Right from the start, we should like to point out that the Cumulus is an advanced model and the fuselage construction in particular is more complicated than, say, a Powerhouse (oz5506) or Slicker (oz814). But the builder will be rewarded for his extra labour by one of the sleekest and toughest contest models ever designed.

Well, let's get down to a general description of the model - starting with the fuselage. The Cumulus is basically designed around the McCoy 19, but most engines up to 6 cc may be accommodated easily. In all cases, gloplug or diesel power plants should be used - no provision being made on the plan for spark ignition accessories. The engine and al other working components are completely enclosed within the fuselage, much ion the same way as Shulman's Zomby (oz68). The detachable fuselage hull is like the lower half of a speed model..."

See more_pics for a scanned page from the Keil Kraft Handbook 1952-53 advertising this model saying 'price later' (thanks to Histone). 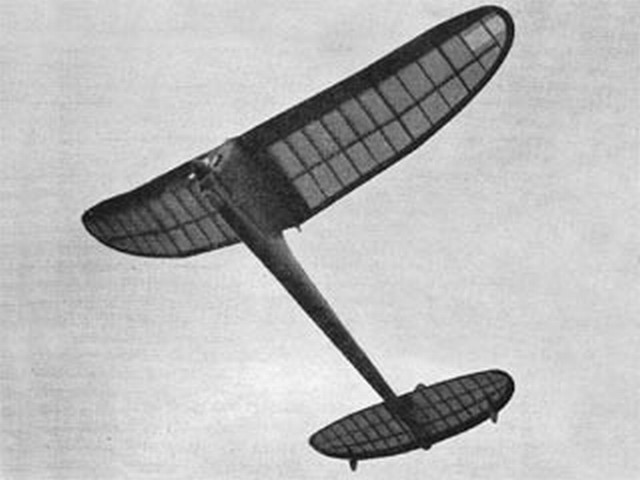