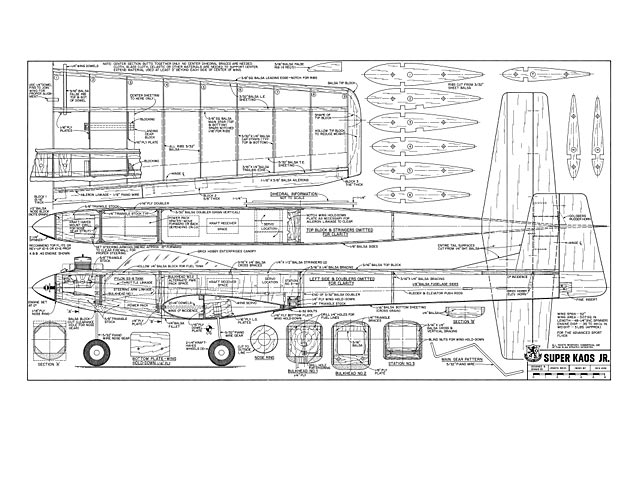 Quote: "Want to save some money on your model fuel? Have a smaller car and can't get your big one inside without driving with an open window for the wing to stick out? Or, how about just wanting to fly a great flying ship in the .40 range?

Before we get into the complete building directions, here are a couple of general comments we'd like to make. We simplified the process or mounting a nose gear strut bearing by drilling two holes in the Kraft-Hayes engine mount. It not only saves money but keeps the installation easy. Before you drill out the holes you need in bulkhead No.1, plan ahead and get them drilled before you install it in the plane - at least before you install the balsa block at the front of the fuselage. Once you get that block in place, drilling those holes gets hard to do. Also, secure the blind nuts to install the engine mount before you glue one bulkhead in place.

Now, on with the building.

When I first started thinking about this Field and Bench article, I had several thoughts as to the approach I wanted to take. I read through many past articles trying to get ideas about format and the type of photographs required. My only fixed position was that I was going to really 'tell it like it was.' Everyone knows that nothing is all good - nor all bad. Yet when you read most kit reviews, all is sweetness and light. Well, none of that for me. My evaluation was going to be thorough and critical. Then Walt sent me the Bridi Super Kaos .40. After having built and flown the plane, I have yet to find a valid criticism. There were some problems, but after due consideration I have concluded that the problems were a result of my lack of planning rather than a fault of the kit.

On with the project! Let's assume that you have gotten the kit through the door, have suc-cessfully explained to the wife why you need another airplane and are in the workshop ready to build. The first thing that strikes you is the size and sturdiness of the box. This probably seems like a small point, unless in the past you have spent an evening trying to repair parts broken before you even touched them. Also, the box sports a small label describing the contents of the kit. When I see a kit box printed up like a billboard, I always feel as if a couple of bucks of my money goes to the printer rather than to buy balsa.

Inside the box is everything you would expect to find in a quality kit and then some. Right off the bat you see rolled, full-size plans and a separate instruction sheet with lots of photos. There are no die crunched parts. All pieces are machine cut. The wing ribs are wrapped in paper. Smaller wood parts are sealed in plastic bags and sorted according to their intended use. The large balsa blocks are rough shaped, and even the wing sheeting is precut to proper angles. Wing spars, leading and trailing edges are all pre-notched.

Also included is a hardware package, a Kraft-Hayes engine mount and a beautifully formed, heavy wall canopy. Last but not least is the formed 5/32 wire landing gear. Someone has finally figured out that the landing gear wire is enemy number one to the balsa parts inside the kit box. Therefore, all wire parts are wrapped in a protective paper pad. All in all, very impressive thus far.

When building a kit, the first thing I do is examine the kit parts and the plans to determine what accessories are necessary. I found that the following items were required to finish the kit: 2-1/4 diameter spinner, two sets of 6-32 screws, one set of 6-32 blind nuts, 8 oz fuel tank, fuel tubing, fiberglass cloth and resin, nylon wing hold-down bolts, four clevises, push rods (Goldenrods), hinges, three 2-1/4 diameter wheels, 5/32 wheel collars, wing covering material and finishing paints. Taking into account that much of the finishing material will be left over, it will cost you about $25 to get the plane in the air, in addition to the engine and radio.

For some reason I always start an airplane by building the wing. The Kaos was no exception. The instructions recommend that a jig be used to fabricate the wing. Thinking that most modelers don't have wing jigs, I chose to assemble the wing using the building board method also described in the instructions. The wing came out perfectly, I attribute the trueness of the wing to the exact fit of all the wing parts. Without a doubt, the most precisely cut pieces I have ever seen in a kit. One of the nice features of the wing construction was the use of 3/32 sheeting. The extra thickness allowed a considerable amount of sanding to achieve a perfectly smooth surface without sacrificing any strength.

The wings halves are simply butt joined with no internal bracing. Joint strength is added by covering the center section of the wing with a 6 in wide fiberglass tape. I wasn't too sure about this arrangement, but numerous flights and one pretty good crunch have proven the wing to be extremely strong. The main landing gear is mounted in the normal manner. The wire is bent in such a way as to allow for an extremely wide stance and results in excel-lent ground handling characteristics.

The fuselage is of simple box construction, quite light and quite strong. However, you will get into serious difficulties unless you give considerable thought to the fuselage assembly. Although the Kaos .40 appears to be a good sized airplane, getting all the equipment installed is really a shoehorn job and requires pre-planning.

First of all, all holes in the firewall must be drilled and blind nuts installed prior to gluing anything together because it becomes an impossible task once the firewall is attached to the fuselage sides and top. The fuel tank installation also must be set up in the early stages of construction, as the tank compartment becomes inaccessible in short order..." 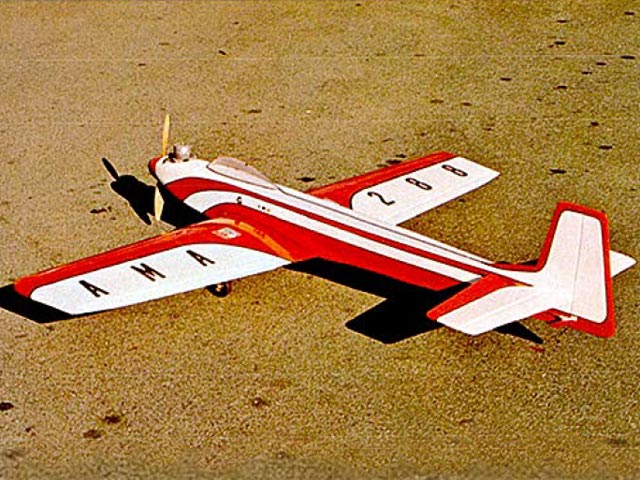 I've attached a few photos of my recently completed Super Kaos Junior [more pics 006-009]. In honor of the United States Fourth of July holiday, I've chosen a red white and blue scheme. Thanks for all you do.
LarryWelle - 23/06/2018
Add a comment