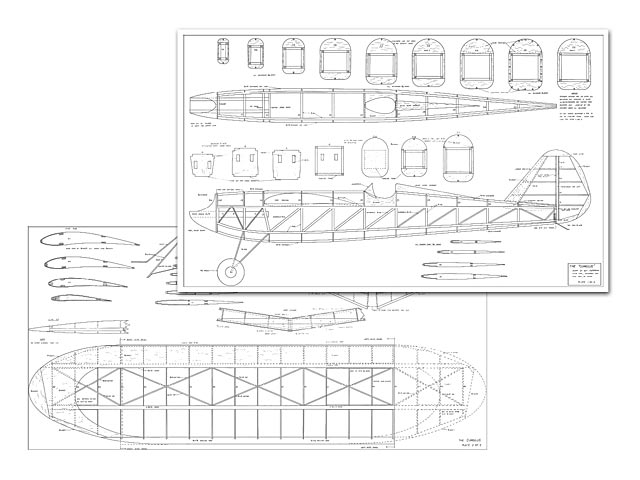 This full-size plan seems to be a faithfully drafted enlargement of the original Cumulus drawings that were printed in Flying Aces 1937. This is good because the original drawings (see supplement file) needed a lot of scaling up and did not show details like individual wing ribs. Plan says 'Drawn by Ben Shereshaw' but that might mean model design rather than actual drafting(?).

Quote: "Construct the 'Cumulus', by Ben Shereshaw. There's no thrill to compare with the joy of handling a real airplane in flight.! But perhaps the nearest approach is to launch a sky-scooting gas job into the air. And great indeed is the enjoyment if the gas fan has made his plane himself. You are assured of satisfaction and success in gas model flying, if you'll build this new ship of Shereshaw's - the 'Cumulus' - for she's inherently stable. And what's more - she's easy to build!

IN designing this Cumulus model for Flying Aces gas model fans, I have tried to combine scale appearance with con-test performance. In other words, the Cumulus - named after the massed cloud formation - is a ship that not only looks good, but also has what it takes when it comes to satisfactory performance.

Because of her high thrust line, she is an extremely stable flyer and you can depend upon her every time - if you carefully follow my instructions for building her. She has a good glide ratio - around fifteen-to-one with power off.

In preparing these instructions, I have assumed that the out-and-out amateur would not yet be ready to build this gas model. So while the Cumulus is really an easy ship for the chap who has had a little model making experience (Herb Denaci, who built the original model from my plans, is sixteen years old), I have glossed over the details that such a model hobbyist would normally know and have stuck entirely to the straight, practical end of the construction.

If, however, any reader should run into difficulties in connection with this model, he has only to drop me a note with a self-addressed, stamped return envelope and I'll do my best to straighten him out.

Fuselage. The first step in building the fuselage is to lay out the side elevation. This is done by scaling the side view up to full size, with an architect's or mechanical engineer's scale. The longerons are made of 1/4 by 1/4 hard balsa, and are selected for their uniform texture and even bending characteristics - since longerons having variable bending qualities are apt to distort the fuselage.

See that each member makes a snug fit, and do not try to correct a poor fit by filling the crevice with cement. Use the very best cement available, and proceed by cementing all the compression and diagonal members securely in place.

The next step is the assembly of the fuselage. Our top longeron being straight and the lower one curved, it is easier to assemble the fuselage inverted. Start by cutting the cross-members, then cementing the center portion of the fuselage together. Be sure to cement both the top and lower members to the fuselage sides at the same time, Following this procedure, work back until you have reached the stern post..."

Added article, thanks to Orange&White. 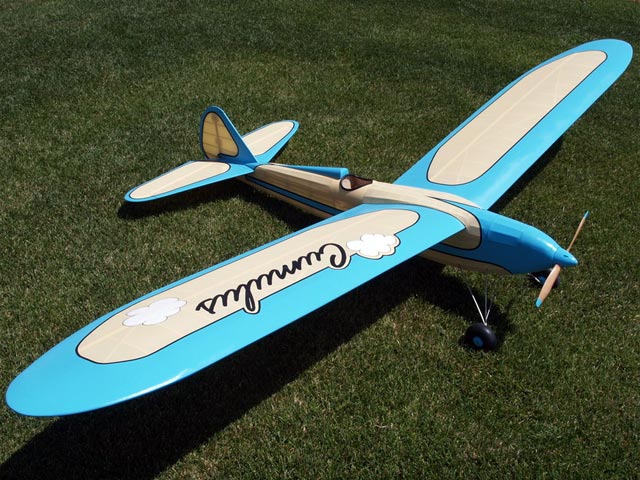 The completed model Cumulus photo is from http://frannybrodigan.com/Cumulus.asp which is a great build article with some very fine pics showing an RC electric version of the model.
SteveWMD - 27/02/2014
Hi Steve, Here's a photo [see more pics 003, 004] of a recently built Cumulus from the 1937 magazine. Powered with an Ohlsson 60 and has a Futaba radio. Builds light and is a real floater. Cheers,
SteveRemington - 17/06/2014
Hi Steve, I see the invitation to submit picture of Cumulus. Here are some of mine [see more pics 005, 006] ...it is slightly scaled down I pulled it down to 83 inch span to optimise it for our vintage competition rules. I drew up my own plans from the 1937 article but they were just working drawings. 5363 is pretty faithful to the original.
AllanKnox - 08/07/2015
Hello Mary and Steve, the Cumulus [more pics 007] is by Ben Shereshaw from Flying Aces 1937, 96in span, IC F/F. I dropped the wing position slightly to mount the wings without rubberbands showing, otherwise, it's per plan converted to RC and electric motor. Build for it is in RCGroups and video is here https://www.youtube.com Ben Shereshaw certainly knew how to design a nice model and he would have been chuffed to bits to read in a recent newsletter covering Cocklebarrow vintage flyin that "the Cumulus was probably the most elegant model there". I know I was. Regards
JohnL - 01/04/2016
Add a comment