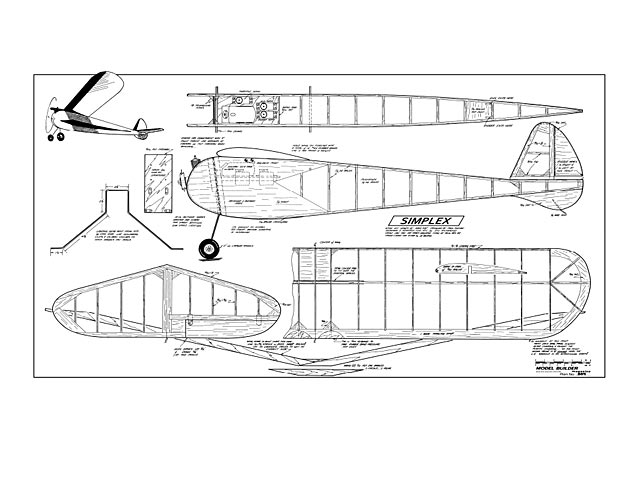 Quote: "It's a widely accepted fact that Old Timer free flights with radios installed make excellent R/C trainers, and the Simplex is one of the best. Ultra-simple to build, too. Paul Plecan's 1941 Simplex. By Stu Richmond.

Much of the fun of reading model magazines is the chance to see and study construction articles. The first thing I do each month when MB arrives is check out the center spread and then look over the remaining plans.

We model builders owe much to the talented handful of plans tracers and draftsmen who do the needed work for construction articles to appear in print today. In the late 30s and into the 40s, Paul Plecan traced and drafted many modelers' plans for publication. You can bet that at times he must have been fed up with the designer's complications and intricacies. When Paul designed his own few models they reflected his urge for non-complication. His Simplex was the peak of simplicity. A quick look at the Simplex plans shows this to be the epitome of fast, easy construction.

I've always been sensitive to the R/C training needs of newcomers to our hobby. When I found the Paul Plecan construction article for his Simplex in a 1941 Air Trails magazine, it seemed well worthwhile to scale up the plans and build it, but to incorporate equally simple modifications like hardwood wing spars, about 7 degrees of downthrust along with 3 degrees of right thrust, about 40 percent of the fin converted to moving rudder and about 15 percent of the stab converted to elevator and sheet balsa sides up front locked together by a plywood servo tray. I figured the resulting Simplex would probably be about the simplest building and flying R/C trainer in the air - and I was right. Rank beginners have had fun with my prototype.

Flights average 20 minutes with the K&B Sportster .20 on a 4-ounce Sullivan slant front tank. We've had lots of long thermal flights. We've had to cut the power to idle and spiral down repeatedly from Florida thermals lest we lose the model visually. Flying buddy Ed Stone got the Simplex into a Florida boomer (thermal) of the greatest vertical rise rate we'd ever seen. He flew it the highest it's ever been!

1. The 1/4-inch wide by 3/4-inch high wing spar must be of spruce or bass for adequate strength. It may require gluing together two or three pieces to get up to final size. Strength is then plenty as the model will hardly loop and won't be aerobatic.
2. The tail should be built of firm but very light balsa as there is practically no nose moment to counter the weight behind the wing spar. Balance point should be at the wing spar.
3. Trust me, one elevator is sufficient and simplest. Yes, full 'up' does give a bit of right turn and full 'down' gives a bit of left turn. No problem near neutral.
4. Construction is well-suited for today's iron-on coverings and is not strong enough for silk and high-shrink dope.
5. Keep all your radio gear as far forward possible. My 500 mAh battery pack is right behind the landing gear and my model balances right on the wing spar with no extra weight added.

1. Most of the drag from any normal model wing comes from the wingtips - same on full-size aircraft. By adding wash-out to each wing panel the drag is minimized at high speed and increases at nose-high lower speeds. Modern jet fighters, Piper Cubs and 747's all feature wash-out. The Simplex benefits from washout similarly. Just twist the covered wing and heat with your heat gun until you attain the specified washout shown on the plans.
2. These plans show the correct down-thrust and about three degrees of right thrust, which helps counter the torque of the big prop.
3. Original plans showed a 13-inch prop on a Dennymite engine. This replica flies best with a Master Air Screw Antique Series 12 x 6 that even looks like the old Flo-Torque props. My engine is adjusted to not exceed 5000 rpm and it idles all day at a fantastic 1400 rpm. I chose a new K&B Sportster .20 due to the muffler's excellence in annoyance suppression (no, I don't like the word 'noise'). This engine, in conjunction with the 12 x 6 at 5000 rpm yields quietude that surely rivals electric flight! The prop/rpm combination yields two to three times the crimb rate of current ferrite electrics.
4. You can easily surpass 15 to 20 minutes of flight time every flight on the four-ounce fuel load.
5. The wing loading is to low it lets the Simplex fall in the 'super plane' category on Francis Reynolds' interesting cube loading chart. Yes, there is a relationship between carrying capacity and the volume inside our wing covering..." 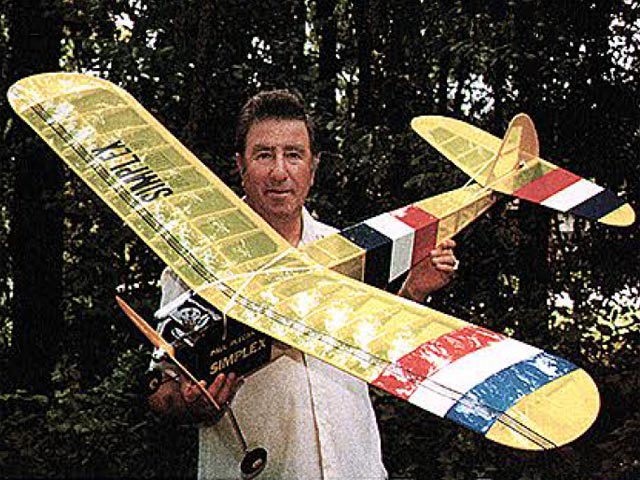