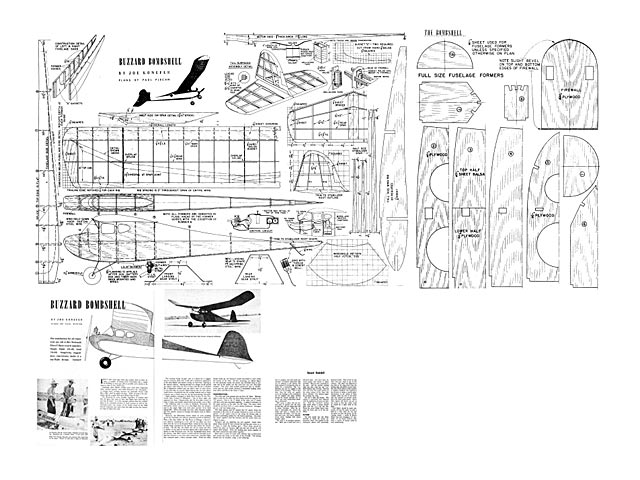 ABOUT four years ago when gas models were in their infancy, a number of dreamy-eyed individuals had a mania for building as many gas jobs as possible and a desire to fly them as often as they found time. Gradually these fellows drifted away from their respective clubs, banded together, and called themselves the 'Buzzards'

The Buzzards fly every Sunday regardless of weather and they all agree that some of their best flights have been had in two feet of snow! It is this constant practice that has enabled them to be consistent winners in local contests as vitell as the National meets - the winner of the Senior event in the 1938 Detroit Nationals also came from this club, as does the winner of Class 13 Open this year.

The constant flying brought with it a desire for a rugged, easy-to-construct plane that would add a distinctive appearance to the mass flights and banner towing we have been running at the various contests. Having decided on a design, we all started our planes - and when the first of them took the air. it climbed like a frightened mallard and just didn't want to come down. It was then that we secretly began hoping that our new planes would throw a bombshell into the coming contests and so began a frantic race to finish them for the fast-approaching Nationals.

Eight members managed to finish them in time for the Wisconsin State Contest in Milwaukee. Out of these eight, one captured the State Championship and the first-place award in Class C Open, and another placed third and another won a fifth.

The following week in a meet in Madison, Wisconsin, the Milwaukee winner was lost on its first flight after six minutes, and on this single flight won tenth place, another of its flock taking fifth. Before the month was over, other Buzzard models had won another second in Chicago and placed twice at Beloit, Wisconsin.

However, our Milwaukee winner which we were counting on for the Nationals was still lost somewhere north of Madison. Then a few days before the Big Event in Chicago, a farmer's cow shied at something in a tree and the lost plane was soon back with the rest of the Buzzard flock - which by this time was rapidly being completed in the last few days before the Fourth of July. On this day, the bunch was out en masse and after a number of test hops on the new planes and a short prayer of thanks to that Wisconsin cow, the first Bombshell burst down the runway - and didn't return to earth until the National record had been boosted to over forty-nine minutes by a beautiful flight that remained under a fleecy cumulus cloud. When the cloud finally broke up. the Buzzard model descended to land within the bounds of the field. On the remaining two official flights for this particular model, the motor was throttled down to prevent loss of the model - yet the total time was over fifty-eight minutes. The other club models performed just as satisfactorily and the final results showed a Bombshell holding down first, third, and fifth in the Class C Open.

Construction: The sides and front gussets are cut from 1/8 balsa. Medium balsa is used for the sides, but hard balsa should be used for the gussets. Due to the 4 in depth of the sides, two sheets will have to be butt-cemented together. A splice is necessary in the upper portion, as the sides are 48 in long. The motor skids should be cut from birch or some similar hardwood. Stringers are 1/8 x 3/8 hard balsa strips..."

Note this is not a full size plan, this is a scan of the original magazine pages as printed, so it includes layout drawings that will need to be scaled up along with some full-size template drawings.

Article pages are included in the planfile. 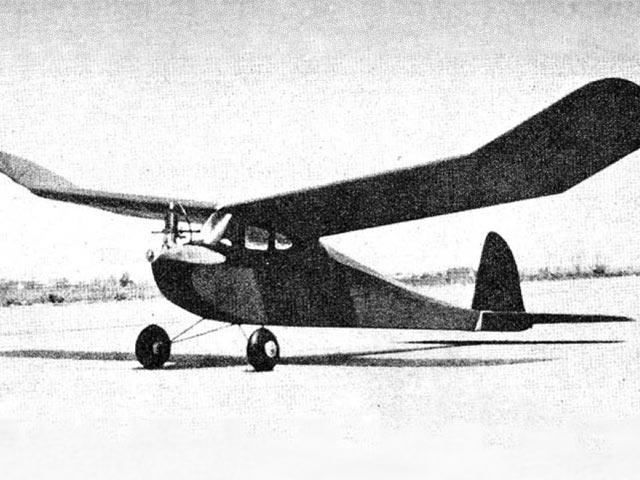