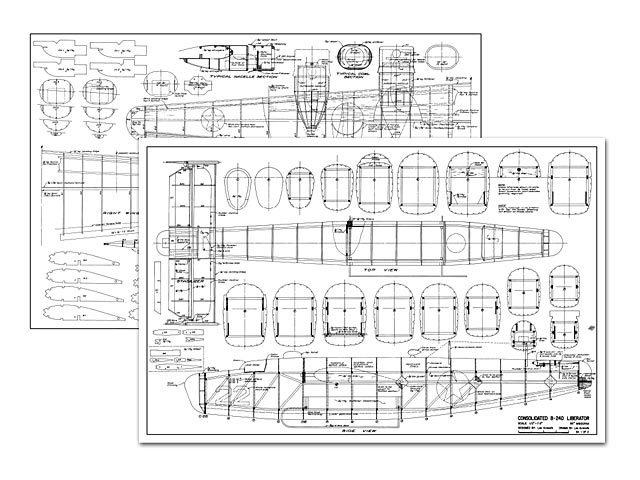 Quote: "Would you believe - a 55 in wingspan, four-engine, radio controlled, three-channel Consolidated B-24D Liberator with an all-up flying weight of just 36 oz? This particular Liberator was an early production model from the San Diego factory and saw service with the 28th Bomb Group, 11th Air Force in the Aleutians.

I have always wanted a multi-engined model, but never could find a reasonably priced kit or one close enough to scale to suit my needs. Everything about this aircraft seemed to fit what I had in mind - at 1/2 in scale the wingspan is 55 in, compact enough to fit in almost any trunk without removing the wing section, making it a simple task getting to and from the field. By keeping the construction very light, four 020 Pee Wee RC engines furnish enough power for a realistic and responsive flyer, and at a relatively low cost. The high wing and motor configuration allow the use of skids for landing without snapping props and that means wheels up performance in the air without the need for the retract gear, extra channel or heavier construction to accommodate them. Takeoffs are accomplished with a dolly or by hand launching; landings are much easier on a grassy area but are also possible on blacktop.

I thoroughly enjoy building a model and this type of construction is, in addition to being extremely light-weight, very satisfying to the meticulous builder and easily reproduces scale contours. You might say it is the other end of the stick from the slab-sided or high performance jobs. This model is exact scale in all proportions except a slightly modified airfoil. The covering material is Marlow Jap tissue which is available in olive drab, neutral grey and black and finishes nicely with two coats of Sig Lite-Coat dope.

The radio used here is a Digit Migit three-channel, controlling throttles, elevator and coupled aileron and rudder. Four servos could be fitted in the available space, and I doubt that the additional weight would seriously affect the performance. Since installation requirements for different radios and personal preferences are so varied, I have only briefly covered the actual component installation in the text, but the photos show how mine was done and it works quite well. The battery pack can be shifted forward in the fuselage to change the CG which is shown on the plans at the furthest aft position which is safe to use. A 1/4 - 1/2 inch ahead of this position is all to the good.

Assuming you have adequate tools and equipment for building, the construction of this plane is quite simple and follows the procedures for any stick-and-tissue airplane - remember the old Cleveland kits..."

Update 15/04/2018: Replaced this plan with a newer scan, thanks to Circlip. Also combined two duplicate entries into one listing - got article and pics now. 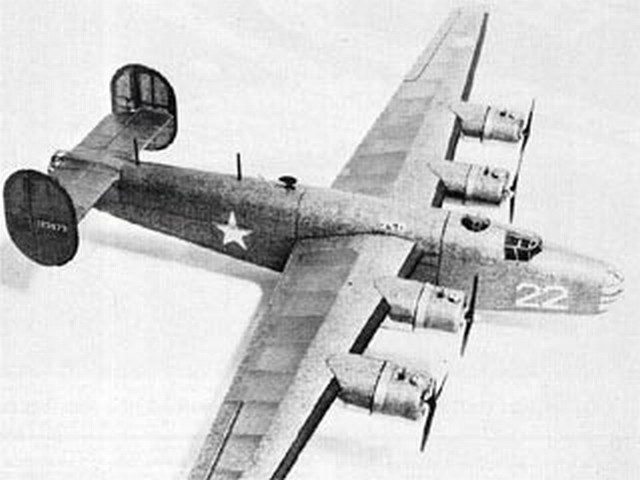