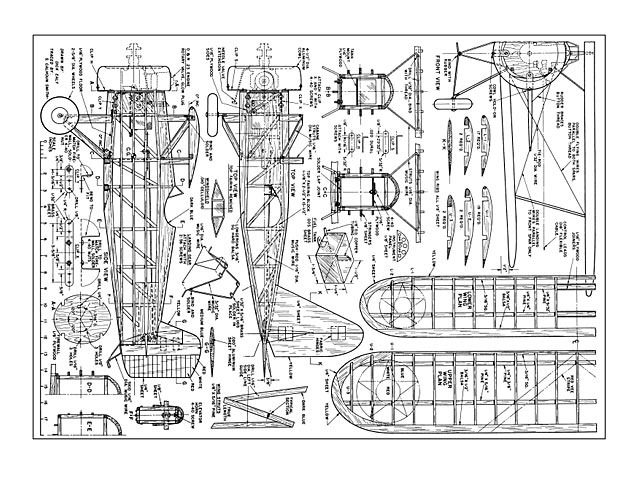 Quote: "The trim little P-12 fighter developed by Boeing was queen of the skies during the late '20s and early '30s. The Army designation was the P-12 series, while the Navy's was the F4B series. In appearance it was similar to World War I fighters. Although the aircraft of the late '20s had the benefit of better materials and more horsepower, they did not change too much in performance and tactics from the World War I types. Combat was still considered more of a personal duel involving intricate stunts.

The ship described here, the P-12C, was capable of flying 179 mph and had a ceiling of 30,000 feet. Since the plane lacked wing flaps, pilots side-slipped, and fish-tailed their rudder in landing to prevent the plane from 'ballooning' across the field and to insure pin-point landings in small airports.

This scale control line model of the P-12C is on a one-inch-to-the-foot scale, and makes a fine flying craft.

Start construction with the fuselage. Both sides are made from 3/16 in square hard balsa. When the cement is thoroughly dry, separate the sides. Notch the longerons at station E. Bend to fit as shown in top view, and install firewall and all cross-pieces as indicated. The diagonal brace across cockpit may be omitted for realism.

Construct the center wing struts as shown in detail 'B' and 'C,' then add the 1/16 in plywood floor and 1/18 in plywood sides. Form the landing gear and bolt in place, and make clip X and clip for the motor mount. Install to fit the Ohlsson 23 engine. Alter as necessary for other radial munted engines. Next add the gas tank and bellcrank. The fuselage top cowl is carved as shown..." 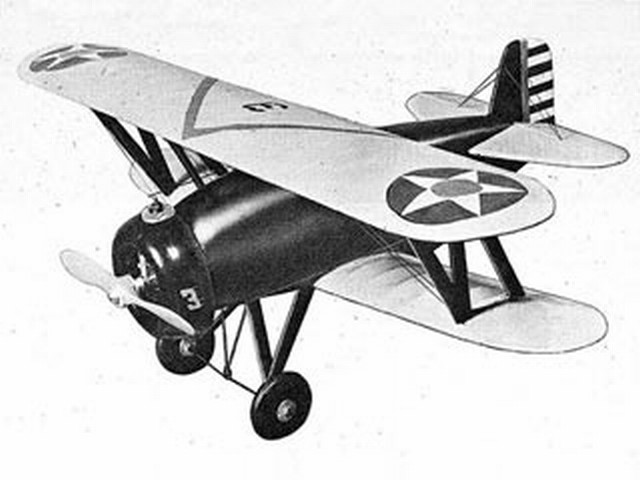