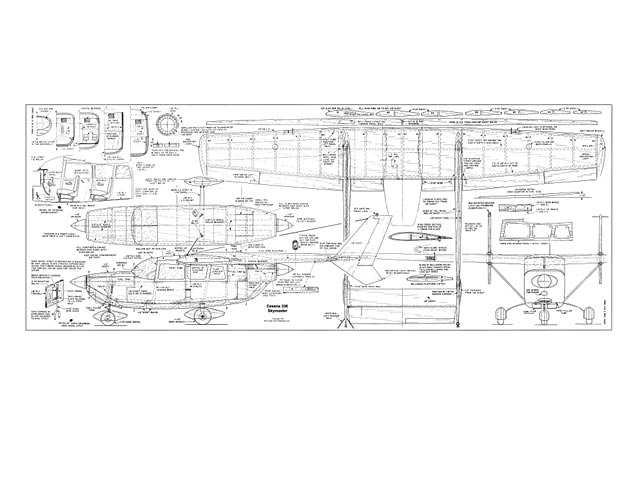 Quote: "One of the most interesting businessplane designs of recent years, the Cessna 336 Skymaster is a marvelous subject for twin-engined models. Unlike other twins, its 'center-line thrust concept', with push-pull powerplants, permits a minimum of upsetting forces after one engine conks out. F/F and R/C fans alike should be enthusiastic over Cessna's center line thrust concept, as CLTC craft continue on course relatively undisturbed after one engine has quit.

After ribs and spars are cut out, assemble wing spar with aid of spar braces. Dihedral should be as shown. Ribs are cemented to spar first, then 1/4 sq balsa LE and 1/8 sq ply TE. If a power saw is not available for stripping up 1/2 ply for TE, then 1/8 pine or spruce will do the job. Flap control horns should be formed and installed at this stage (before top sheet covering). Aluminum straps about 1/16 x 1/8 are used, being wrapped around the control horns and TE. Cover the bottom of the wing with 3/32 sheet (be sure this is done before mounting bell-crank or flap-actuating 'L'-crank.

After bellcrank and L-crank are installed, make inclined lead-out holes in wing bottom. Cement 1/8 in OD tubing in these holes to minimize wear due to lead-out wire movement. To make an easy job of mounting the booms and stabilizer, make push rod 8 in long initially. When tail booms and stabilizer are in place, remaining push rod length is soldered on. Secure front end of push rod to bellcrank with washer soldered to push rod end. Check actuation of bellcrank for smoothness, then plank top of wing, add tip blocks, ailerons and flaps.

Cut four blanks for tail booms from 1/4 in sheet, working as accurately as you can in cutting the wing opening. Careless work at this stage can result in one boom drooping more than the other - nothing looks worse in a twin-boomed job! Boom cores of 1/8 sheet (2) are needed, plus a pair of rudder supports cut from 1/8 ply. Note that clearance for the push rod is cut out of the inboard support. Flyers who prefer the standard counter-clockwise flying direction will want to hollow out the left boom for push rod clearance.

Only the outboard 1/4 in blank is cemented to the 1/8 core of the left tail boom - access is needed for sub-sequent push rod installation. In laminating the right boom, do not forget rudder support. It is very hard to install in the assembled tail boom. Carve and sand tail boom as per section..."

Quote: "This is a scale model of the first version of the Cessna 336 Skymaster manufactured by Cessna between 1963 and 1965. It had fixed gear and poor performance. It was replaced with the Cessna 337 Super Skymaster with retractable undercarriage and more streamlining. It was made until 1980. Robert Welch designed and made this beautiful control line scale copy of the 336 with two .15 Fox engines and way back in 1963. It won the Control line scale championship in the American AMA Nationals of that year. This model was published in American Modeler July-August 1964 issue. Who will be the first modeler to make a RC version to commemorate the fiftieth anniversary of its publication? Best wishes to all from Colombia, Eduardo". 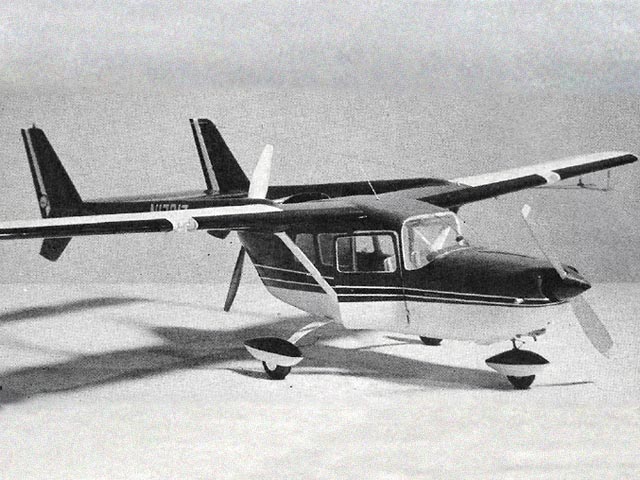