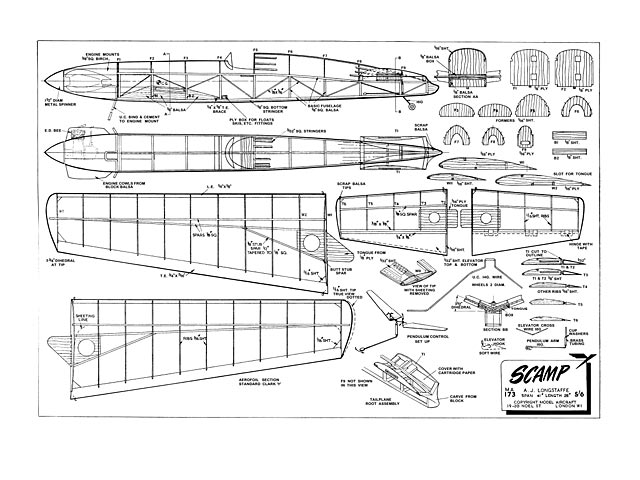 Quote: "An interesting semi-scale design with a pendulum-controlled vee-tail. Scamp, by A Longstaffe.

SEEKING a change from contest models, I decided to build an out-of-the-rut semi-scale job which would not be fussy about the weather; Scamp was the result of a week's doodling, and was put on the board and built in about fifteen evenings. The pendulum-controlled vee-tail arrangement definitely makes for entertaining and stable flight and allows a more scale-like wing dihedral to be used, avoiding the 'folded wing' effect of most low-wing models.

Construction: Building the model is quite straightforward and follows usual practice. Particular care should be taken in cutting the plywood parts as these are the key to the whole construction.

Fuselage: Start by building the main fuselage frame in the usual slab-sider fashion, joining the two sides initially with formers 1 and 2, complete with bearers, and former 9 complete with tailwheel leg and pendulum assembly, less its crosspiece at the top. On completing the basic frame with wing-box, etc installed, the top formers may be added, and the tailplane box firmly cemented on top of the longetons. Build up the tailplane root assembly as shown in the sketch and cover with cartridge paper. Now add the stringers and 1/16 sheeting. The 'business end' should now be assembled commencing with the shaping and binding of the undercarriage to the bottom bearer. Fit the engine and all its accessories in place and build the cowling round them. The shape of the 'apple-cheeks' is largely a matter of choice as long as they give about 1/16 clearance around the cylinder head and have substantial cooling inlets and orifices.

Wings and Tail: Take particular care in cutting the tongues and root-ribs accurately as these determine the dihedral angles. Check thoroughly that each wing has the same incidence. The outer wing ribs are cut in the usual way by sandwiching the rough shapes between the root and tip ribs. The elevator hinges could be substituted by a wire arrangement with advantage, but the tape ones have given no trouble on the prototype.

Make sure that the elevator control cross-piece is securely soldered square and at right-angles to the pendulum arm. Bind the control loops firmly to the elevators and cement tape over the joint. The small rubber band hooks on leading and trailing edges are a safeguard against components vibrating loose - one rubber band is sufficient for this job. The original model was covered with lightweight Modelspan, the fuselage being double-covered. Being averse to too much coloured dope, I put it only round the cowling and along the fuselage decking. Thoroughly fuel-proof the inside of the cowling and put a thin coat over the entire fuselage - wings and tail do not require it.

Trimming and Flying: Check that the undercarriage runs true as the take-off run is fairly long and ground-looping soon eats through your stock of props! Trim initially over long grass on a reasonably windless evening. Adjust the elevator loops backward or forward as required to provide a slightly nose-heavy glide with no turn. Initial power runs should be of about 20 seconds with low revs. ROG is preferable as it does not upset the pendulum so much as a hand launch.

The original model has a take-off run of about 55 ft, straight climb to about 30 ft when it goes into a fairly tight right-hand circuit climbing grad-ually to about 150 ft in 40 sec. The glide is straight, fast and slightly nose-heavy in calm air, but in a wind the model 'soars' on an even keel." 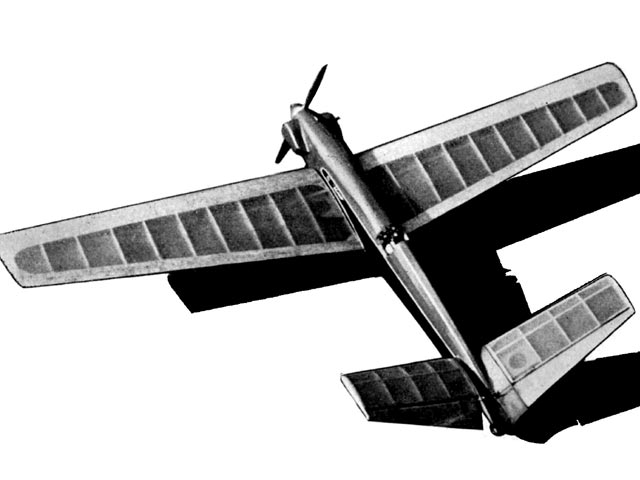