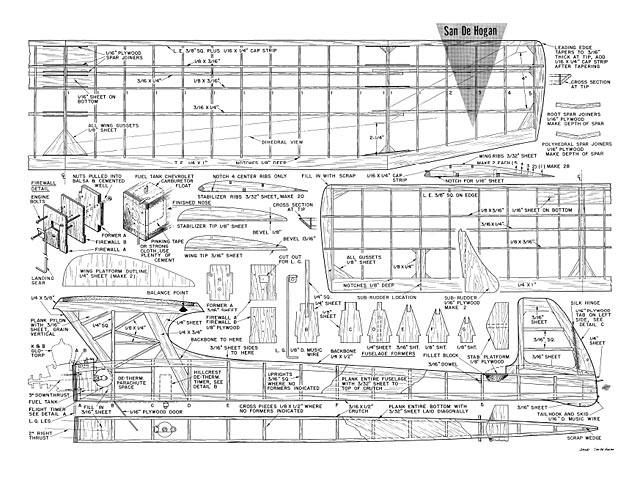 Quote: "Here's one of the outstanding free-flights of all time. San De Hogan, by Dennis Davis.

WHY San De Hogan? It's a combination of 'San Diegan' and Hogan - the latter inspired by a now famous local California disc jockey, the former handle in honor of the ship's hardy ancestors.

The job was designed, flown, rehashed and generally run through the mill before the plans presented here were drawn. An important contribution was the local all-year-round flying weather which made it possible to literally fly the dope off the ships; not only by me but by some promising young junior and senior modelers who gave the design a great deal of help and contest proving. The youngsters have done very well with the ship too - needless to say the design was arrived at largely with them in mind.

Consistent competition demands a lot of any model design - with ruggedness a most important factor. Achieving strength yet light weight was the consideration which finally led to the finished, ready-to-build product presented here. A low-drag factor was achieved by incorporating a thin, flat undercamber wing section and a minimum fuselage profile with very small cross section. The low drag shows up in the climb, which incidentally is the ship's middle name. Altitude and hardware are synonymous with this baby. Install a hot .29, put in some preliminary test time, then start opening it up. Don't be afraid to use plenty of downthrust and some more right thrust, but we'll say more on adjustments later.

The ship has quite a reputation on the West Coast, the latest achievement being the Class C record ( with K&B 32) of 30 minutes total for three flights at the Bakersfield meet this year. It also netted 1st in Class C and won the Sweepstakes trophy for high time of the day. A Class A version (flown by Bill Trumble, one of the youngsters I spoke of) placed 2nd. First in Class C open at the '48 Detroit Plymouth Internationals was its first major achievement. Also, it has many 1sts, 2nds, and 3rds to its credit in contests here on the coast, including our rugged All-Western Opens. Tom Moffitt, another youngster who has added laurels to the design, placed 1st in Class A junior and 2nd in Class D junior at the Detroit Internationals with the design, and 2nd in Class A junior at the Nationals in Olathe last year.

Construction of the model is largely orthodox, some of the important points being illustrated on the plans. Wing and tail construction is simple and needs little explaining. An aluminum template of the main wing and tail ribs should be cut out and used in cutting out the ribs (cut around template on 3/32 in sheet with blade). Pin ribs together after they have been cut out to cut spar notches. This is a big help and time saver (skip spar notches on tip ribs). Don't put the two top spars in until wing has been assembled and all dihedral installed. Don't forget spar and leading and trailing edge reinforcements and triangular gussets..."

Quote: "...the original Sandy Hogan from Air Trails Nov 1949, along with the article. This plan is prior to the Sandy Hogan versions kitted by Berkeley (which by the way is officially called Sandy Hogan 70), and the original is quite a bit different (well in details and size) by those Dennis worked with Berkeley to kit." 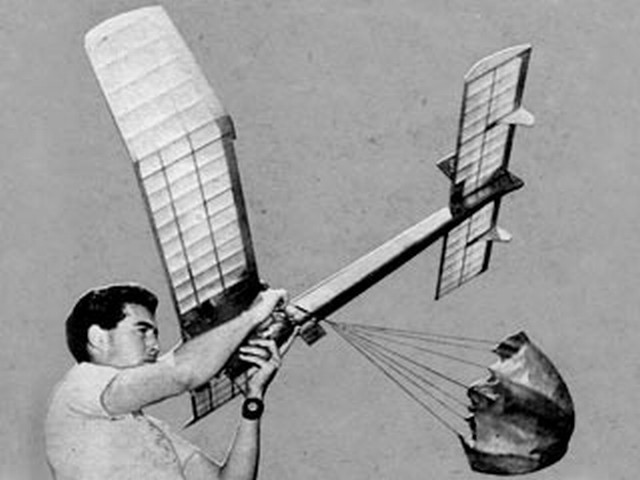