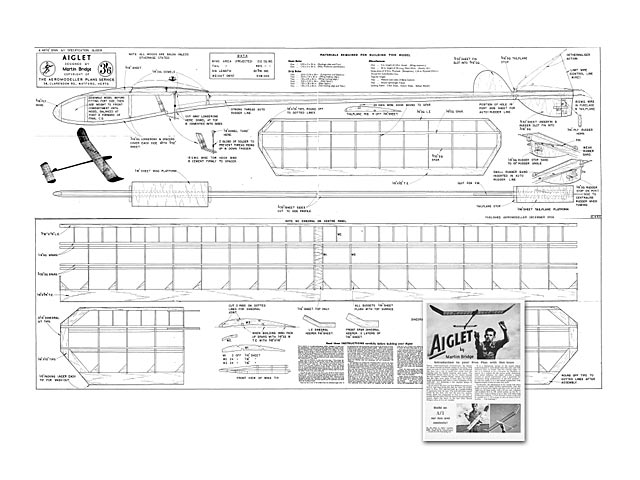 Quote: "Introduction to your Free Plan with this issue. Build an A/1 for fun and contests! Aiglet, by Martin Bridge.

WHEN AEROMODELLER INTRODUCED the Nordic A/1 glider formula to British readers in our June 1955 issue, we made no claim for originality: but emphasised that here was a size of mode/ that would meet the pressing need for shorter duration, club events. The subsequent interest shown in the A/1, mainly through the very popular Golden Wings (oz3715) design, has indicated that the clubs were quick to seize upon the smaller model specification and there is every indication of the half-size A/2 becoming a very popular feature of inter-club contests.

As we said at the time, our local Watford and District MAC had been flying the class for some six months prior to May 1955, and had built up a useful backlog of experience with the type. The club still holds regular events for the class, and over the past two seasons, design detail has progressed so that we are able to present full-size plans with this issue of the appropriately named Aiglet - the latest in the line from Martin Bridge's series of five A/1 models.

It is a cleaned-up version of the square-tipped model featured in April Model News this year, and with attractive lines, no matter what the viewing angle, we feel it is destined to be a favourite for beginner or expert. As a subject for the novice under instruction from senior clubsters, the Aiglet provides a simple exercise in model construction with a guarantee for satisfactory flying performance in the final product - so why not tackle it as a one-model competition with beginner/expert classes in your own club?

Technically, the refinements of A/1 design boil down to provision for stable towline performance, plus the ability to circle fairly tightly and give a low rate of sink. Aiglet has all these assets, with a 23 percent tailplane and modified MVA 301 airfoil section on the 10:1 aspect ratio wing to bring it up to date with latest high performance fashion - a well trimmed version could well be capable of a 1:45 average in calm air from a 164 ft towline - get building!"

Quote: "Hi Steve. Here's the construction article for the Aiglet, a simple but very sweet flying A-1 glider, published in the December 1956 Aeromodeller. It was very popular back in the day, and still appears here and there today. I built several myself and enjoyed them very much. I wish I could give appropriate credit, but I don't remember where I got the article from - it's been on my hard drive for years. Cheers," 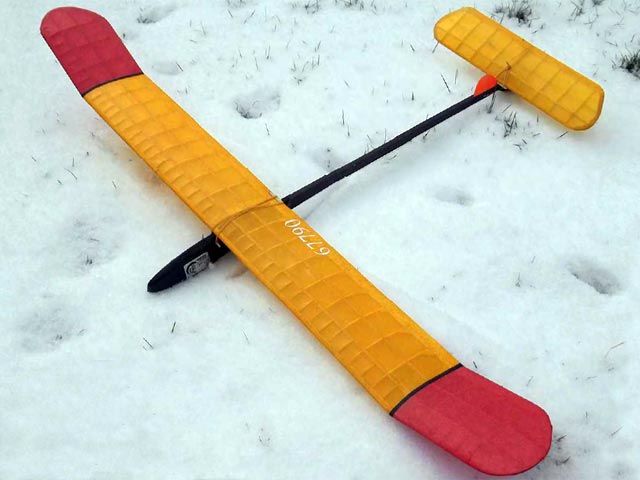 Hi, I just found the plan of the 'Aiglet' on your website. I made one when I was a kid and was learning how to build planes. I can’t tell you how happy I am to find it ! Thank you for sharing all these plans so they don’t get lost or forgotten !
Antoine - 08/08/2014
Hello to all, Just like Antoine in the last comment I also built one at a young age and it was one of my first A1 gliders. This model did fly very well once off the tow line, what it did lack for me was directional stability while on tow, if it started to tow of line it would not correct itself, nothing to do with not being directly into wind or no wind for that matter. Some times it would go off to the left and other times the opposite way, it would also tow inline to over my head at other times. I did put this down to my building even though it had no warps in wings or tail. I did at the time think it was the lack of fin area even with the under fin and auto rudder, what I found out years latter was the tow hook and Centre of Gravity was to far back from the Leading Edge of the wing. This created a rearward pull behind the Centre of pressure of the wing. The plan shows the C of G to be at about 55% of the Cord while the tow hook pull position is at about 50%. This C of G position worked OK on the early open power models with flat bottom lifting tail sections yet had a hard time trying to get out of a stall if it got into one. The C of G for the Aiglet with this wing section would be 40% being a good starting point from the L,E, the tow hook pull position just slightly forward of the 40% C of G. Do not just think about the C of G being a position in % from the L, E, it is always a position related to the Centre of Pressure of a wing which is at the thickest cross section position. As a common rule the Centre of Gravity range is very close in front of and can sometimes be slightly behind this. Here is a very simple test of drag and forces, get a piece of plastic pipe say 50 mm in diameter and about 1500 mm long (5ft) for us lot, and then tie a piece of string about half way it’s length and then drag it over the ground in a straight line and see how far you go before it veers off to one side? Now tie the string one third back from the frond end and pull it, you will go a longer distance before you veer off to one side. Now put the string ¼ from the front end and do it again, you will go further. Drag and forces are now working in your favor the same way the C of G and the tow hook position on your tow tine glider. Do you get my drift; I hope not, that’s what started all this in the first place. Kind Regards All,
GaryButton - 23/08/2014
Add a comment