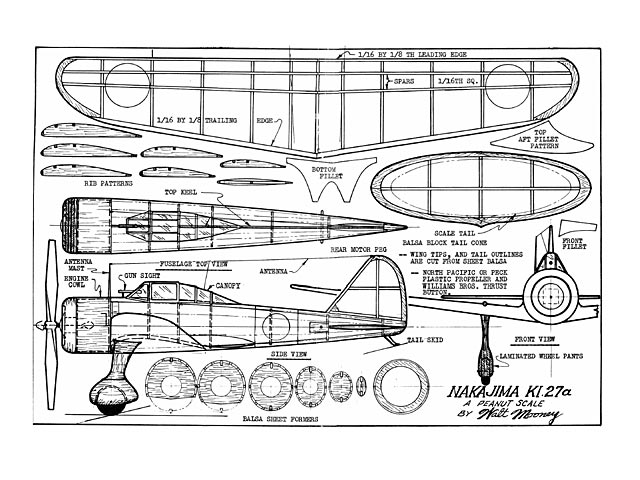 Do you have a yen to build a Japanese peanut? The star performer in the aviation portion of the Manchurian incident of the late 30's, this was about the best fighter of the time.

This little Japanese fighter was probably one of the very best in the world at the time it was first built in 1937. It was a classic low wing, fixed gear, light weight, highly maneuverable design. In addition, in service it was painted up in what would appear to be very pretty color schemes. A three-view for this airplane can be found in 'Fighters' volume three, by William Green, published by Hanover House. The Ki-27a is the model in the photographs.

As a choice for winning a Peanut contest using the present AMA rules, it is not the best, but for fun it will do fine and it is a pleasure to look at with the red trim, looking almost like a modern racer. The model was finished with white tissue and red (of course) insignia, cowl front, fuselage and wheel pant stripes, and tail decoration.

The real airplane had plenty of dihedral, but the horizontal tail is not very large, so this has been enlarged, as indicated on the plans, in the interest of more stable peanut flights.

Tail surfaces are built flat over the plans. When dry they are removed from the plan and the rib form pieces added to the top and bottom of the ribs. When these are dry the airfoil contour is sanded into the tail surfaces.

The tail surfaces can be built with the contour pieces omitted, if desired, for a small decrease in weight and a slight decrease in scale appearance.

Sandpaper is used to shape the leading and trailing edges of all surfaces. The leading edges are given a rounded contour, and the trailing edges are tapered to a more or less triangular section. Don't forget to add the little triangular gusset at the front of the vertical tail, or you will get a wrinkle in the tissue covering at this point.

The fuselage is built using the keel and bulkhead technique which is fairly common in kitted scale models, but which has not been used very often in peanut scale efforts. As a consequence, a detailed description of the method used for this model will be undertaken.

From the leading edge of the wing forward, the engine cowl is made as a separate assembly. Get some 'A' grain 1/32 sheet. Cut two rectangles to be used as the wraparound part of the cowl and edge glue them into a single sheet. Cut out two former rings and proceed to make a barrel-like assembly by wrapping the sheet around the rings. When this assembly is dry add the laminated sheet balsa front of the cowl. A Williams Bros. thrust button is used, and a dummy engine is built up inside the front face of the cowl around the thrust button.

Select the wood for the fuselage stringers carefully so they are all of about the same consistency. An extra stiff stringer or an extra limp one can result in an unwanted fuselage warp. Cut a top and bottom keel out of firm 1/16 sheet. These keel pieces should run from the front of the wing to the most aft bulkhead (After the fuselage is completely assembled, they will be cut away for wing clearance and the cockpit opening). Cut out all the fuselage bulk-heads. Note that they are notched only for the keels and then only for half the keel depth. The stringers will simply be cemented to the outer cir-cumference of the bulkheads.

This technique results in a smoother fuselage covering, because the bulkheads will not touch the tissue which will only be attached to the stringers.

Cement the bulkheads in place on the keels. Make sure they are correctly located and perpendicular to the keels in plan view. Now fit two opposite side stringers to the bulkheads. At this point you should check all the possible stringer positions..." 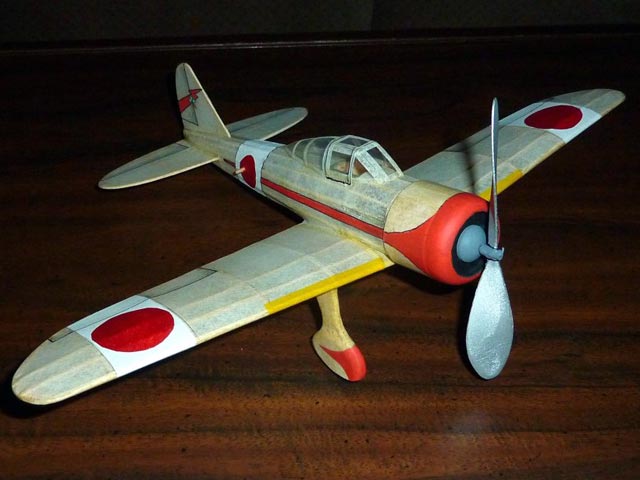