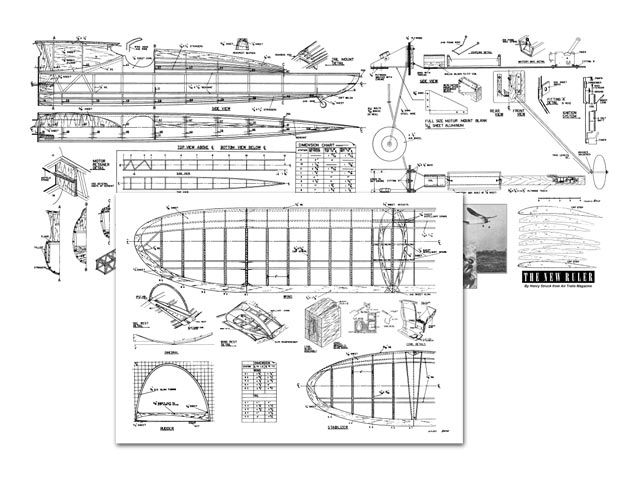 Quote: "The builder of the Record Hound (oz24) designs a high-performance ship especially for the 1940 rules. Has already set a new NAA record. Watch it! The New Ruler, by Henry Struck.

GAS model flying has taken another step forward! Under the official NAA contest rules for 1940 a ship 'must weigh at least 80 ounces for every cubic inch of motor(s) displacement.' The weight of the model is now controlled by the power loading rather than the wing loading. To design the best ship for these rules involves the consideration of numerous problems. Here's our solution - the New Ruler.

With the weight fixed by the displacement of the engine, the first requirement is the selection of the most powerful- otor per cubic inch of displacement. The majority of Class C engines range from .55 to .65 cubic inches, indicating keen competition between the manufacturers of these sizes, with the probability of superior products and further development.

After the powerful engine has given the ship maximum altitude, the duration depends on the ability of the model to soar. The sinking speed - the rate of descent in feet per second - rather than the gliding angle determines the ease with which a 'riser' will sustain the model. To obtain the lowest sinking speed the glide should be as flat and slow as possible without mushing or stalling. Cleanlining - simplified streamlining - an airfoil efficient at low angles of attack, and the maximum wing area allowed by the eight ounce per square foot wing-loading rule promise best results.

Aerodynamically, stability is most important. A model should climb evenly and in circles to avoid a dip when the engine cuts. During the glide the circle should be constant, without any tendency to waver or 'crab.' The model should not be critical to adjust, and any slight accidental change in setting should not bring on disaster.

A parasol wing will keep the nose up and magnify the desirable effect of a polydihedral wing. A large lift stabilizer will dampen the nosing-up tendency of the parasol before a dangerous stall results. The area of the rudder and the rear of the fuselage are vital to spiral stability. If the area is too small the ship will whip suddenly into a tight spin. If too large, the ship will tend to remain in whatever position it assumes, with the possibility of either a straight loop or a tightening spiral. From experience we have found the best position of the CLA (center of lateral area) to be about one fourth of the fuselage length behind the CG (center of gravity).

The construction of the ship should permit the various struc-tures to be easily lined up without sacrificing cleanlining. Every part should be quickly demountable for transportation and shock absorbing. The entire engine unit should be available for instant checking, including the important flight timer mounted in a handy position, for setting or release, when the model takes off.

All these ingredients have been incorporated into the New Ruler. The consistent performance of the ship has demonstrated them. Powered with a hot motor the climb is amazing, turning in an average duration in dead air of 2-1/2 to 3 minutes on a 20-second engine run. But its 'riser-haunting' glide minimizes the advantages of even great power, making the New Ruler a constant threat under any conditions.

FUSELAGE CONSTRUCTION: The fuselage is built up around an inner frame of 1/4 in square balsa to simplify alignment. Lay out the side view in full size. The longerons are 2-1/2 in apart and parallel. Determine the location of the uprights by consulting the dimension chart given on Plate I. Build both sides at the same time, one atop the other, to assure their being alike. Note that the dimensions are given from the inside of each longeron to the center line to aid in laying out accurate top and bottom views. Therefore the full length of each cross piece is twice the dimension given. Join the sides from Station 1 to 5. Pull the longerons together at the rear, install the stern post and set the frame on the top view. Fit the required cross pieces and complete the bottom in a similar manner. See Fig 1.

Trace the formers and bulkheads from the full-size patterns given on Plate II onto the stock specified. Lay the 1/8 in sheet pylon floor and cement the top formers in position. Insert the turtleback stringers of 1/16 x 1/4. Fill in between T 2 and T 3 with 1/16 sheet to form the box which is the backbone of the pylon. Add Formers 13 and 14..." 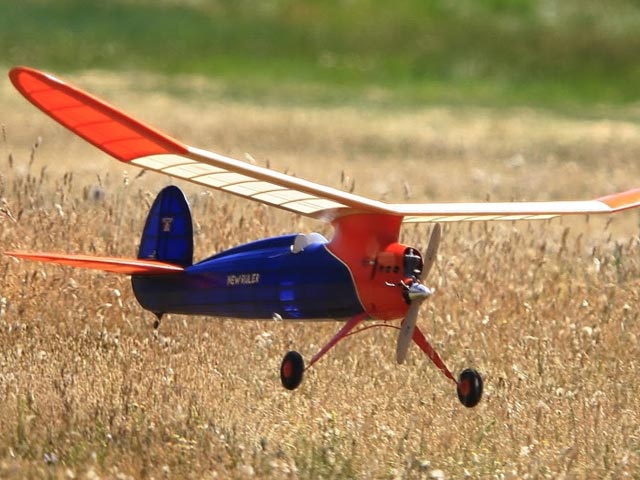 Here are four additional photographs of Henry Struck's New Ruler [more pics 003-006], found at www.rcmodelistas.es/foro/historia-aeromodelismo-f59
alcalaino - 16/11/2016
I have recently restored an old (very old) New Ruler for a mate to fly [more pics 007-012]. I love this design. Very whimsical with that impractical cockpit detail but really nice lines. We flew it this past weekend and it was delightful to fly. It meet its competition performance targets and handled really nicely.
AllanKnox - 23/06/2018
Add a comment