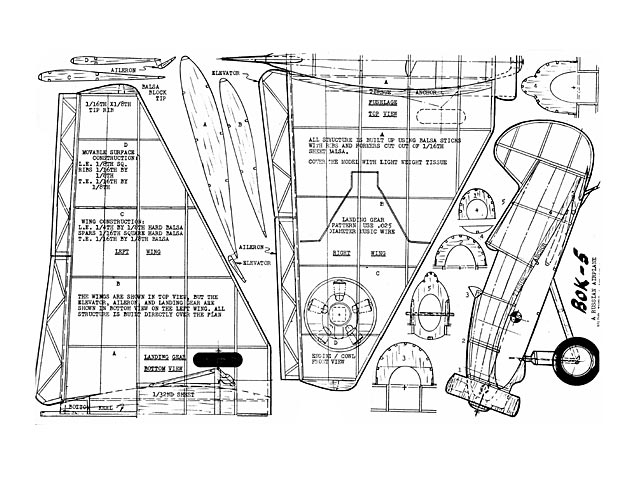 Quote: "By Walt Mooney. This scale model of a Soviet flying wing may not be the best flyer -Walt says it is tricky to trim - but it looks so neat you may be tempted to give it a go anyway. Just the thing for the upcoming Northrop Flying Wing Contest in November!

There is a nice three-view drawing and two photos of this Russian flying wing in Aircraft of the Soviet Union by Bill Guston. This was the inspiration for a Miami Peanut entry in the Northrop Flying wing contest. The model was not finished in time, and when it was finally ready for test flying it showed why there are not too many flying wings passing overhead in the skies.

It certainly did NOT fly directly off the drawing board. As originally tested it was nastily unstable. That is, it would start out looking like a good flight and then either pitch-up and stall, or start an outside loop immediately on launch. These characteristics were both present without any change in surface settings or power of thrust adjustments. Adding ballast to the nose to increase the stability gave it the untrimmable stability of a bomb. Two flight circles were eventually achieved with some aft ballast and some weight on the left wing-tip, but the flight looked like it was mostly stalled and falling off on a wingtip continuously.

Dick Baxter suggested that the gap between the wing and the movable surfaces looked pretty narrow and maybe should be increased. Sure enough, on close inspection it was discovered that the gap was half of what the true scale gap should have been. The model was taken home and the gap was doubled. Now the model flies reasonable well with no ballast, although once in a while it will do a strange pitch-down and pull-up maneuver during a flight. The suspicion is that the flow through the surface gaps is not necessarily continuous during a flight, resulting in large temporary pitch trim changes. If this characteristic is troublesome perhaps an even greater gap might be in order.

The model was a challenge in another way, how to arrange the plans so that both wings are shown and still get it on the two-page Peanut Format. It has a lot of wing area but it isn't a Fike beater. It has been fun inspite of all its challenges.

CONSTRUCTION: As might be expected from the configuration, building the model is somewhat different than usual. It is not difficult, just different.

Cut all the sheet parts out of fairly light-weight 1/16-inch sheet balsa. Make two of former 1 and laminate them together for the proper thickness. Cut out two of each rib A thru D, abd then cut two more of A..." 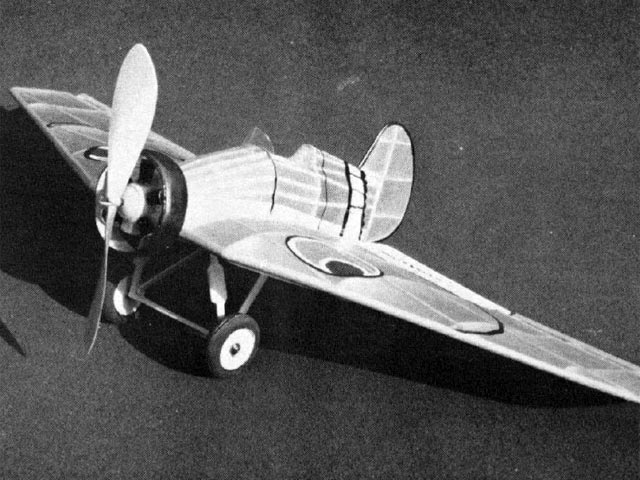