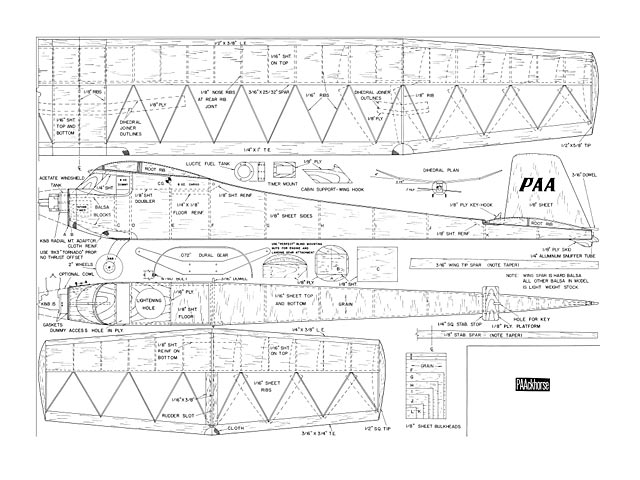 The PAAckhorse is a ship designed with attention to realism and yet sacrifices none of its performance in achieving semi-scale appearance.

The requirements for a good PAA-load job pretty much set the specifications for the designer. Not being able to go up like a skyrocket with a pound of payload, clean design and a really excellent glide are doubly important. A generous wing of 600 square inches area high aspect ratio, and an efficient turbulent-flow airfoil, help the PAAckhorse to use the altitude gained as efficiently as possible.

Perhaps second in importance to a PAA loader is a landing gear that will not distort under load and ruin a take-off attempt with a ground loop. The Cessna type gear of sheet dural has proved its merit in handling the weight of RC models and it does equally well at the similar job of getting a heavy PAA-load model 'unstuck.'

As in any contest ship, emphasis has been placed on simplicity and rapid building with perhaps more than the usual attention given to warp resistance. Once built, this one stays put.

The sidewinder engine mounting used is not necessary, of course, but it does minimize oil collection on the ship, and priming and battery attachment or compression adjustment are easier than in the upright position. Without load or with .19 to .23 engines the model is a potential winner in regular free flight events. The PAAckhorse differs little from standard practice in construction or flying and presents no problem in either one.

Let's build it. You will note on the plan that all balsa other than the wing spar is of light weight stock. This is necessary to keep the weight of any PAA job sown to a reasonable fignre. If you must use heavier wood, cut down on sheet thick-ness on the fuselage sides and leading edges of the wing and stab. Construction is simple enough that we'll men-tion only the few details that need special note. It's best to build the PAA dummy before the fuselage in order to use it as a guide in fitting bulkheads C and D.

Note that the wing leading edge is sharp and level with the bottom of the wing while the stabilizer leading edge is rounded in the usual manner with its entry point 1/8 in above the lower surface. I prefer to use silk covering for its strength. However, Jap tissue and four coats of clear dope is adequate due to the model's structural rigidity and is an ounce or so lighter than silk..." 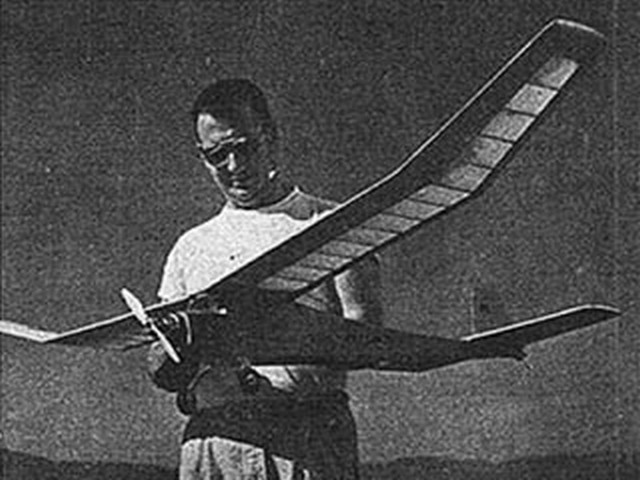