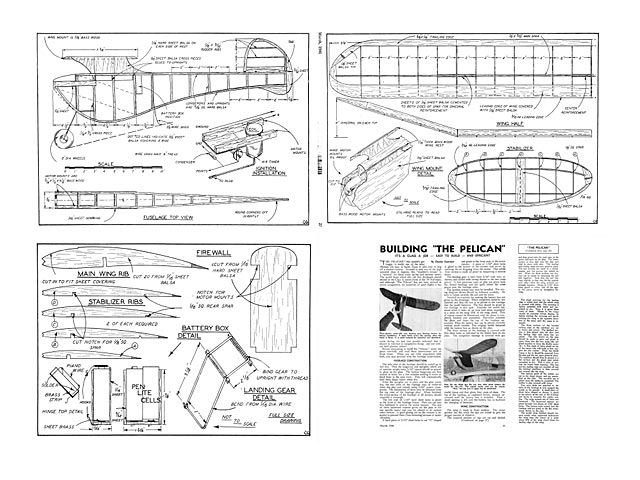 Quote: "The Pelican, this month's gas buggy, is really one of the efficient, yet easy to build, Class A jobs ever to hop off a contest runway. Stressed to take any of the high powered class A engines, this 'modeler's dream' is a natural for those many spring and summer meets. The model from which this job is developed placed second in the Class A senior event at the '39 Nationals, and although the Pelican has not been entered in active competition, the hundreds of sport flights it has made during the last few months indicated that it should be watched in competitive flying - and not without field glasses, either!

Before attempting to build the Pelican, study the plans carefully and read these instructions two or three times. When you are fully acquainted with both, you may proceed with the fuselage construction.

FUSELAGE CONSTRUCTION: The side view of the fuselage should be scaled up to full size. Then the longerons and uprights, which are of medium weight balsa 3/16" square should be pinned inplace on the plan. The bottom longeruns are first soaked in water for a few minutes making it easier to bend them to the plan form. They will automatically hold their shape better when dry.

After the uprights are in place and the glue joints dry, the two sides of the fuselage may he removed from the plan and joined, using 3/16" square cross-pieces. The dimensions of these may be obtained from the top view of the fuselage plan. When finished, the cross-section of the fuselage at all stations should resemble a rectangle.

The fire wall of 1/16 hard sheet balsa is glued to the front of the fuselage frame. Slots are cut into this bulkhead to receive the motor mounts, The size of these basswood mounts given on the plan is for one specific motor and may be altered to fit various other motors. A good gluing job on the mounts is essential to prevent them from loosening because of motor vibration.

The landing gear is bent from 1/16 steel wire, as shown, and lashed with strong thread to the two cross pieces. A few generous coats of glue are given both the thread bindings and the spots where the cross pieces join the fuselage sides.

The ignition system may now be installed. The wiring diagram shown should be followed carefully. Be sure to fasten securely the coil and the timer.

The front section of the fuselage is covered with thin sheet balsa as indicated by the dotted lines on the plan. The completed fuselage is covered with gas model tissue and then given four coats of dope. The top of the fuselage, as explained before, remains uncovered until the battery box is installed. Then a small opening is left over the battery box to facilitate the changing of batteries.

WING CONSTRUCTION The wing is made in three sections. The center portion lies flat while the tips are raised to give the proper amount of dihedral. The required number of ribs are cut and slotted, and then glued onto the main spar at the points indicated on the plan..."

Alternate version, scaled up to fullsize, thanks to tri-pacer. 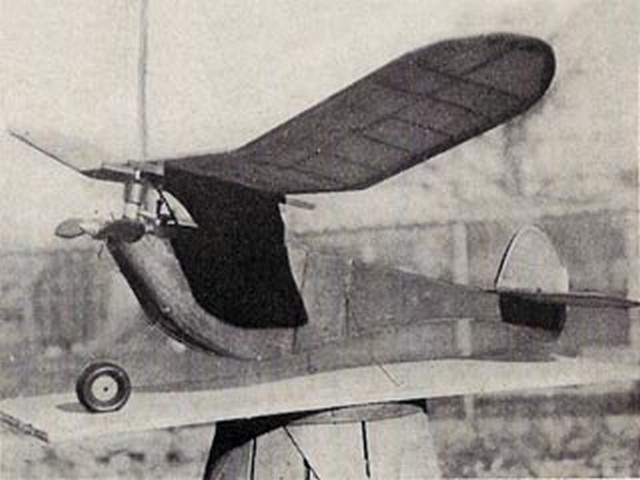 Hi Steve, Have a look at the Pelican plan and photo. I think this model should be 40in span and not 55in. Count the centre ribs of the wing using the photo. I may be wrong ?
Terry - 22/02/2014
Thanks Terry, I think you're right. Let's call it 40in wingpan - until we hear a better argument.
SteveWMD - 22/02/2014
To understand this plan is fine, compare it with several of the web. You cannot base a shot on a photo.
Néstor Hugo Fiorini - 27/08/2019
Yes, but the plan is badly (misleadingly) drawn. It does not have a centre-line on the middle of the wing. So it is unclear that the wing has only 3 panels. That is why the photo is useful. To help understand. See my sketch with red corrections [morepics 004].
SteveWMD - 27/08/2019
The plan is original and can be built like this, respecting that. Won't it be badly built? What is wrong with the photo model? It could have taken away the size of the wind.
Néstor Hugo Fiorini - 28/08/2019
Steve, the plan lacking a centre-line is as you rightly say misleadingly drawn. At those times there was a lot of misinformation flying around, so to speak, see for instance the B-29 fin in Bill Wylams Scale Aircraft Drawings vol. II in the RCLibrary, #RCL1390. The only things right in that drawing was that the B-29 had wings and four engines (of wrong shape at that). This was purposely done to to lead the enemy astray. In the case of the Pelican drawing dare I suggest it would be the same thing, no CL (no CG either, mind you) so whatever Hitlerjunger got hold of this plan by devious means would remain in doubt as to the true span of this fat-belly hippo of a model due to the plan ambiguities. The plan being American, I see the FBI's J.Edgar Hoover hand here.
Miguel Morao - 28/08/2019
The CofG is stated in the article as 35% wing chord. The depth of the fuselage is probably to comply with competition rules
pmw - 28/08/2019
Thank you for your clarifications, pmw, I hadn't noticed the CG location, and of course the Guppy Look was common in designs of the time, possibly rule mandated as you suggest.
Miguel Morao - 29/08/2019
Add a comment