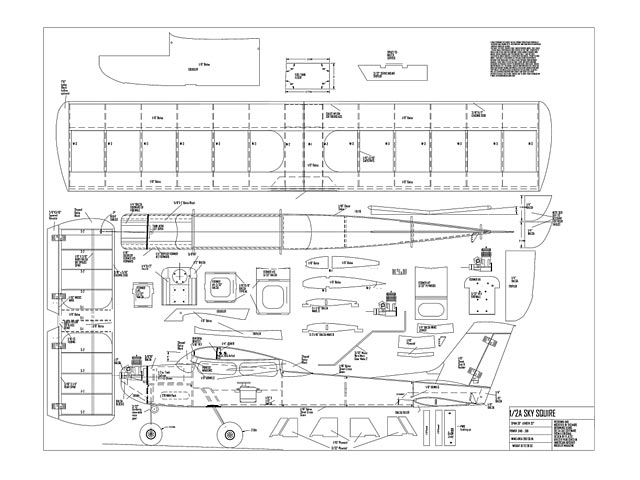 Quote from Richard Browning: "The 1/2A version 39in span and a 48in span Junior Sky Squire (oz5322) version were both published in American Aircraft Modeler June 1969 issue. The original 57 in Sky Squire (oz10563) was first published in the March-April 1966 Grid Leaks Magazine ...The late R. Jess Krieser designed all three versions the 57 in was kitted by Midwest Models. Mr Krieser also designed many of the early Carl Goldberg kits (Falcon, Skylark, and Skylane). The plane was ahead of its time very attractive easy to build and I don’t think and modern sport trainer has anything on it. My first successful R/C model after a few failures using single channel escapement equipment was the 1/2A Sky Squire with a World Engines Digit Midget single channel ($69.00) for rudder only and a TD 0.51 it flew great ...I hope we start to see more of these aircraft at the field they are truly a great design"

This is a modern CAD-redrawn plan. CAD by Richard Browning.

Note this drawing seems to be a reduced scale version of the 57 inch Sky Squire (oz10563), in the sense that it was reduced by Richard Browning and not by Jess Kreiser. There are some differences. The only airfoil shown on this plan is semi-symmetrical.

For the original print of this plan (which shows parts to build either a flat-bottomed or semi-symmetrical wing), see 1/2A Sky Squire (oz12020) from AM, June 1969.