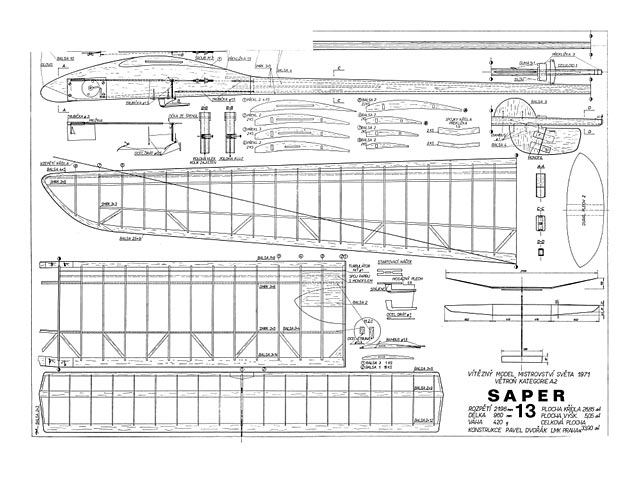 Quote: "Saper 13. You have in your hands the construction kit of the winning glider of A/2 category at the World Championship 1971 in Sweden, which was constructed by Mr Pavel Dvorak. This model is the newest type of his series of gliders of A/2 category. With his previous model SAPER 12, he won the Championship of Czechoslovakia 1970 as well as other three great contests in 1970.

In the upper part of the building plan is separately drawn the original adjustment of the starting hook and the accessories of towing of the model. As there is not possible to print the building plan in one piece, you have to put it together from two halves along the marked line.

The model SAPER 13 is adjusted for modern construction kit and is excellent for current contest flying - as demonstrated on the plan.

Wing: Select the faultles pinewood spars 3 x 8 [1] and 3 x 5 [2] which are needed for the main spar. Sand them smooth with sand paper and on their narrower side [3 mm] make a furrow for the steel string (view P). Anchor the steel string 0,3 mm on one and of the spar by bending it over its edge (or binding it with soft wire), stretch it along the spar and anchor it in the same way on the other end. Press it into the furrow in the spar and cement it with epoxide. Secure it with clothes pegs till the epoxide dries out thoroughly.

The string is cemented only into the middle parts of the wing - not into the ears. The spars for the end parts of the wing (ears) are to be bevelled from dia-metre 3 x 8 mm to 3 x 5 mm and from diametre 3 x 5 mm to 3 x 3 mm at the end. When the epoxide dries out, give the whole surface of the spars two coats of thin acetate varnish and sand smooth again when dry.

Cut out the ribs for the centre of the wing (4), (5) and (6) from plywood panel A (thickness 2 mm) which sand smooth between templates into exact pro-file. Make into the notches for spars and tongue. Make 60 pieces of rectangles 20 x 145 mm [from balsawood panels 2 mm ZK] - you will need them for ribs of the wing. For the centre part of the wing you will need 24 pieces of ribs (7) which make in one block between two tin templates. Cut them out and sand smooth into the final shape including the holes for spars. The ribs of the ears are to be made separately for each half of the wing - always 17 pieces. Place these 17 pieces between the template for the centre of wing and the template for the and of wing. To get the proper shape of the ear's ribs place the front edge of the smaller template about 15 mm behind the large template. Keep in mind that you have to make the ribs for each half of the wing separately!

Cut out the three end ribs (9), (9) and (10) of balsa-wood panel B, thickness 2 mm. Cut out four pieces of the leading edge (11) of balsawood panel NK (thickness 10 mm). You will need two pieces for the centre of the wing and two pieces for wing ears. Give the leading edge the desired radius and file into it the notches for ribs. The trailing edge (12) will consist also of four parts - cut them out of balsawood panel OK (thickness 4 mm). Again, two pieces will be used for the centre of the wing and two pieces for the ears. You can bevel them into desired profile according to plan and file into them notches for ribs. Pull the ribs on the main spars of the centre part of the wing (without the rib in the place of bending). Adjust them in proper places, cement them thoroughly and attach to them the leading and trailing edge..."

Alternate version of the Saper plan (2 pages) at 400 dpi, thanks to ErikP.
Instructions, 2 pages, in English. 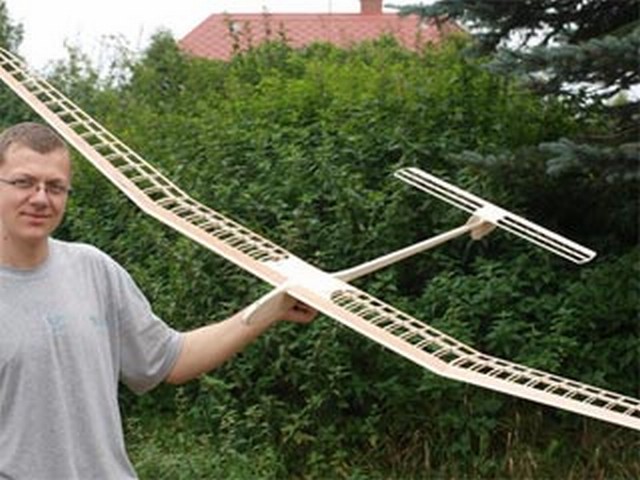