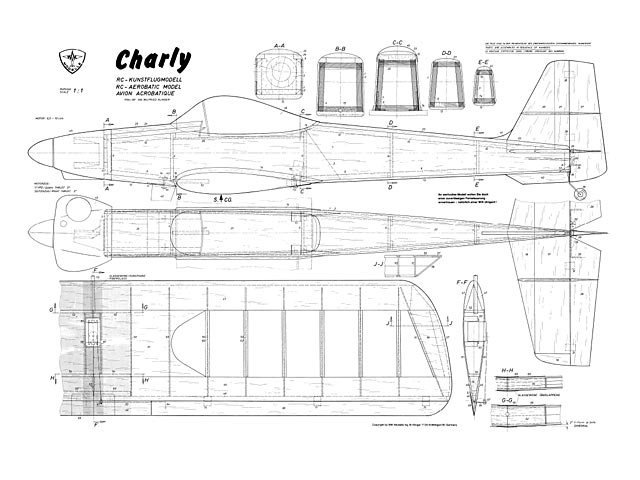 Quote: "Review: The Wik Charly. RC Model World, September 1985. A sports model for .40 to .60 engines, the Charly is reviewed by Peter Miller.

The Wik Charly is one of the prettiest looking kits available today, the big bubble canopy and applecheek cowling gives it a very realistic appearance, so much so that it would not be surprising if it was mistaken for a scale model by the less knowledgeable. Despite its very sleek lines the Charly must be one of the easiest models to build using conventional construction. The wing takes little longer than a foam wing while the fuselage goes together in double quick time.

The kit: The box is fairly large and upon first opening it one sees a deceptively small bundle of wood, a large bubble canopy, a large red plastic cowl and a very substantial Dural undercarriage.

There is a very clear plan which could be used to build the model from and a set of instructions in German with photos. There is also an excellent English translation which has a list of all the parts detailed.

The wood is top quality and obviously selected for the job in hand. Every single piece of wood is numbered and the num-bers match the sequence of building, only two pieces of wood were mis-numbered and as the shape showed where these fitted that was not important. Even the short strips used to build up the formers were numbered.

Fibreglass bandage is supplied for joining the wing and cowl halves. No tank, engine mount, wheels or clevis rods are provided although hinges are. Bolts and anchor nuts for the engine mount are in-cluded and four small self-tapping screws for the horns but none for the cowl although these are called for in the instructions.

Fuselage and cowl: The fuselage is basically a tapered box. The sides are laminated to the doublers and the front former is laminated from two 1/eth ply formers. The rest of the formers are built up over the plan from 1/2 x 3A6ths strip with a taper towards the top of the fuselage which increases the further aft the former is situated.

The sides are joined to the front former and it is important to note that the plan view taper starts at the front former so do not glue it to one side at right angles. Once the basic sides and formers are assembled the triangular longerons are fitted between the formers, on the bottom these end at the last formers. There was enough stock to continue them to the tail post and I would reckon this as one you can sand through too easily while rounding off the fuselage.

The fit of all the parts was excellent and the fuselage was very quick to build.

The cowl has to be cut from the one piece moulding, it is moulded rear end to rear end, once this has been done it is sanded flat on the mating surfaces and glued, I used Cyano as I was using this for the complete model. When the Cyano has set the 1/2 in wide glass tape is epoxied over the inside of the join line and the cowl is ready for cutting out the various access holes, inlets and so on. Mounting the cowl is done with self tapping screws, no hard points are provided for these but I drilled 5/16 diameter holes and glued in short lengths of dowel to take the screws.

There are two wing fairing strips which have to be glued to the outside of the fuselage, these mainly provide a wider seat for the wing and I was tempted to glue them inside to make covering easier but decided to follow the plan, in the end they did not cause any problems with covering and do look neat..." 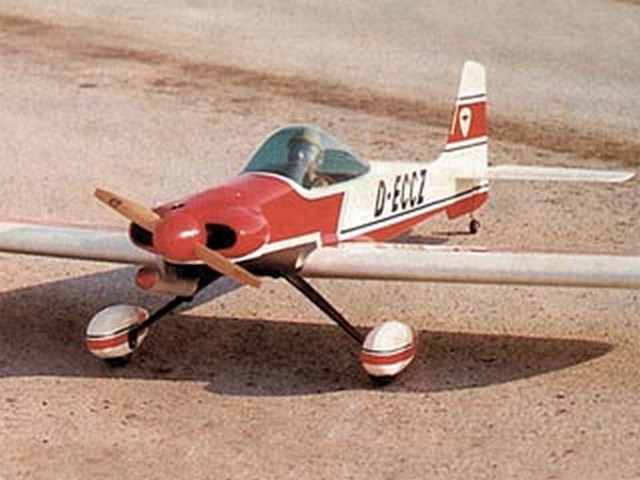