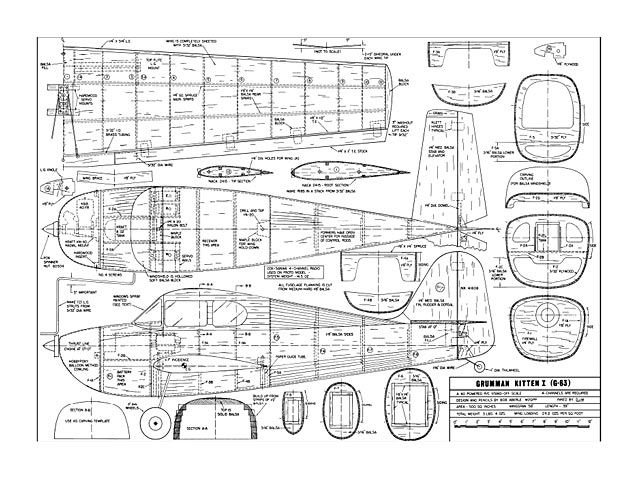 Quote: "Here's one of the lesser known members of Grumman's family of flying felines, in a .40 powered R/C version. The Grumman G-63 Kitten I, by Bob Aberle.

The most interesting R/C scale projects are the ones involving little known, and consequently rare, aireraft. As a Grumman Aerospace engineer for many years I probably have access to a great many files, drawings and photographs that wouldn't ordinarily be available to the general modeling fraternity, About four years ago I found a single 11 x 17 in chart depicting the various Grumman planes produced since the company's beginning, back in the early 30's. On that chart I noticed several small photos of a commercial lightplane series which was apparently attempted by Grumman towards the close of World War II. One of these planes caught my eye !simply by the name 'Kitten.' Grumman aircraft followers no doubt are well acquainted with the famous 'Cat' series beginning with the Wildcat, Hellcat, Bearcat and ending with the current F-14 Tomcat. So why not a Kitten?

My search started with Grumman's Historian, Mr Andy Hubbard. Andy, having been with Grumman for many years. was able to produce almost immediately a large assortment of photographs on the Kitten I and several related aircraft. With that as a start, Iwas able to obtain a general arrangement drawing (probably the only remaining drawing) of the Kitten I from Mrs Lauretta Kinscherf, who is in charge of the Grumman Out of Production Aircraft File Room.

During the later part of 1942, it was decided that Grumman would divert a small amount of its design effort towards the production of a commercial lightplane. With peace time in sight, it seemed that a large market would develop as a result of returning military pilots. Mr LeRoy Grumman's personal assistant, Franklin T Kurt and Dayton Brown were put in charge of this effort. The resulting plane, the Kitten I evolved into a two place aircraft of 32 feet span, powered by a Lycoming 0-290-A engine of 125 hp. Empty weight was 1145 pounds and the weight fully loaded was 1900 pounds. Overall length was approximately 19-1/2 feet. The plane itself was unique due to a new spot welding process which was used throughout the construction. Control surfaces were built up and covered with fabric. Propeller was a two blade wood type measuring 6 ft 1 in diameter. A manually retractable landing gear was employed. The Kitten I was definitely a tail dragger, although that was changed later on.

About the Model. With only a single arrangement (three-view) drawing and no further details available the only possibility was a Stand-Off Scale project. I didn't even have a single cross-section view of the fuselage, so a great deal of the fuselage contouring was my own imagination based on the original photographs. The resulting model is still rather cute.

Since .40 power is getting quite popular I decided to try this class and settled on a wing area of 500 sq in. Although all printed specifications for both Kittens indicate a 32 feet wingspan, the Kitten I drawing (No. 50,001) shows an actual dimension of 28 feet, tip to tip. Since this 'looked' better I decided to use the 28 foot dimension as the basis for my model of the Kitten I.

The actual scale factor selected was 2.05 inch equals one foot on the fun size aircraft. Modern digital calculators make scaling very easy these days, regardless of the odd scale factors selected. The model worked out to approximately a 58 inch wingspan. Wing aspect ratio is 6.6 and the original dihedral of 5 degrees was used on the model as well..."

Hi Steve - Here is Bob Aberle's Grumman G-63 Kitten from Flying Models magazine issue 02-77. This model was featured on the cover of this issue as shown. 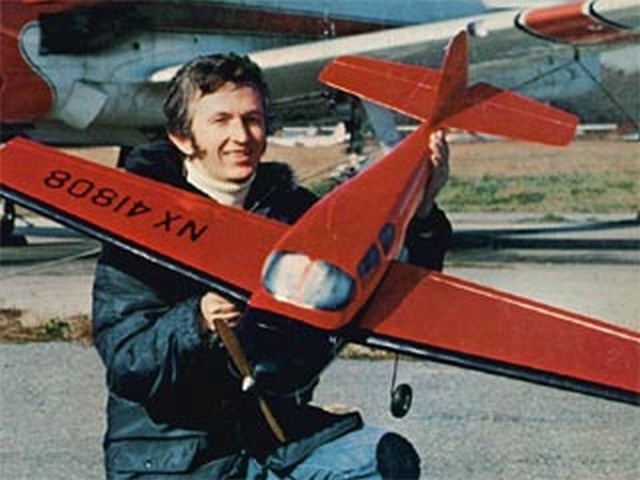