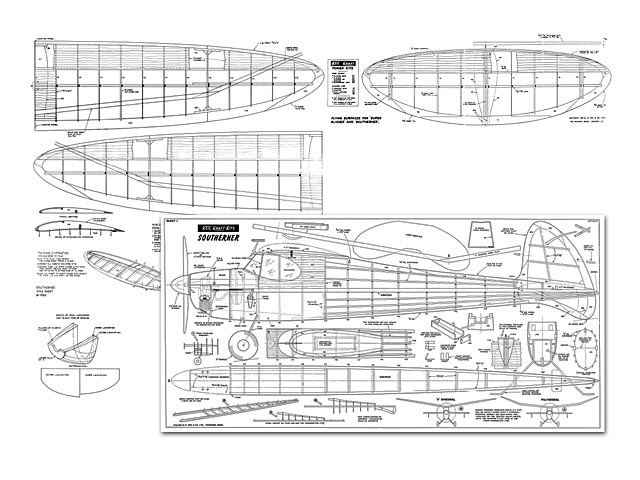 Quote: "BUILDING INSTRUCTIONS: The Southerner design was first drawn up in early 1947 and a prototype K.6 powered model completed. At this time there were practically no good British engines of the capacity required so plans for kitting this model were reluctantly shelved until 1949. With several suitable British powerplanis now in production, a Mk.II version has been designed - this kit being the result. The plans have been prepared to suit the Mills 2.4 diesel, but modifications for many other similar size powerplants are provided on the special engine installation sheet.

This 60 in cabin model has been well tested under all types of weather conditions and is suitable for both contest and sport flying. The standard polyhedral wing is recommended for powerful motors of the McCoy 29 or Yulon type. Mills 2.4 or ED 2.49 diesels may be safely used in conjunction with 'V' dihedral. Incidentally, the flying surfaces of this model are similar to those of the Super Slicker.

Building this kit will take even the experienced modeller a considerable time, but no snags should arise if you follow the notes and the plans carefully. The only tools needed are razor blades, a fretsaw, a pair of long-nosed pliers and a packet of steel pins. Bend the undercarriage wire to shape in a vice. The plans may be protected by placing sheets of greaseproof paper over them. Join Sheets 1 and 2 to give the complete wing plan.

ENGINE INSTALLATION: Cut-outs for the bearers in formers F1 - F7 have been positioned to suit the Mills 2.4 and these must therefore be altered if another powerplant is to be installed. The thrust line and airscrew position should on no account vary from that shown on the plan.

If you intend fitting a spark engine, follow the wiring up details on the Separate sheet_.The batteries are carried under the CG and access to them is obtained by removing the wing.

FUSELAGE: The fuselage is built up on the crutch system to ensure an accurate and tough assembly. Join the F2 - F7 former halves flat on the building board. The angled cut-outs in the tops of F5 - F8 are drawn for the standard polyhedral wing version. If 'V' dihedral is to be featured, cut out the sharper angles indicated by the dotted lines.

Begin the assembly by marking the F1 - F7 former positions on the engine bearers, and cement F5 - F7 in place. Cut out U1 - U3 and F4 with a fretsaw. Bend the undercarriage to shape, position on F4 and glue the U1 and U2 pieces in place. When dry, sandwich the U/C between F4 and U3, screwing the whole together.

Note this model shows identical wing and tail surface construction to the KK Super Slicker (oz1401) plan and a comparison between the 2 plans to check for details or errors may be useful.

Quote: "This plan was kindly supplied to me through the generous and free help of the David Baker Heritage Vintage Library [DBHL] people at http://www.sam1066.org/library who I cannot praise highly enough."

Update 22/07/2019: Added a copy of the kit instructions along with full printwood scans (12 pages), thanks to RonJames. 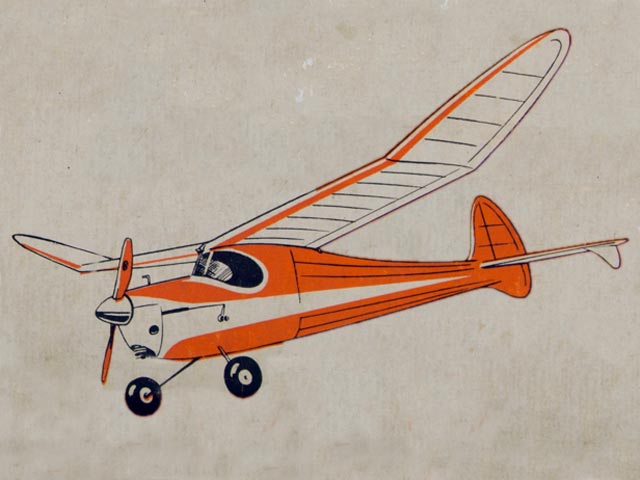 Hi, I'm hoping to send you the ribs, formers and instructions for the KK Southerner. I recently got this kit on ebay and it is complete. However for some reason my computer won't allow me to send these details so I have arranged with a much more computer literate friend to see if he can copy the parts and send them to you...
Ron James - 13/07/2019
Excellent, thanks Ron that's great. Looking forward to adding them to the archive.
SteveWMD - 13/07/2019
Wonderful! Many thanks to Ron and all at Outerzone for this long awaited addition to the Southerner file.
Ian M - 23/07/2019
Wow!!! Great celebrations for the Southerner printwood files. Many thanks to RonJames (and of course Steve and Mary). Hopefully this strengthens the case for Southerner as model of the meet for the 2020 Cowra Oily Hand Days. How elegant would a collection of 30 or so look? Regards,
Warren Brown - 23/07/2019
Add a comment