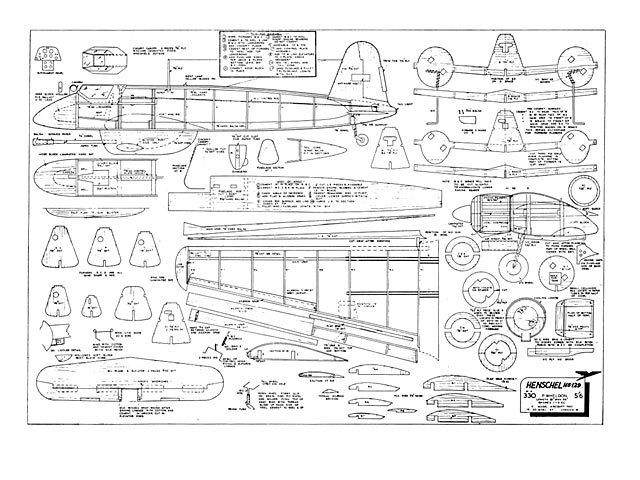 Quote: "I CHOSE the Henschel Hs 129B-2/R4 as a companion model to my Ta 154 Moskito (oz912) published in the December 1959 Model Aircraft, as being a typical example of German design. It is not a 'pretty' aircraft but does make a most attractive model.

The Hs 129, powered by two 690 hp Gnome-Rhone engines, entered operational service in 1942 and was the Luftwaffe equivalent of the Russian Schturmovic. As a result of space limitations in the cockpit, certain flight instruments were positioned on the inboard sides of the engine cowlings. The entire fuselage nose section - including the pilot's canopy - was built up from armour plate. Although the original armament consisted of two heavy cannon and two machine guns this was steadily increased until the 2/R4 staggered into the air carrying a 75 mm anti-tank gun! This was no mean achievement when the limited power available is considered. Considerable success was achieved with this armament but with the advent of rocket carrying aircraft in 1944 the era of the Hs 129 -the 'Flying Can-opener' - ended.

Construction of the Model. The construction is similar to that of the Moskito and is split into three stages: (1) the fuselage and tail unit (2) the wings, and (3) the engine nacelles, all being linked together by the two master formers B and C. Provided these two formers are carefully constructed and lined up on the fuselage keel, alignment of the model is automatic. Being a scale model, a little patience is needed, but as the photograph shows, the effort is well worth while.

Fuselage. Commence construction by carefully cutting out all parts for formers B and C including the hard 1/8 in sheet main-spars..." 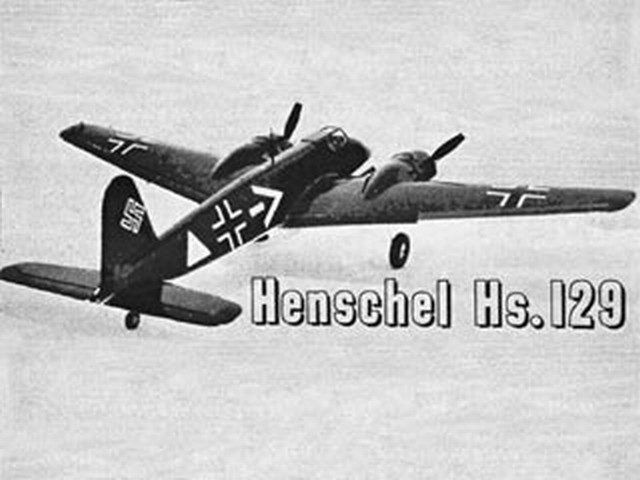