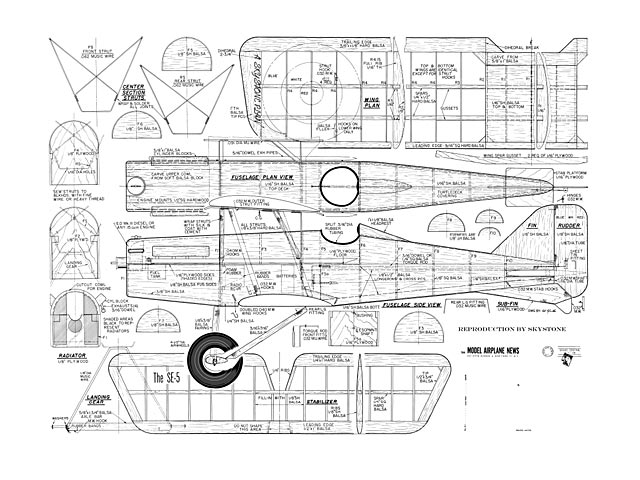 Quote: "Flown with notable success both as a free flight and radio controlled job, this man-sized scale model of famous- SE-5 fighter is unforgettable. The SE-5, by Chet Lanzo.

This model is true scale with but two deviations from the full size plane: larger than scale wheels are used and stab area has been increased. The air wheels have proved to be well worth the slight loss in scale appearance because of the amount of shock and beating the landing gear takes. The elevator area has been increased slightly to 20 per cent of the wing area to improve flight stability.

Rugged construction is very important in a radio control job and the general beefing, up of this model with plywood and wire has paid off after a number of hard landings. The SE-5 has flown into trees of the thorn apple variety without any apparent damage. Adding ro the crash resisting ability of the plane are the knock-off upper and lower wing panels, stab and wing struts. On a few occasions previous to the installation of the radio control gear, the model was flown free flight with very satisfactory results. The biplane configuration with the upper wing set at plus 2 to 3° and the lower wing as zero° incidence makes a very stable arrangememt.

The upper wing goes into a stall sooner than the lower wing at high angles of attack, and with the coupling fabout the CG produces a restoring moment withour the usual loss in altitude accompanying a normanl stall.

Experience wirh the ED 2.46 cc diesel shows it makes a reliable, easy-starting power plant which I recommend highly, although almost any .15 glow plug engine will produce more than adequate power for this ship.

Some difficulty was experienced with the single hard tube receiver installations because of the large amount of wire used in the bird cage type of wing mount. Upon grounding of the wire to the B Minus side of the receiver, this difficulty disappeared. Warping up the trailing edges (washout) of all four of the wing tips to about 1/2 in produces a model with improved stability in turns under power and in glide.

Top and botrorn wing panels are built flat over plans, dihedral being added later. Upper and lower wings are identical except the lower wing has the interplane strut hooks on the upper surface. Pin down pre-shaped leading and trail-ing edges, then add ribs. Next, wing tips and center section blocks..."

Article pages text and pics, thanks to Pit. 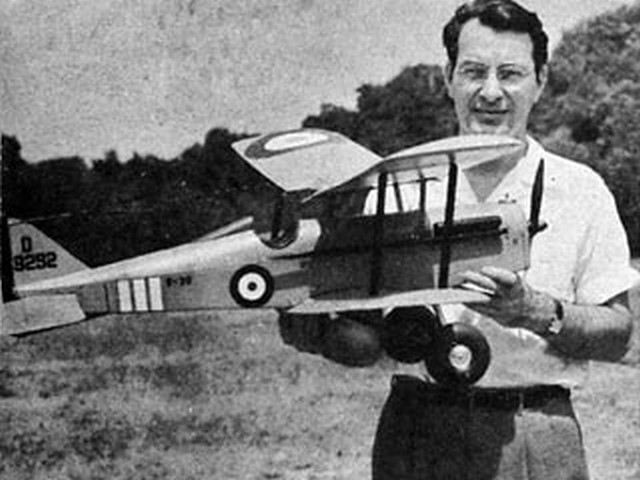