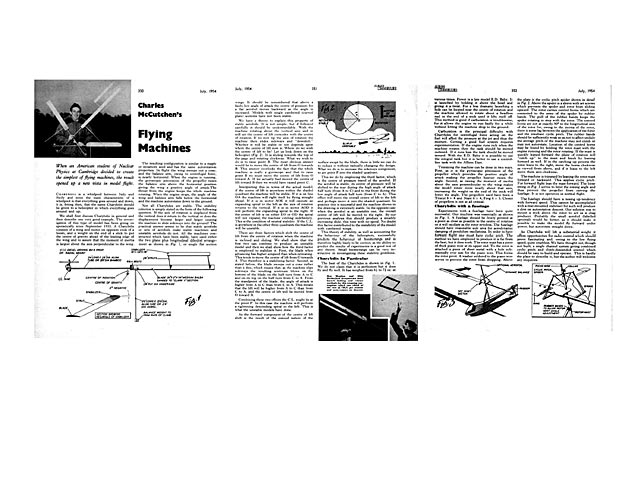 Quote: "When an American student of Nuclear Physics at Cambridge decided to create the simplest of flying machines, the result opened up a new vista in model flight. Charles McCutchen's Flying Machines.

We shall first discuss Charybdis in general and then describe one very good example. The investigation of this type of model has been going on sporadically since September 1953. A Charybdis consists of a wing and motor on opposite ends of a boom, and a weight on the end of stick to put the centre of gravity ahead of the leading edge of the wing and to assure that the moment of inertia is largest about the axis perpendicular to the wing.

The resulting configuration is similar to a maple or sycamore seed and has the same autorotstion properties. In flight the wing sweeps out a cone, and the balance arm, owing to centrifugal force, is nearly horizontal. When the engine is running, the gyroscopic precession of the propeller raises the balance arm above the horizontal position giving the wing a positive angle of attack.The thrust from the engine keeps the whole machine rotating. When the engine stops, the angle of the wing and balance arm falls below the horizontal and the machine autoroutes down to the ground.

Not all Charybdes are stable. The stability criterion is simply stated in the form of the following question. If the axis of rotation is displaced from the vertical does it return to the vertical or does the displacement become larger and larger causing the machine to slide sideways into the ground? The Practical answer seems to be that stable aerofoils or sets of aerofoils make stable machines and unstable aerofoil do not. All the machines constructed which have been stable, have used either the two plane plus longitudinal dihedral arrangement as shown in Fig.1, or single flat section wings.

It should be remembered that above a fairly low angle of attack the centre of pressure for a flat aerofoil moves backward as the angle is increased. Models with single cambered (curved plate) sections have not been stable.

We have a theory to explain this property of stable aerofoils. It is not simple, but if followed carefully it should be understandable. With the machine rotating about the vertical axis and in still air the centre of lift coincides with with the centre of rotation. If we now tip the axis of rotation..."

Quote: "Hi Steve, You've just published Ken Willard's Rotoriser (oz5264), and there is another similar Charybdis (oz3541) also on the site. Having these copies, it seems a shame not to have the original design, Charles McCutcheon's Charybdis, published in the AM of July 1954. Last year, I was amazed to discover that some Australians actually thought that Ken Willard's model was 'the original'..."

Note this is not a full scale plan, it is a scan of the article with 3 text pages including a general layout drawing. 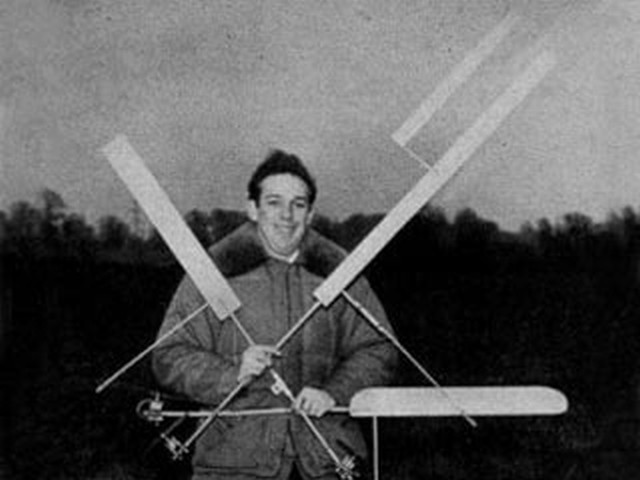 I built one of these 4 years ago. With an electric motor. Throttle control only. It flew just like it was supposed to! Very cool!
DW - 26/01/2014
Add a comment