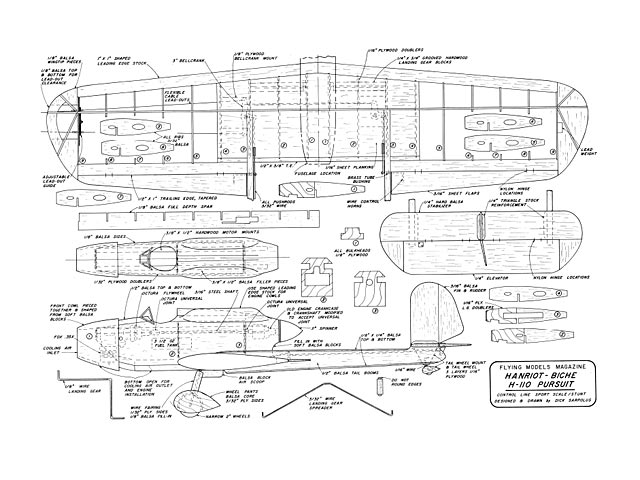 It's a Henry 0. what? How come the needle valve is up there and the prop is back here? - These are some of the comments heard at the field concerning this model, and of the more unusual projects I have had the pleasure of developing. Most scale fans are always looking for that 'different' ship to model, and when I saw pictures and 3-views of this one in an old July 1934 issue of Universal Model Airplane News it looked like an interesting challenge. One thing to be sure, it is not something you will see at every flying field.

In 1934 this was the latest state-of-the-art; a monoplane that could fly over 240 mph! At that time, data on its performance and top speed had been kept secret by the French government. It was powered by a geared and supercharged 600 hp Hispano-Suiza engine, water cooled with the radiator mounted in the nose, enclosed in an NACA cowling. The gas tanks were located in the center-section of the wing, and in case of an emergency could be dropped free of the plane. I would think dropping the gas tanks would just place the pilot in another sort of emergency.

It had a three bladed, adjustable pitch prop. Twin machine guns fired through the bottom of the cowl. Flight controls were push-pull rods, passing to the tail through the tail booms on ball bearings. It was planned to have the landing gear retractable on subsequent versions. Apparently the Pursuit was not too successful; at least I have never heard of the aircraft, except in this magazine. The issue did contain a three-view drawing, a photo of the aircraft, and the full color cover painting depicted it in action.

Three years passed before I began work on the plans for the model, then another year before construction was started. Once begun, the model was completed in three months. It must be classed Stand-Off Scale, as I wanted it sized and proportioned for hopefully aerobatic capabilities. Coupled flaps and elevator called for the double bellcrank arrangement due to the center-section notch in the wing. The extra linkage required is another bellcrank, it's mounting provisions, pushrods, and another flap control horn. An adjustable lead-out guide was built in to aid in trimming the ship.

The plans were first laid out calling for the engine to be located over the wing trailing edge - it was obvious that this approach would require much ballast weight in the nose for correct balance, so the extension shaft idea was explored. Standard boat hardware; flywheel, universal joints, shafting, could be used, but the big problem was the rear bearing support and prop drive arrangement. To keep it simple, an old engine was sacrificed - the cylinder, piston, etc were discarded and the crank-case casting cut off above the case itself. The crankshaft was modified to accept a universal joint by welding a stub shaft into the back end and turning off the counterbalance and connecting rod pin. This provides a standard prop drive arrangement and mounting lugs for easy installation. The best solution would be to use sealed, grease lubricated bearings on the shaft. Depending on your machining capability many methods could be used for fabrication of this extension shaft assembly.

Construction is basic; built-up wing with full depth notched spar, sheet balsa tail booms, sheet tail surfaces. The fuselage is built up with 1/32 in plywood doublers and has long 3/8 x 1/2 in maple motor mounts which take both the engine and the rear bearing support; this simplifies alignment. The fuselage does require quite a bit of carving; the rear end fairs into the spinner, engine cowlings and headrest on the top, and the front cowling all must be built on and shaped. Details as the wheelpants, landing gear fairings, fuselage air scoops, all add to the finished appearance.

The Extension Shaft. Engine starting is accomplished with an electric starter and small V-belt over the engine flywheel, as is done on many R/C helicopters. The original model turned out quite heavy; I haven't weighed it as I really don't want to know just how heavy it is. The extension shaft hardware naturally adds weight, and at the time construction was underway, I just couldn't find any lightweight balsa for that fuselage. The weight of course hurts the aerobatic capability, but it does fly quite well. If you keep the weight down it would be even better.

An old model Fox .35X was used with a Tornado 10x6 pusher prop; it does a good job. Don't keep the plane on the ground very long after the engine has been started, as it must be moving to get air flowing over it for cooling..." 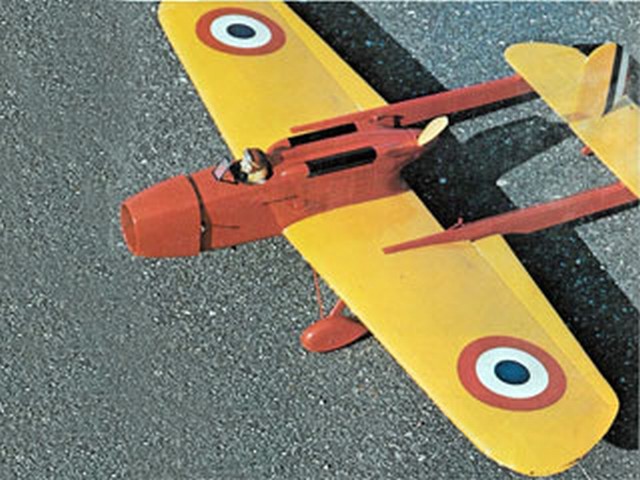