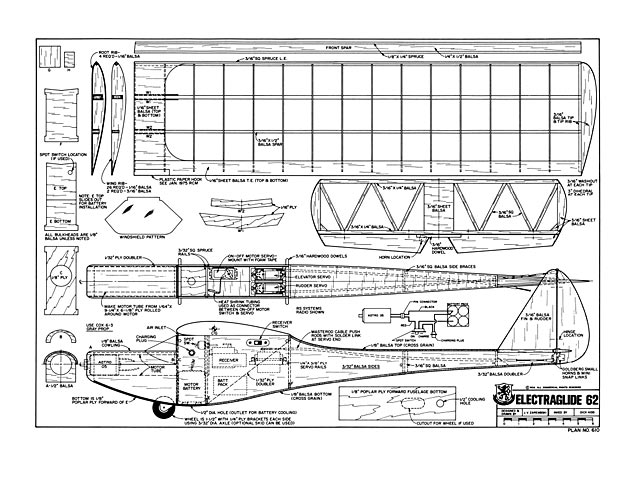 Quote: "Combining the best of two worlds, Jim Zarembski's Electraglide 62 is an electric powered sailplane designed for maximum soaring performance. Its quiet Astro 05 will take it almost out of sight, while its nine to twelve ounce wing loading will enable it to find even the most elusive thermals for quiet, effortless sport soaring on those lazy, warm summer days.

Editor's preface: The designer of the Electraglide 62 electric powered sailplane is a member of the Toledo Weak Signals Club as well as editor of their club newsletter. Twenty-four year old Jim Zarembski is employed as a Staff Industrial Engineer for one of the nations largest die casters. His R/C interests have revolved around sailplanes for six years while he has given electric powered models priority since early 1973.

Some of the photographs accompanying this article are of RCM's prototype of the Electraglide 62 which I built from Jim's original plans. This aircraft has to be one of the most enjoyable sport machines that we have flown. On a clear day the Astro 05 engine would take the Electraglide 62 almost our of sight, while in the power-off condition it flew very much like a conventional Standard Class sailplane. In fact, during summer conditions, 30-60 minute thermal flights were not at all unusual after the aircraft had reached maximum altitude during the power run.

You will find this machine easy to build, rugged, quiet and powerful, and combining the best of two worlds - soaring and powered sport aircraft. So, if either of these two facets of our hobby appeal to you, you can eliminate the hi-start or electric winch from one, and the messy, noisy fuel gulping engines from the other in this outstanding model by Jim Zarembski.

I have been fascinated by the concept of electric powered radio controlled aircraft since I first read of Bob and Roland Boucher's RF-4 in 1972. At the 1974 Toledo Conference, Astro Flight introduced the Astro 05, or 'Astro Pup,' as it is affectionately called. Roland demonstrated a small, highly maneuverable cabin model powered by the Pup and, to say the least, the crowd was impressed. Few onlookers had ever seen a modeler place his plane on an ice runway, walk 30 feet away, turn on the motor and take off. Once in the air, all that could be heard was the whine of the prop and the wind over the wings. The Pup was a strange but pleasant surprise.

Subsequently, visions of a small powered sailplane popped into my head. The Astro 05 would be an excellent motor for such a model. The unit weight is 13 ounces and, at a retail price of $35.00, it is the least expensive R/C electric propulsion system now on the market. It turns a Cox 613 prop at over 15,000 rpm with good duration and can be recharged from your car cigarette lighter in 15 minutes. I arranged to receive a pair of Pups which arrived in early spring of last year.

After spending most of the Summer getting acquainted with electric flight, the design of an Astro 05 powered sailplane was given first priority. The first step in the design process was to select the NACA 4412 airfoil. It was felt that a thick section would give good results with an anticipated high wing loading. After choosing the airfoil, I went to the drawing board with several specific ideas. The model would be a cabin type glider with the cooling air inlet required to keep the motor battery from overheating located directly under the leading edge of the wing. The fuselage would have to be strong, light, and quite simple to build. In order to prevent a 'banana' effect, the fuselage formers would be keyed to insure that everything would be in its proper place when the glue sets up. The first two fuselage formers would also locate the mounting tube in which the Pup would be friction fit.

The wings would have to be constant chord to allow the ribs to be stack cut on my trusty jig saw and the stab and rudder assemblies would be straight-forward and very similar to those found on many of the sailplanes now flying. The result of many hours on the drawing board and on the workbench brings you the Electraglide 62.

Upon completion of the first Electraglide 62 last fall I came home from work and charged the motor system to test the R/C gear with the Astro 05 running. There were no problems so I decided to go to the neighborhood schoolyard to make a few test glides. It was getting dark so the motor run would have to wait until Saturday. After frantically assembling the model, I flipped on the R/C unit and ran into the light Fall breeze with the bird above my head. With a firm toss the Electraglide was released. Prepared for a disaster, l was quite surprised when the first test glide was flat, smooth, and similar to that of any good sailplane. After a few more test glides, I lost my senses and turned on the Pup. Up she went in a gradual left bank. After circling the field once and gaining about 75 ft, the motor was turned off and Electraglide made a perfect landing! It was now nearly dark but I couldn't resist the temptation, and three other short hops were made on that evening. The excitement of flying your design for the first time is by far the biggest reward for many hours of design work. I hadn't had a complete motor run yet, but I knew I had a winner.

The first Electraglide 62 had an RS 3-channel installed for rudder, elevator, and motor on-off. I didn't have a 225ma battery
for the system, so I flew it for several months with a standard 500ma pack. The flying weight of this model was 36 ounces.

A typical flight consists of a hand launch and 3-4 minutes of circling climb (Fellow Weak Signal Club member, Rick Lederman, calls it an electric thermal, to an altitude of 500 ft. Near the apex of the climb, the motor rpm noticeably diminishes and the Pup can be turned off. Now the therrnalling begins! If no lift is found, the flight duration will average 6-8 minutes. (I have had trouble finding lift in the harsh Ohio winter! It's probably there, but I'm not going out in 14 inches of snow to find it.) The longest duration with my Electraglides has been a 13 minute flight, but I understand that the RCM prototype has surpassed 30 minutes. Needless to say when the thermals of next Spring start popping, be there ready to catch them.

This might be a good place to tell you that if the battery pack of any electric propulsion system is cold, it will not take a good charge. Hence, the first motor run of a day is always shorter than subsequent flights. This is nothing to worry about and this condition should be expected.

The drawing of the Electraglide 62, shown here, has a slightly shorter tail moment since the original was excessively long. If you decide to build an Electraglide, a total flying weight of 30 ounces should be your goal, although it will fly up to 40 ounces. The careful selection of wood, and the prudent use of adhesives will give the patient modeler a strong but light airframe. In addition, a 225ma battery instead of the heavier 500ma pack will save 2 ounces. The photograph of the R/C installation shows an effective way to eliminate the third servo to turn the Pup on or off. Finally, the wheel assembly can be replaced by a skid for a further weight savings. At 30 ounces, the motor run will take this model higher where there is more potential for finding lift. Without further ado, let's begin construction with the fuselage.

Of course, the first thing you should do is familiarize yourself with the drawing and construction photographs. Find two 3/32 x 4 x 36 in balsa sheets and splice them into one sheet 8 in wide. From this sheet, cut out two identical fuselage sides. Pin one side over the other and drill the holes for the wing hold-down dowels so they will line up perfectly when they are inserted later. Cut out the 1/32 plywood fuselage formers and fasten them to each fuselage side. Make sure you make a pair and not two left sides! I have found that 5 minute epoxy works well for this purpose. Next, wrap a piece of 1/64 plywood, 6-1/4 long and 9-1/4 wide, around the Astro Pup as shown in the photographs. Use aliphatic resin brushed on over the area that will wrap around itself. When forming the tube, Hot Stuff or any other cyanoacrylate can be used to hold the tube together while the resin dries..." 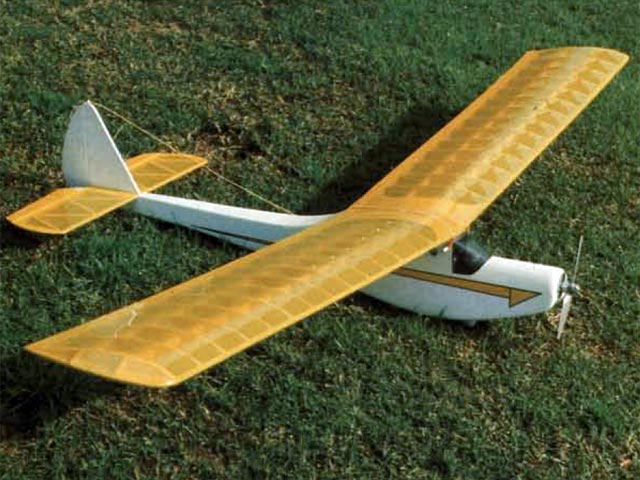