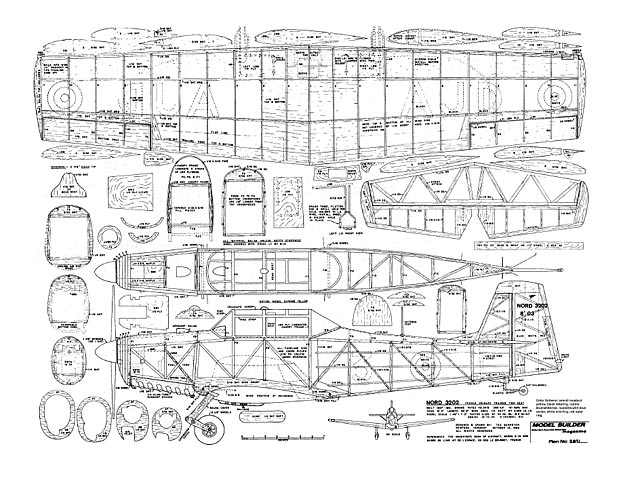 Quote: "Our author has discovered an unusual and attractive subject in this French primary trainer. Presented here in 1/8 scale for .19 to .25 size engines. Nord 3202, by Ted Schreyer.

Challenge is the common theme among, modelers. To make a model that looks better; flies faster, higher, longer, more reliable, more realistically, or more aerobatically; builds easier; is stronger; has more scale detail; or whatever it is that is desired in the model, represents the challenge to the modeler. In the 30s and 40s when Megow, Guillow, Comet, and other kit producers were putting out hundreds of kits in the 10-to 50-cent price range, this author built Nieuports, Spads, Fokkers, Aeroncas, Stukas, Spitfires, Fairchilds, Grummans, Ryans, and most every model kitted. These were scale models. After considerable years of practice, the models looked somewhat presentable, but they flew about as far as a strong arm could throw them, and with about as much realism. The psychological implications of this 'scale model/no fly' syndrome has probably prompted me to concentrate on designing scale models meant for flying.

As the model industry progressed to glow plug engines, which eliminated the bulk and weight of the coil, condenser, batteries, points, and accompanying electrical problems of the ignition engine. Then radio control equipment became available with reliability, small size, and reasonable prices, the second and final step in the miracle that allows us to design, build, and fly a scale model of any aircraft, including the jets with ducted-fan engines.

Fifty years ago the idea of being able to let a model fly out and then have it come back and land where it took off was just a dream. Now we can control our models so they takeoff, climb out, perform aerobatics, throttle down, glide in, and land. Absolutely amazing.

While browsing through the 1958 edition of The Observer's Book of Aircraft a three-view caught my eye, and the more it was examined, the better it looked for an R/C scale model. The Nord 3202 has a planform that approaches the classic pattern model, an in-line engine with neat cowl and a grasshopper-leg landing gear that is short but allows plenty of prop clearance because of the high thrust line. The model Nord 3202 is easily constructed, light-weight but strong enough for everyday fly-ing, looks good, and flies as well as any model yet built by the author. The model presented here is a 1-1/2 in to 1 ft scale, being 0.125 of the original aircraft.

The Nord 3202 is a two-seat primary trainer designed and built for the French Army during 1957 to 1961 and developed from the NORD 3200 and 3201. These Nords were the modern-day replacements for the Stampe SV4 biplanes and have a resemblance to the Fairchild PT-19 and Cornell, the DeHavilland Chipmunk, Zlin, Lampich Pajtas, and the Toyo TT-10, all of
which are great flying machines. The Nord 3202 is used for aerobatics and navigation training, has a maximum speed of 161 mph, cruises at 155, and a loaded weight of 2,689 pounds.

Most scale models are linear scale; that is, the lengths and areas and cross-sections are to scale. But how about the rest of it - weight, power, and speed, for instance? Included here is a chart comparing the model with the full-sized aircraft.

Assuming that my factoring is correct, this model is lighter, less powerful, and faster than an exact-scale representation would be. However, another factor to consider is that the air the model flies through is full-sized; the air molecules are eight times (diameter) larger in relation to the model than to the real aircraft. Although it would be possible to make a 5.25-pound model and power it with a 0.51 hp engine, it certainly wouldn't fly at 20 mph. Rubber-powered scale models might fly near scale speed, but they are tremendously lighter and lower powered.

FUSELAGE: The fuselage is built along the conventional box-type method, with two sides built on the plan, then crosspieces are added to form the basic fuselage structure. Formers, plywood pieces, nose pieces, stringers, and planking are added. The fuselage provides the strength and platform for the flying surfaces, so build it true and sturdy, choosing balsa for the job it has to do. Keep in mind that the model has to balance, so keep the tail light.

Before drilling the engine mounting holes, put engine, prop, and spinner together and site-mount it so there is adequate space between spin-ner and fuselage front. The engine is mounted with 0 to 0 thrust alignment. The photos show pipes coming out of the cowl for a metal tank, which was removed because it sucked air when the model was turned over to start the inverted engine. A regular plastic clunk-tank was installed by cutting a hole in firewall MM2. Depending upon the size and shape of the tank, you will have to cut and fit it into MM2 and provide a sturdy mounting, including padding for vibration reduction to prevent the fuel from frothing. Since an inverted engine starts much easier when the model is turned over (so the engine is upright), a simple plywood box was put together to caddy the starting battery, fuel, tools, etc. and a cradle cut into the top so the model can be turned upside down and held for starting.

Another problem in operation is that the engine is enclosed by the cowl; good for looks, but bad for cooling. The Nord has a nice opening for air to enter, but this air needs to go around the engine cylinder and make its way out the rear cowl exit. With the cowl shown on the plan the model flies, but the cooling is marginal, so any extra exit space would be a plus, even if it were to be non-scale to some extent. The removable bottom cowl piece goes on by slipping it on the front dowel keys, then compressing the brass clip strips and pushing the rear down into place..." 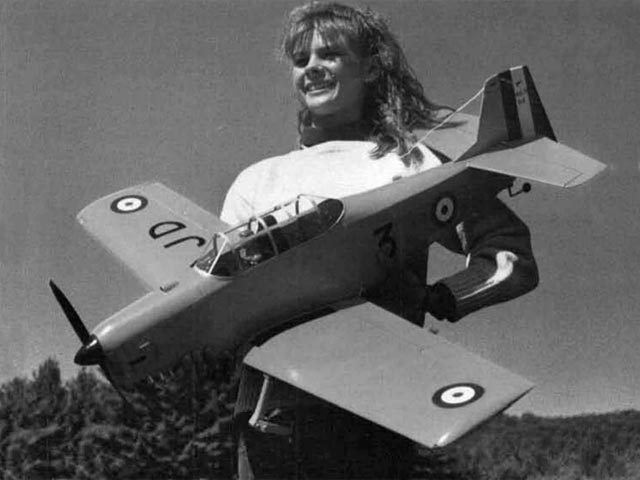