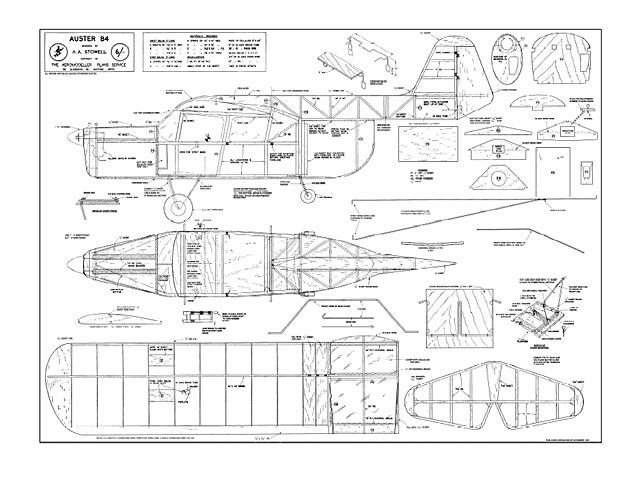 Quote: "An 1/8 scale model for radio control or free flight with 1.5 to 2.5 cc diesels. Auster B4 Ambulance Freighter, by AA Stowell.

WHEN the Auster Ambulance made its debut two years ago, many an ardent scale fan expressed the opinion that here, at last, is the ideal subject for scale radio control. But the Auster B/4 is not all that easy to reproduce to perfect scale and remain a reliable flier, as several modellers have already discovered. The near symmetrical scale wing section is one detail that has to be modified to Clark Y or similar, and of course, the dihedral must be increased slightly.

Here, in Mr Stowell's model, we have the ideal mean. A scale model blended with practical design, and a grand radio design at the same time. Portability has been considered, as will be seen in the two photos below, and silk, nylon or rayon covering advised as an aid to increased strength. Wing and wing struts are rubber tensioned and 'knock-off-able'.

The original flew both free-!light and under radio control with ECC 951 'A' receiver. It used a Mills 1.3 cc diesel and ED 7-3/4 x 6 in prop, but at 45 oz all-up weight, it could easily show improved performance with a 1.5 or 2 cc engine. Like the full-size aircraft, right thrust of up to three degrees is advisable to cure a natural turn to the left; though this scale model retains the original fluster fin and rudder, which has been altered considerably on the latest version of the real Ambulance, G-AMKL.

Building the wings and tail is a straightforward procedure, needing little extra explanation other than at the centre section. It will be seen that the dihedral actually starts at the fuselage centre line, leaving the two root ribs at the hinge joint at 90 degrees. The photo below left, explains the scheme in general, and also displays the detachable portion of the rear fuselage which is very handy for accessibility. As will be seen on the drawing, the radio receiver is best placed in the aft half of the fuselage, and it can then be reached either through the rear or the roof.

The fuselage is made by first assembling the basic 1/4 sq side, continuing the bottom longeron to F2. Build up with main formers, add bearers, and cut away longeron so that the complete undercarriage assembly on the ply base, can be fitted. Then add sheet bottom, and start tailboom with the base. Cement F7, F9 in place, add top, add spacers and when dry, attach firmly to the fuselage which is then sheeted over with 1/16. It is hardly necessary for us to emphasise the importance of this boom/fuselage joint. "

Direct submission to Outerzone. Note this plan file is 400 dpi and well over 4MB. If anyone can clean this up by removing the hatched background to make both it clearer to read and also a smaller filesize, I would be very grateful. Thanks, Steve.

Update 24/01/2014: Added supplement CAD re-drawn version of this plan, thanks to hogal.

Update 29/01/2014: Replaced this plan with a much clearer version (hatching removed) thanks to RogerClark. 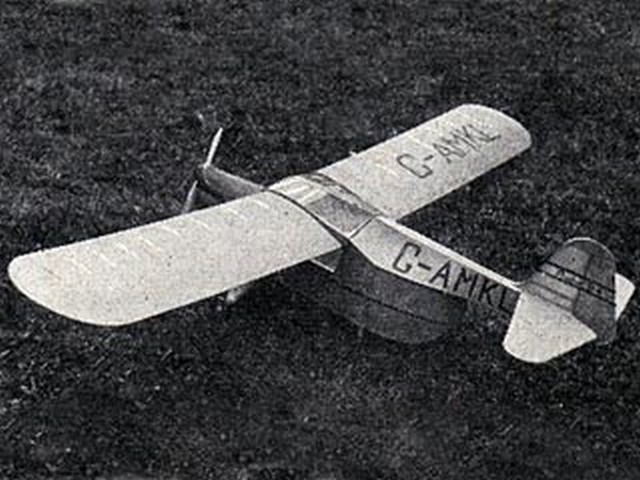