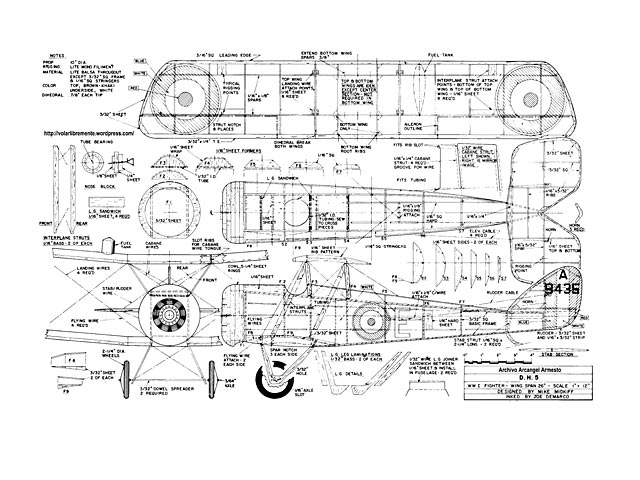 Quote: "Although considered to be the least successful of DeHavilland's de-signs, the DH-5 presents a unique modelling change of pace. Its strange, reverse stagger layout was an attempt to improve forward and upward visibility which had been enjoyed only by pusher biplanes, and so, the DH-5 became the next tactical development after these pushers.

The DH-5 was one of the early types which received the more reliable machine gun synchronizer that allowed forward firing through the prop arc. However, as the new DH-5s began replacing inferior aircraft on the front lines, many of the air crew were skeptical of their performance due to its unconventional appearance. These fears were largely unfounded, but for some reasons, high altitude performance was poor, maybe justifying some of the skepticism. This resulted in all front line DH-5s being relegated to ground and trench strafing, It was during the large infantry battles at, Ypres and Cambrai that the aircraft distinguished itself. Shortly afterwards, most of the DH-5s on the western front were phased out in favor of the superior SE-5A's.

At best, the DH-5 bridged the technology gap between the flimsy pusher and the later, rugged gun platforms like the SE-5a and Camel. At worst it was an average aircraft with a few shortcomings magnified by illogical pessimism.

I have always been intrigued by the reverse stagger wing layout insofar as its trim characteristics might be for flight. So, I had to answer my own question; just how would a reverse stagger fly as a model?

Construction. As far as biplanes go, this model is a straightforward WWI aircraft. The fuselage is unique, though, due to the transition of its cross section - circular at the cowl, changing to octagonal all the way back to the stab. However, on the plus side, the wing panels are simple and identical without 'windows' or trailing edge cutouts.

Rather than detail the basic construction of this model. I am going to highlight a number of unique (for me) construction methods, related to probable, troublesome areas.

Cabane struts. For years I never built biplanes because I could never get the cabane struts mounted securely or looking right! Even formed from wire and sewn to fuselage cross pieces, these appeared awkward and were difficult to align. The following method now works well for me..." 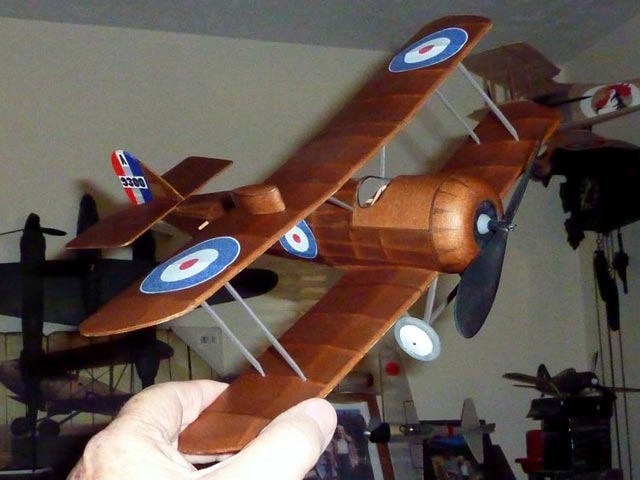 For the record...my model of what I consider the most unjustly maligned aircraft to participate as part of the RFC/RAF inventory during the First World War...the AIRCO DH-5 (oz5263). Build was inspired by the exploits of Captain Arthur M. Coningham of No. 32 Squadron, who in the span of 21 days (July 1917) shot down 9 enemy aircraft (most of which were the superior Albatros DV)...and on 3 separate occasions during that period scored multiple "kills." All of this was accomplished while flying the AIRCO DH-5, a much abused and maligned "inferior" aircraft. Someone forgot to inform Captain Coningham that he was flying a "dud." The good Captain went on to become Air Marshal Sir Arthur Maori Coningham, KCB, KBE, DSO, MC, DFC, AFC of WW2 fame. I might add that in a short 6 month period of combat service at the front, the DH-5 produced no less than 8 ace pilots, 4 serving with No. 32 Squadron alone.
Model is a "peanutized" version of Mike Midkiff's DH-5 (oz5263) as appeared in Flying Models Magazine, circa 1998...and weighs in at 20.3g...a chunk...but she's pretty...and I love her [main pic, 003-007]. Thanks again ever so much Steve and Mary for your wonderful efforts at Outerzone.
Neal Green - 17/05/2021
Add a comment