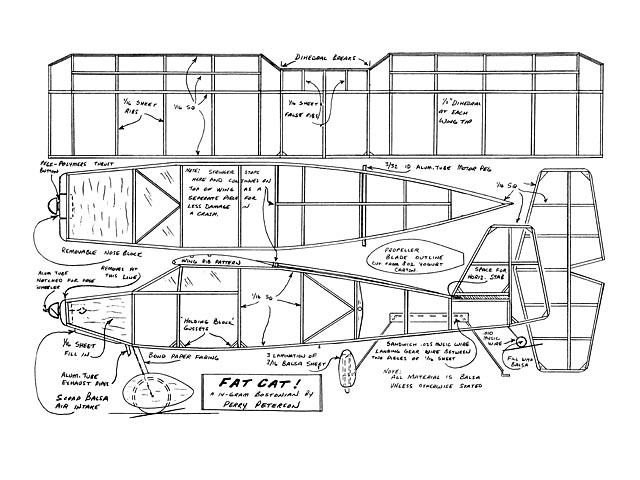 Quote: "Fat Cat, by Perry Peterson. Take a Peck-Polymers' Nesmith Cougar Peanut kit and widen the fuselage a bit, and you have a plane that'll conform to the Bostonian rules and fly great too.

The Nesmith Cougar has established itself as a great flying rubber-scale model. The Peck-Polymer's peanut kit has made the design a very popular entrant at most contests and fun-fly sessions. This plane is basically a Cougar with the fuselage widened a little to conform to the Bostonian rules. The fuselage of a Bostonian must be large enough to contain a theoretical box 3 x 2-1/2 x 1-1/2 inches in any orientation. Most Bostonians are designed so the 2-1/2 in dimension is vertical. This plane uses the 2-1/2 in dimension in a horizontal position, hence its name - Fat Cat.

With its wide fuselage, your Fat Cat may turn out heavy with more balsa, tissue, and dope than some Bostonians. Although it will be legal (weight rules say not less than 14 grams without motor for Bostonian West), it may not fly as long. Mine weighs 20 grams without motor and may not win any duration contests, but it sure looks great climbing in a rock-steady circling flight path. Barn door fuselage proportions will increase drag, but probably add to stability.

Now its time to build your Fat (and sassy) Cat. Most of the construction is familiar if you have built a rubber-powered plane with a box fuselage. The landing gear and propeller deserve special instructions for those who have not developed their own methods for these procedures.

Trap wheels in the pants by sliding the landing gear wire in from the back. Cut a slight notch in the back of each wheel pant to recess the short vertical portion of the landing gear wire. Glue in this short recessed wire with five-minute epoxy. Use epoxy sparingly - this can build weight up in a hurry.

Don't be tempted to omit the wheel pants or you will not retain the sassy character of your Fat Cat.

The propeller blades are cut from a plastic eight-ounce yogurt container. Turn the container upside down and draw a line from the bottom to the top. This line should be about 15 degrees offset to the left at the top. With this line as the prop blade center, use pattern on the plans to cut out a blade. Move over on the container and cut out the second blade at the same angle.

Carve out a spinner using a medium weight balsa block and cut a slot for the prop blades with a razor saw. See plan for proper angle. Press blades in the slots and you have an efficient homemade propeller. If the blades are a tight press fit, you can change blades. Experiment with blades cut out at different angles and different sizes. Just remember to keep the prop diameter at not more than six inches to be legal for Bostonian.

Soon you'll be watching your own sassy Fat Cat in the air!" 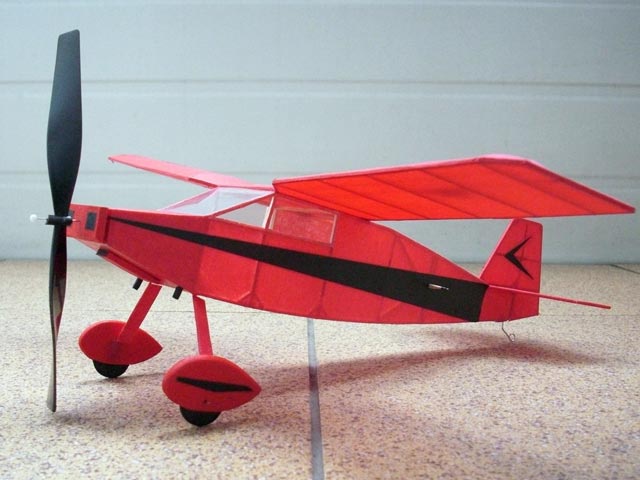