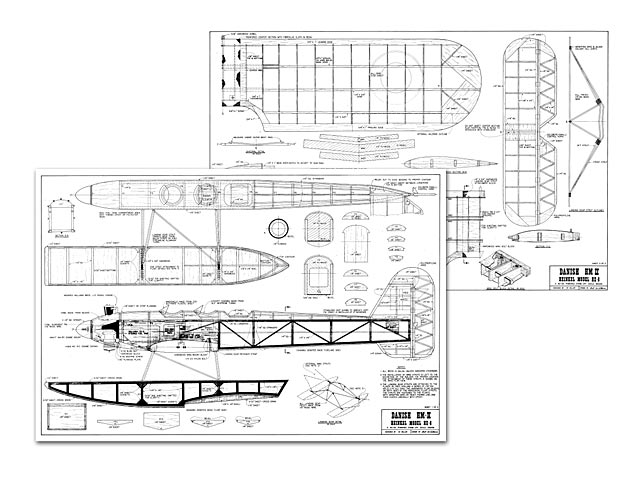 Quote: "In the early 1930's, much publicity was given to a continuing series of air show, long-distance air races, and other such activities. While designed to capture the public's imagination with their pure sensationalism, these events, in themselves, contributed little of practical value.

But if there were those in aviation who wished to bask in the glow of such strictly publicity-oriented activities, there were others whose unheralded service was providing a basis for the future growth of all aviation industries. One such little known endeavor was the aerial photo mapping of artic Greenland. The world's largest island, Greenland lies astride the busy North Atlantic air routes. With its rugged, mountainous geography, and unpredictable, arctic weather extremes, this pioneering project was indeed an ambitious undertaking for this early era in aviation history. Begun in 1932, in association with the Geodetic Institute, this program required six years of strenuous flying over the desolate artic landscape before being finally completed in 1938.

As Greenland is a part of the island nation of Denmark, the aerial photo-mapping assignment was given to the Danish Naval Flying Corps 1st Luttflotille. Formed on 12 October, 1926 this unit is the oldest numbered Danish military flight unit, the direct descendant of which is now the Royal Danish Air Force's Escadrille 721 (RDAF No. 721 Squadron).

The aircraft which the 1st Luftlotille used to conduct this photo-mapping assignment was the obscure Heinkel Model HE-8 floatplane. As this was the second hydro-monoplane type aircraft operated by the Danes, it carried their designation HM-II. An unusually large single engine aircraft by 1930 standards, the HM-II had a wingspan of 55 feet, and accommodated a crew of three in open cockpits, itself a real challenge in arctic flying. It was powered by an Armstrong-Siddeley Jaguar VI air-cooled radial 9 cylinder engine that was rated at 450 horsepower, The first aircraft of this type was delivered to the Luftmarinestation at Copenhagen on 17 August, 1928.

With its historic and relatively obscure background, functional design, and brilliant arctic markings, the makes an ideal subject for a sport-scale R/C floatprane. Built to a scale of 1.14 inches per foot, the 64 in wingspan model is adequately powered by either a .40 or .45 engine that gives a realistic, slow flight characteristic of the original aircraft's performance envelope (max speed 134 mph). With its extremely lighweight structure that closely follows that of the actual HM-II airframe construction, this docile model is an ideal introduction to the unique world of flying floats.

For anyone who has ever built a stick and tissue Guillow kit, the construction of the HM-II model is amazingly similar, although obviously quite larger. Since they present the only different aspect from the normal R/C land-based bird, the float construction is handled first. The basic 118- x 1/4- balsa framework is built directly over the plans (built in sets of two). Allow the top and bottom longerons to extend an extra four inches past the all end to allow for the stern curvature when the sides are later assembled. After removing the framework from the plans. laminate each to a sheet of 3/32" balsa. Make sure to build two right and two left sides.

Assemble the completed side laminations into a basic box structure built around the two 1/4-in sheet balsa anti-slosh bulkheads, formers FF1 and FF3. In addition to providing separate, water-tight compartments, these bulkheads also provide the main compression, shock distribution point for water impact. (And if you don't think water impact can be hard on floatplanes, try jumping into a lake at about 50 mph.) Once the box structures have been allowed to dry, add the 1/4-in square crossbraces and sheet the bottom of the floats.

The next item is the 1/8-in piano wire bird cage that joins the floats to the wings. The fore and aft struts are wire wrapped and silver soldered to their respective spreader wires that separate the two floats themselves..." 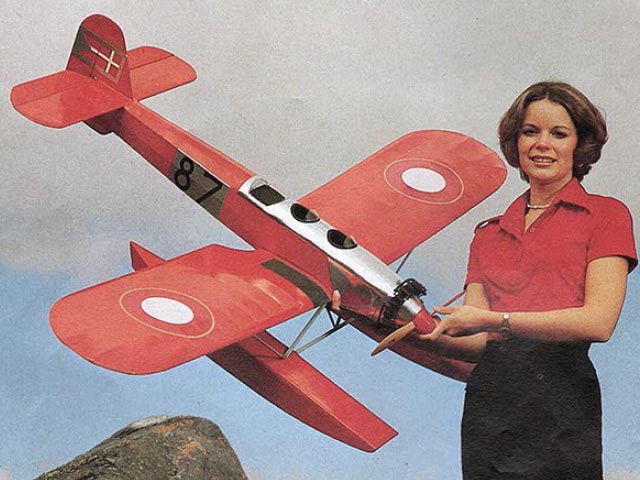 Hi Steve, We certainly do appreciate your keeping our HM-II plans available lo these many decades now since first published ...The model was designed from extensive photos and design references in DAN-MIL aviation history journal. The prototype model was built when 'wintering-over' in Greenland the winter of 1974-75. The fotos of Karen and the HM-II [see more pics] were taken that summer of 1975, at Sondre Stromfjord and its nearby Lake Ferguson. An early model was built from the RCM plans by the professional model builder-pilot Dick Hansen. He then went on to campaign it quite successfully for many years in the NW Seaplane Competition meets. Based on his success, as well as the models inherent flight and float handling characteristics derived from the original Danish design specs, the R/C model developed a bit of an almost cult-following. Articles were published in three languages (Dansk, English, and Japanese). Our many thanks again for your own interest and extensive efforts in keeping the historic Danish HM-II in current focus with today's R/C community. *NOTE: The Heinkel He-8 (Danish HM-II) and their later He-31 design were same basic airframe. Primary diff in the engines: He-8 with your Armstrong Siddeley Jaguar 14-cylinder twin-row radial, and the later, one-off, He-31 with its US Packard 3A-2500 12 cylinder liquid-cooled mill.
Ed - 03/07/2014
Hi Steve, Attached are digital scans of additional photos of my original design model of the HM-II; the real HM-IIs; and the real photomodel -- delightful Miss Karen Riddell. During the construction phase, I had given a 8 X 10 glossy print of my HM-II model’s completed, but as yet still uncovered airframe to Erik Stær. Erik was a Danish manager attached to the 4683rd ABGP there at Sondrestrom Air Base. The next day, he gave me the 8 X 10 inch glossy of the original HM-IIs. [see more pics 007] We thought you would find the personal background history on the HM-II of interest. Also possibly the attached digital scans as well. Skoal !
Ed - 03/07/2014
Hello All - if anyone has even an approximate wood list for the Danish HM-II, and is willing to share it, would be much appreciated. Living in France I will need to get wood shipped in from the UK and do not want to make any errors of omission. Many thanks....Neil
Neil - 10/01/2020
Add a comment