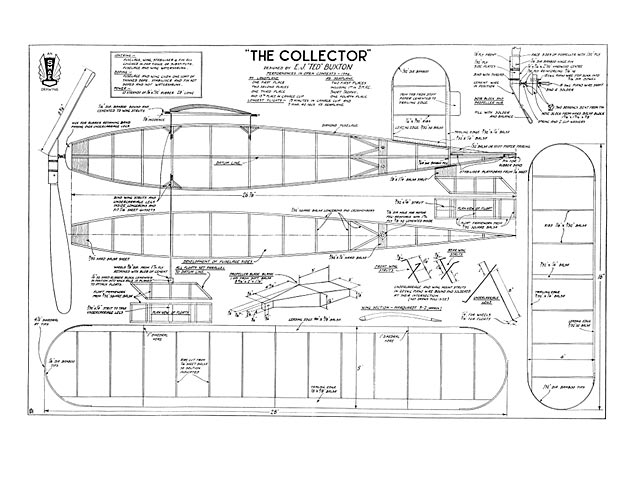 Quote: "THIS design was used throughout the 1946 contest season with a degree of success, collecting, in open competitions, one first, two second and one third places as a landplane, and two first and one fourth places as a seaplane.

The Gamage Cup competition provided its longest flight, some 13 minutes on the second flight, which, incidentally, was also the last, due to the dethermaliser fuse expiring. The dethermaliser was of the parachute type, a chute of 7 in diameter proving adequate.

After heavy rain, which did not stop until evening, this model, fitted with elementary floats, participated in the Short and Lady Shelley Cup contests. With tissue slackened due to the damp atmosphere, the 'Collector' flew the best time for either competition to win the Short Trophy. Lack of time in the Lady Shelley Cup event prevented more than two flights, which were good enough however for fourth place.

Fuselage: This is of normal construction. By cutting away the upper longeron for 4 in at the rear of the fuselage, a platform is provided for the stabiliser. While a two-legged under-carriage is shown in the plans, an un-wheeled single strut example was used on the original model, fulfilling all the functions of the more conservative type.

Stabiliser and Fin: These items are of simple construction, the tissue covering of which should not be water-shrunk or doped. The fin is cemented on the fuselage ahead of the stabiliser and is equipped with a stiff paper trim tab for glide circle adjustment.

Floats: The three floats are built up from 3/32 sq hard balsa with 3/32 in x 1/4 in material where the attachment members are located. Three floats are required. Cover with tissue, shrink, apply a coat of dope and waterproof with a thick coat of banana oil.

To the front floats cement blocks of 1/4 sq hard rubber where shown, and into these push the wire undercarriage struts. Set the floats parallel to the datum.

The rear float is cemented to the rear of the fuselage via the 1/8 x 3/4 in balsa strut shown. This float is also set parallel to datum.

Prop Assembly: The blade should be carved from soft balsa to a thin section and furnished with 1/8 in undercamber. It should be doped to a high lustre. The ply faces on the blade may be given an application of graphite (pencil lead) to ensure folding is free. It has been noticed that during prolonged clicking of prop stops at the end of the motor run of some models, considerable height is lost. To obviate this, a weak spring should be used to ensure that it will only operate on the last few turns of the motor.

Covering: The original model was covered with coloured Jap tissue, but present day substitutes will do, however. A coat of thinned dope is given to the fuselage and wing, none to the stabiliser and fin.

Power: A motor consisting of to strands of 1/4 x 1/32 in black rubber turns the prop on this job and should take 800 turns. A motor of pre-war Pirelli (14 strands 1/8 x 1/24 in) took 900 turns and produced considerably more power than seems available from present-day rubber. An 'S' hook is used to attach the motor to the prop shaft and is also used for winding purposes.

Flying: Only incidence used on this model was 1/8 in positive on the wing. After obtaining the flattest glide via fore and aft wing movement, power flight adjustment is accomplished with side and down thrust only. If the model you produce appears nose or tail heavy, this can be corrected by the discreet use of plasticine. In contests, where most people fly to win, crank on near maximum turns, place the model on the take-off board, let go and stand back; the device jumps straight off and so does the sea-plane off water." 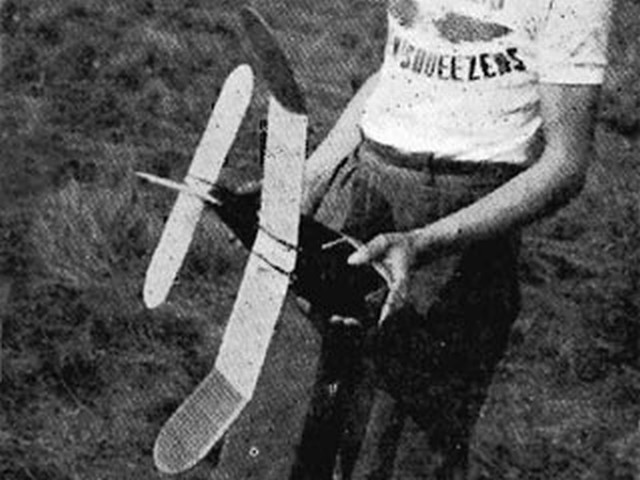