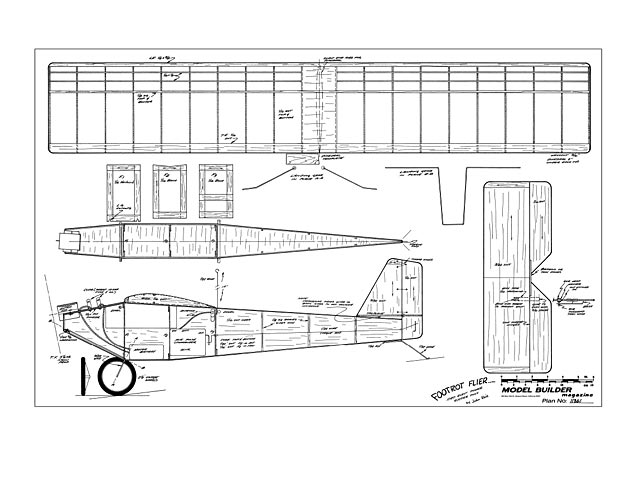 Quote: "An extremely simple electric free flight with RC assist through rudder control, this model comes to us from New Zealand. Its namesake is a deservedly obscure local comic strip. Why not build one? Footrot Flier, by John Reid.

The Footrot Flier is designed for rudder-only, radio-assist, 'freeflight.' It is possible to add a rudder to most free flight power models, but the dream of steer-ing serenely about the sky in search of ther-mals isn't always realized. Rudder-only models tend to nose up after a turn. For many converted free flight designs, this can be the beginning of a series of stalls. An expert knows to turn again out of the stall but the result is still an untidy flight pattern. The most common compromise is a nose-heavy trim that looks anything but serene.

Power stalling was reduced in early R/C designs like the Rudder Bug (oz7009) and Trixter Beam (oz2864), by a high thrust line/low CG. This is not quite the same as just adding downthrust! The effect of the low CG increases as the nose rises and speed drops - when a stall threatens, in fact. The Footrot Flier copies this layout. It can be trimmed to fly quite slowly and won't stall under power unless severely provoked.

Some rudder-only models simply refuse to turn out of a stall. The rudder seems to stop working at the crucial moment. The cause is usually blanketing of the rudder by the turbulent slipstream from the nearly stalled center part of the wing. Washout only makes this condition worse, locking the aircraft into straight flight earlier. The rudder of the Footrot Flier is carried well down into the clean air beneath the tailplane. There is always plenty of rudder response. A "Findragger" layout would make even more sense, I suppose.

Rudder-only landings are a bit firm at the best of times. Wind velocity gradient near the ground is the reason. (Downwind landings are smooth with a nice flare-out!) So, to avoid bent landing gear and reduce loads on the fuselage (thus allowing lighter structure), a torsion-bar spring is incorporated. This sounds sophisticated but is the simplest, wire-bent landing gear you can imagine. Look at the plan. This landing gear is so flexible that, earlier in its career, when the motor switch was located under the fuselage, the Footrot Flier would sometimes turn itself off when landing.

The model in the photos is over five years old. The tissue is faded and patched, but no structural repairs have ever been needed. After hundreds of flights, it still climbs up to thermal height on the original Astro 020 and cells. As far as my eyesight permits. Not that I manage to find thermals very often, but the Footrot Flier does 5 to 6 minutes anyway.

Construction is very simple, but you must always keep weight in mind as with any electric aircraft. Wood sections are fairly small so medium density balsa is GK., except for the tail surfaces, which should be light, and the wing top and bottom main-spars, which should be very firm (or spruce if you intend to add elevator control). Please order some tissue before you start. It really is the only suitable covering material for this type of aircraft.

Be sparing with glue, which is heavy. If you use cyano the building sequence doesn't matter. Otherwise follow the sequence below to avoid delays while glue hardens.

CONSTRUCTION: Cut all the bits out first. Note that the fuselage sides fit very economically on a four-inch wide sheet. The tailplane mount triangles are added later so that the top edge of the sides can be aligned with opposite edges of the sheet, If the front ends of each side are at opposite ends of the sheet, the bottom rear edge of each side forms a common line. Think about it and save balsa! Just take care that there is not too much variation in density across the sheet, which will result in unbalanced sides. Glue the tailplane mount triangles and the three 1/8-square rear stiffeners on each fuselage side. Make the bulkheads (ice cream sticks will probably be right for F1) and glue on the stiffeners for the tailplane and fin. Put all this aside to dry and turn to the wing,

WING: Make 18-inch washout templates with a straight taper from 3/16-inch to zero. This raises the rear of the outer ribs. Washout isn't usually needed with a low aspect ratio, rectangular wing planform. But it does make the stall even more gentle, which is welcome if the rudder is placed where it won't be blanketed!

Fasten the leading edges, the center bottom sheeting (leaving a gap for the lower mainspars which go in later), and the ribs to the building board. Tilt the center ribs using the dihedral template. The trailing edges glue to the top of the ribs; make sure that they are sitting right down on the washout template and the ribs. Now add the top spars, the main extending to the center rib, the small ones only to the edge of the sheeting. Fit the top sheeting now and let everything harden for a while.

I hope you used a length of cellulose tape on the plan at the leading edge, and along the washout template so that you can remove the wings from the board. If so, add the bottom mainspars (right to the center ribs), and the outer part of the wingtip ribs, which are not cut out for spars. Fasten the wings to the board and washout template again, while the glue hardens.

Sand the wings to remove glue lumps that would show through the covering. Cover each individual wing at this stage. Water shrink and apply three coats of thinned dope, elasticised with Castor oil. Fasten down the wings, for the last time, and leave until the rest of the construction is finished. Those wings won't warp. The two wings are epoxied together at the correct dihedral with no further bracing. The center section of the original model was a bit different, but the way shown here is lighter and simpler..." 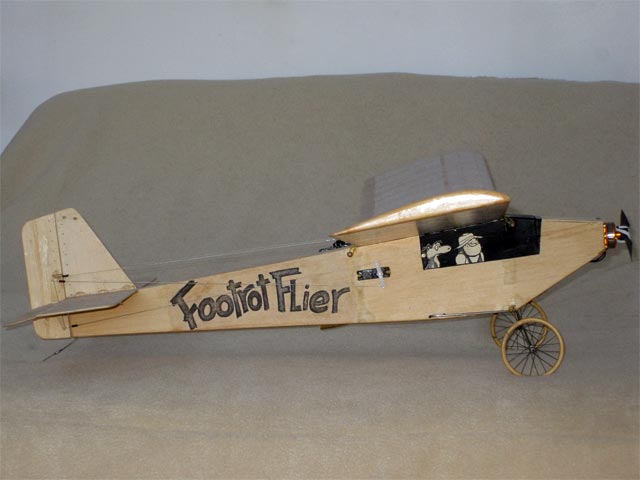 Have updated the main model pic with a photo showing the original prototype, quote: "...still flies occasionally, now much lighter with modern gear and RET", as posted by Footrot on RCGroups see https://www.rcgroups.com/forums/showthread.php?3779607-Rudder-Only-Build-with-Trimming-and-Flying-Hints/page3
SteveWMD - 16/12/2020
Hello, I built this Footrot Flier [pics 008, 009] in order to get myself a simple "trainer", to keep my gimbal reflexes alive, among my various non-RC-projects. Not wanting "just another foamy parkflyer", I was just about to design my own model for the purpose, when I discovered this irresistable and charmful model, and it was love at first sight...! This build was a pleasure for a dedicated balsa builder. A bit delayed however, due to my experiments with tissue staining. The wing is covered with Esaki Lite tissue over 10 µm mylar. Fuselage, stabiliser and fin are covered with Esaki Lite, doped on, which gives the sheet balsa a surprisingly good strength, or shall we say "resilience"... The motor is a 30 mm Czech "Nippy N29S 7A172" with its favourite 8 x 4 propeller. Flying weight with a 2S 650mAh lipo is 286 grams (10.09 oz) An interesting and well working design feature is the torsional sprung landing gear. Note that the plan calls for 3/32" piano wire, which is not correct. The designer used a 1/16" piano wire, while I have used a 2.0 mm. 1.8 mm would be a good choice. Maiden flight was a flawless and undramatic exercise, and the Footrot Flier - almost literally - flew right off the building board. This flight could be watched here: https://vimeo.com/591999014 To sum up: I am very pleased with this project. Best regards from Sweden,
Bo Jansson - 28/08/2021
Add a comment