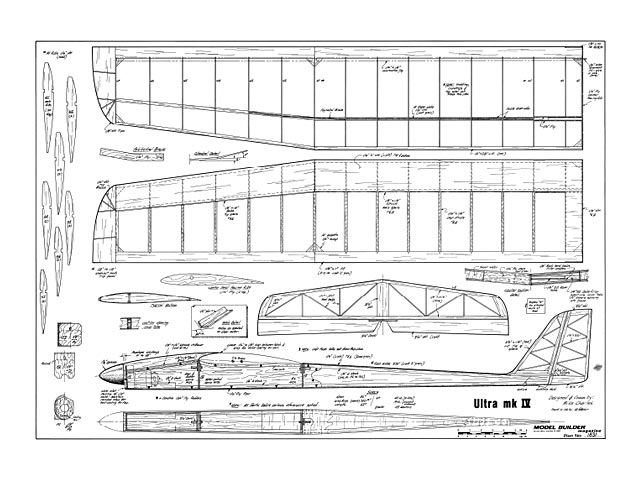 Quote: "The Ultra Mark IV is a 2m (or larger) woody designed around 1985 by Mike Charles. It is based on the Ultra Mark III which won the 1982 Leisure Electronics Grand Championship. The plans call for an Astro Flight Challenger .05 Cobalt motor, either geared or direct drive. The prototype used an Astro Geared 05. I strongly recommend a more modern, lightweight, brushless motor instead. The plans show only the larger wing. The 2M wing is made by simply not building two of the bays from the center section of both wing halves. The Ultra Mark IV was featured in Model Builder Magazine (plan #1831). The kit has a two piece wing, for ease of transport, and a very nice looking airfoil, which is called "one of the new European 'super' airfoils" in the construction article. I believe it is an Eppler 211, which has a nice little under camber on the end."

Quote: "Ultra IV, by Mike Charles. The latest version of the aircraft that won the 1982 Leisure Electric Sailplane Championships, and the $1,000 First Prize.

The airplane presented to you here is a direct descendent (as are most 'series' aircraft) of a previously successful design, which in this case, happens to be the Ultra MK 3, that I designed for, and with which I won the 1982 Leisure Electronics Grand Championship. At the time the Ultra series was begun, in the fall of 1981, the local crop of electric sailplanes fell into two general categories:

1. Good climb: Spans from 72 to 78 inches. Glide after motor run resembles a brick with a flameout.
2. Good glide: Spans from 90 to 100 inches. Climb without lift too slow to reach safe thermaling altitude using 05 class motor and 90 second or less motor-run rules.

There were several local efforts being made with propeller speed reducers, both commercially available, and home-built. These were used with Ultra #2 in an effort to produce a model with both a good climb and glide. Even though these efforts were experiencing only limited success at the time (evidenced by my choice of direct drive for Ultra's MK-III), it was plain for me to see that a speed reducer, which permitted the use of larger and more efficient propeller sizes, would be the way to extract the optimum in performance from my future electric sailplane designs. All that was left was for someone to produce a unit that would meet my requirements.

The commercially available speed reducers at the time were too bulky, with the resulting penalties in weight and drag. The smaller homebrew units were too difficult and costly for the average modeler to reproduce without a machine shop at his disposal. Both lacked what I deemed an important necessity: the ability to change gear ratios to suit individual model/prop/ motor combinations.

All this changed with the introduction of the Leisure Electronics prop gear drive unit. It is small, light, has different gear ratios available, and best of all, is readily available and inexpensive. All we needed now was a suitable airframe to mount it in. Rather than start all over, I decided to modify the already successful Ultra series models to accept the gear drive unit, and what you see here is the result.

The MK IV model has been stretched and widened here, slimmed and re-shaped there, and at the same time, been given one of the new European "super" airfoils, all the while keeping a close eye on the aerodynamic premise which started off the Ultra series in the first place; a light, fairly clean (for its simple construction) fuselage and tail surfaces, mated with a high lift wing section, flying at a lower angle of attack to reduce profile drag in the climb, but having the ability to operate over a wider-than-normal CL range for glide.

I knew on the first flight of Ultra MK IV that my design goals had all been met and exceeded. The climb with the Leisure motor and 2.5-to-1 gear drive was better than I had dared hope for and the speed range in the glide, especially, the slow flight end,was the best of anything I have flown to date. We are looking forward to the next competition in our area as we are sure the new Ultra will more than hold its own against other airplanes in its class. Until then we will have a ball just flying for fun, and you can too if you get busy and build one.

If you are considering building this model, we hope you are an intermediate or advanced modeler, for even though the excellent handling qualities in the air are suited to even a novice pilot, the experience needed for proper wood selection and some of the wing construction techniques, is not usually found in a beginning modeler. This would however, make an excellent first electric aircraft for the intermediate and higher skilled modeler.

What you are shooting for is a ready-to-fly weight of 40 to 42 oz, so all wood except leading edge sheeting should be light but firm 'C' grain. The LE sheet-ing should be the lightest you can find. For radio equipment, you will need most any modern three-channel RX, 225 mah battery, and three Bantam Midget or smaller servos.

Before starting construction, we recommend that you cut out all of the shaped pieces, as this will allow you to move from one structure to another as the glue is drying. I usually make the ribs first, as they are the hardest part. I made all the ribs for my Ultra in less than an hour, using the stack method, which I personally have better luck with than trying to cut individual ribs using patterns.

With that out of the way, let's begin, keeping in mind that the finished, covered airframe, less radio and propulsion system, should weigh between 13 and 16 oz.

WING:
1. Place trailing edge pieces on plan, cut to length, and mark rib locations.
2. Remove TE from plan and notch 1/8 deep at rib locations.
3. Replace TE on plans with front blocked up 1/16.
4. Using straightedge, pin TE and LE pieces in place.
5. Glue ribs in place, omitting rib at polyhedral break and rib #2, being sure to shim up the ribs 1/16 where they intersect the TE, to allow for the 1/16 x 1/4 capstrips to be added later. Be sure to tilt center rib at five-degree angle for dihedral, using template provided on plans.
6. Glue top spars in place, making sure joint at polyhedral break is in the proper place and that tops of spars are flush with top of ribs. Let glue dry.
7. Remove all panels from board and turn upside down. Check fit of shear web carefully. They must fit exactly with no large gaps between any gluing surfaces and must allow bottom spars to fit flush with bottom of ribs.
8. Glue shear webs in place and while still wet, glue bottom spars in place. Let dry.
9. Carve and sand bottom of LE on all panels so it is flush with bottom of ribs and continues the bottom shape of ribs. Also check fit of bottom LE sheeting, it should fit with no gaps between any of the gluing surfaces..." 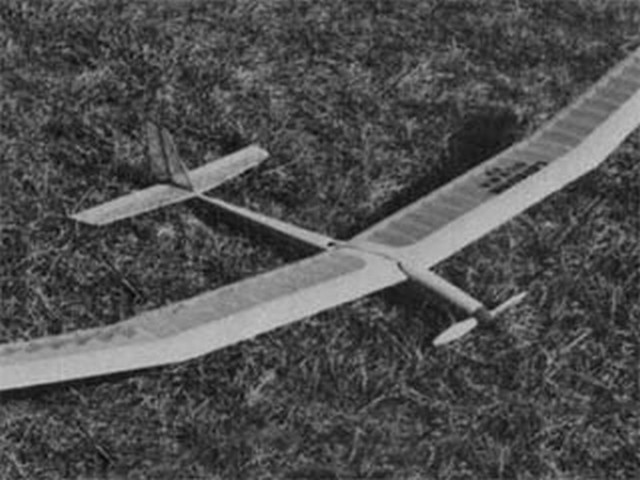