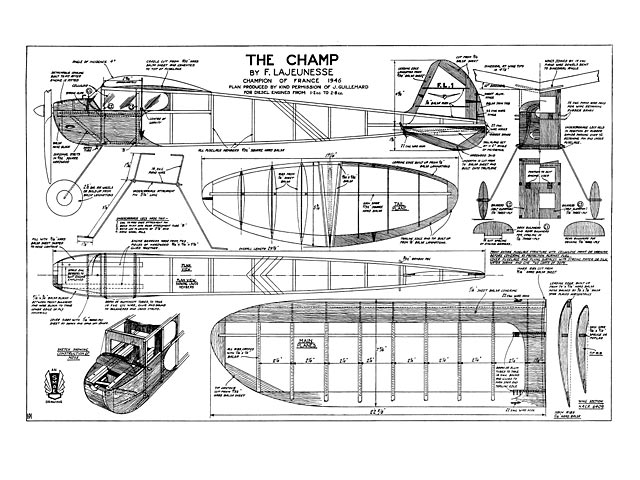 The Champ. Free flight power model from Model Aircraft May 1947. Plan produced by kind permission of J Guillemard. For diesel engines from 1.2 to 2.8 cc.

Quote: "This machine has established a sound reputation as a first-class contest model by its consistent performance during the eliminating trials and by winning the finals of the French Championship Contest in 1946 and it gave confirmation of its abilities during its visit to England on the occasion of the International Week, held at Eaton Bray.

While it has a semi-scale appearance, its performance is of a high order and it has shown itself capable of holding its own with the more extreme designs. It has been designed to employ diesel engines of from 1.25 cc to 3 cc and is therefore particularly suited to the Mills, ED, Majesco and similar engines. The original made use of either an Allouchery 1.25 cc motor or a Micron 2.8 cc.

Fuselage: The cabin type fuselage is built in the orthodox manner with 4 mm (5/32-in) hard balsa or poplar longerons and spacers, and it is best to make up the two sides in the usual way on the plan and join them together with the horizontal spacers and ply bulk-heads at stations C2 and C3. The ply bulkheads are cut from 1.5 mm three-ply (1/16-in) and not only serve to stiffen the front end of the fuselage, but help to ensure that it is assembled squarely.

Two lengths of brass or aluminium tubing to take 14 swg wire and 3-1/16 in long should be bound and glued in position on the lower struts of bulkheads C2 and C3 to take the undercarriage struts, and triangular gussets should be glued in position at each corner.

A short permanent decking is built forward of the front bulkhead to form an attachment for the lower end of the celluloid windscreen. The space between the engine bearers and the fuselage outline is filled 1/8 hard balsa sheet strips shaped to give a streamline shape to the nose in conjunction with the balsa nose-block..." 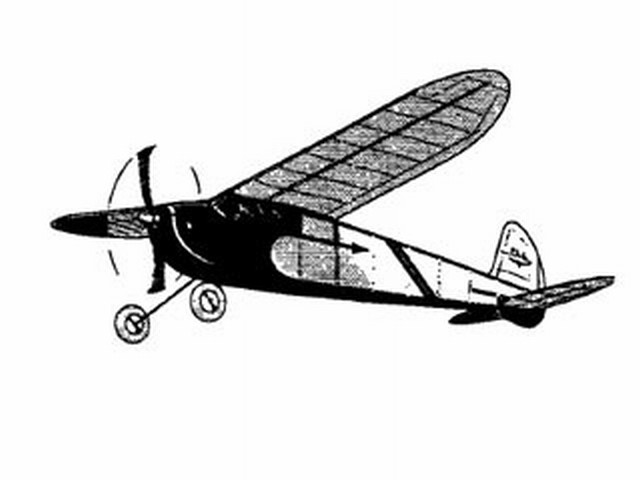