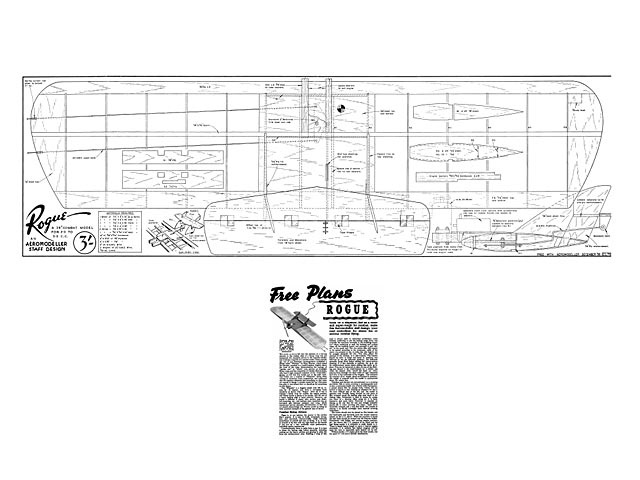 Quote: "Free Plans. Turns on a sixpence, fast as a racer and super-tough for combat, make this design your next controliner for sheer fun or serious combat flying. Rogue, by Aeromodeller Staff.

WE HAVE ALWAYS felt that the addition of a moving elevator to the trailing edge of a flying wing was not necessarily the complete answer to the manoeuvrability and liveliness required of a combat model. Some months ago one of our American contemporaries published a design called Whatizit (oz3922) by Riley Wooten, which raised the elevator, attached to a small tailplane, slightly above the level of the wing. Remembering the success of 'garden seat' or 'bench' type elevons on freeflight flying wings and the researches of Charles McCutcheon, who used a high mounted stabiliser on his Charybdis (oz5275) design, we felt that this model was on the right track. The Editor saw a number of Whatizits flying when visiting an American Army competition, and confirmed that the machine definitely had something, so that when we wanted to design a combat model for our Christmas free plan, it was natural that we should go for something on this layout.

The Whatizit is a biggish model with 340 sq in area for -35 engines, and there is inevitably some similarity of layout with 'Rogue'. After all, if one is making a flying wing for combat the engine position and bearer layout is going to be similar, and the use of a heavy leading edge is usual practice. However, our model is different in aspect ratio, section, spar detail, tail mounting, etc, and perhaps most important has an increased gap between tailplane and wing, which experiment proved desirable. Nevertheless we feel that we should acknowledge the Wooten model as being an early practical example of the general type of layout.

Combat flying virtues Rogue is, in our opinion, the answer to the combat flier's prayers. It is easy to build, immensely strong, fast, and extremely manoeuvrable, while retaining smoothness of control and ease of flying. It is, in fact, so smooth to fly that with the right hand on the handle it can put up a very creditable stunt performance, including square manoeuvres.

Constructionally there is really little to say. It is best to shape the leading edge before assembly, including cutting out the bearer notches and glueing in place the front ply reinforcement strip. Building a wing of this type is always open to individual preference, some builders preferring to pin the leading edge down and assemble the structure vertically to the building board, and others preferring to pack the leading and trailing edges off the building board, and proceed to add ribs, etc., in the usual way. The two centre ribs will require to be spaced according to the crankcase width of the motor you propose to use, in order that the bearers can lie snuggly alongside the ribs. This also affects the position of the notches, as is self-evident. The bearers should be sawn to shape and fitted in position, and followed by the ply bellcrank platform, the belicrank assembly being fitted before adding the centre section sheeting. It is also desirable to position the 1/16 in ply fin reinforcement pieces before adding the lower 1/16 in sheet. Fins can be cemented in place on top of the sheet-ing and clipped to the reinforcement by a clothes peg while the cement dries. Install the lead out wires, passing these through two short stubs of tube cemented and sewn to the underside of the wingtip. The outboard tip requires a 3/4 oz weight, glued and bound in position; this weight is essential since the model is symmetrical about the centre line.

Tailplane and elevator are conventional, as is covering and finish. Silk or nylon covering is recommended and, in fact, a prototype model was covered with Permatrace, a special plastic film for tracing work, which will not stretch or shrink or tear. Finding an adhesive for this is the most difficult part of the job, and the model in question used Evostik, being covered in one piece of film wrapped round the leading edge and stuck to the trailing edge. Permatrace is hard to come by unless you know of a drawing office using it; it is fairly expensive and quite heavy. However, it requires no doping at all, and thus for cost and weight probably equals silk or nylon covering with dope. Apart from incredible strength and a very fine finish the trouble of putting it on hardly outweighs more normal covering techniques.

The motor should now be placed on the bearers and slid backwards and forwards until the model balances exactly on the CG shown. When the position is found the bolt holes should be marked and the bearers drilled. Experiment with ballast and varying engine position, etc, has shown this CG position to be ideal, and for best flying results it is advisable to stick closely to it. There is ample bearer length to move a heavier engine rearwards; it is unlikely that lighter engines will be used, but even so reasonable spare bearer can be left.

Without doubt a 3.5 engine gives the best results, but any good 2.5 will prove entirely satisfactory. " 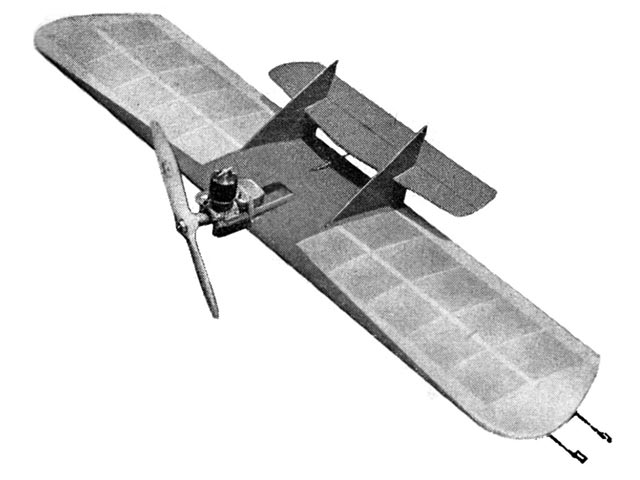