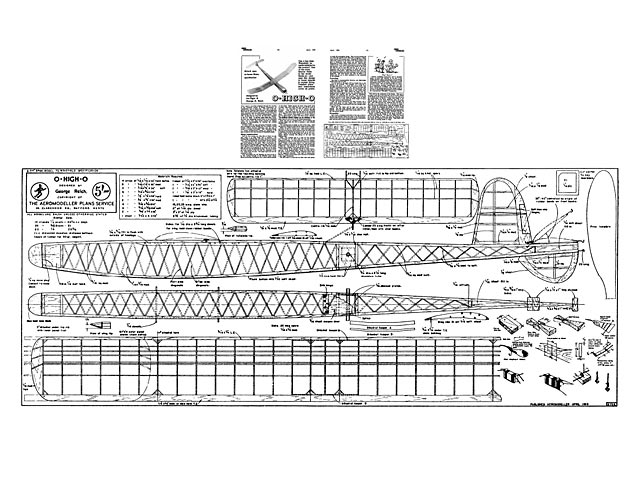 Quote: "44 inch FF rubber Wakefield from Aeromodeller April 1959. Interesting to note that what now looks like quite a complex build was, in 1959, considered a 'novice' project!"

Quote: "O-High-O. Can a top-class Wakefield be made suitable for the novice? One of the most famous clubs in the world thinks so - and uses this design to boost interest in contest flying. Detailed plans and instructions cover all points. Designed by Joe Elgin & George A Reich.

THIS DESIGN HAS been prepared through the courtesy of the Cleveland Society of Model Aeronautics, an organisation new in name only. The club is the out-growth of the Cleveland Balsa Butchers, whose beginning dates back to 1937 and the CSMA has probably been more successful than any other group in that country in representing the US in World Championships. Since 1951, no less than six times has the club had a member in the US Team. in pre-war years (then the CBB), the club was represented several times on the Wakefield Team, and in 1939, Dick Korda attained the highest honour in Aeromodelling by winning the coveted Wakefield Trophy.

In recent years the rules governing Wakefield models have undergone several changes that now enable a model builder, without previous experience with this type of model to compete favourably. This Wakefield design is a simple straightforward model, yet designed to be able to hold its own with the best of Wakefield models.

Wing construction Start by first cutting out wing ribs as shown on the plan using 1/16 sheet balsa, soft to medium. The leading edge, trailing edge, and spars should be medium hard. The trailing edge can be purchased already shaped.

Covering the plan with waxed paper will prevent the glue from sticking to the paper. Start construction by first pinning the leading edge, trailing edge, and the three lower spars in place on the plan. Note that the trailing edge will have to be packed up as shown on the plan. The ribs can now be cemented in place. Be sure to match the lower surface of the rib with the underside of the TE where these two join. The upper spars can next be cemented in place.

After thoroughly dry, the dihedral can then be put in by first cutting through at the dihedral joints where shown on the plan, leaving the 2-1/4 in centre section pinned on the plan. Before gluing the inner wing panels back in place with ends raised one inch, trim off the ends of the LE, TE and spars so they fit without any gap between. Next glue in the 1/16 plywood dihedral keepers. The three centre ribs will have to be shortened 1/16 in on each end to allow the plywood to be slipped in place..." 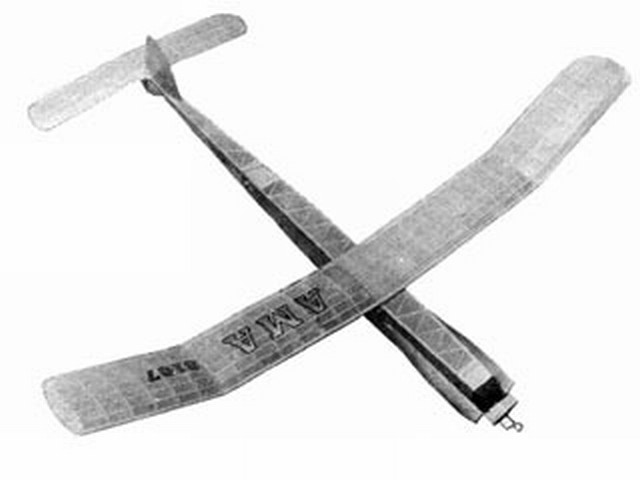