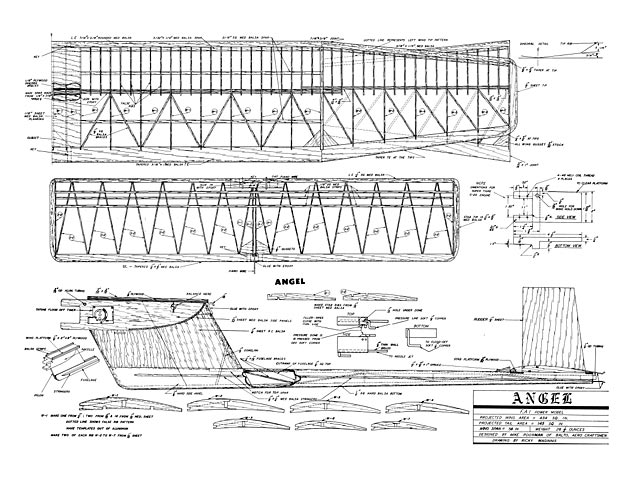 Quote: "The design presented here is the fourth of a series started in 1959. The first was a pylon type with some very vicious tendencies. However it did reach the semi-finals. The second pylon ship was abandoned immediately after building due to very little improvement in stability. It was then I decided upon the hi-thrust force arrangement. I found it able to handle as much power as it is possible to pack on the front end and not to be too critical to torque. In fact, I have changed to different make and size props with very little disturbance of the power adjustment. Almost unheard of in a pylon ship, isn't it?

You may question, as several have already, the short tail moment. This will permit that tight turn for dynamic soaring in the windy weather. I insist too, that the tail should be kept to a minimum weight. This will reduce the pendulum action for excellent stall recovery. These two features give a quick transition into the glide from almost any altitude she has assumed when the engine stops. The windier it is the better she will fly.

With the 6409 airfoil and 8:1 aspect ratio you have a fine all weather wing. Maybe the glide isn't quite as good as the higher AR wings, but on windy days (and we sure get 'em) you will be flying instead of repairing. For calm weather just open up the glide turn.

Our hi-thrust design has never been out placed in eastern FAI competition, except when it was blown away and lost for 2 weeks at the very windy 1960 semi-finals.

The ship may appear to be a frail bird but my pair have held together very well having flown hundreds of times under all kinds of weather conditions. In fact No. 2 is wearing the wing from the 1959 model.

A word of advice, power is most important. If you are seriously considering FAI competition and the engine you have selected won't turn an 8x4 or equivalent at 18,000 rpm or better, get one that will. It is only by tremendous speed in the climb that you get the good transition. The forward speed after the engine cuts puts her over the hump and into the turn.

Construction: not being recommended for the beginner and assuming you know how to build, we will chop most of the details for just a few hints. Add 3/16 in wash-in to left inboard wing panel..." 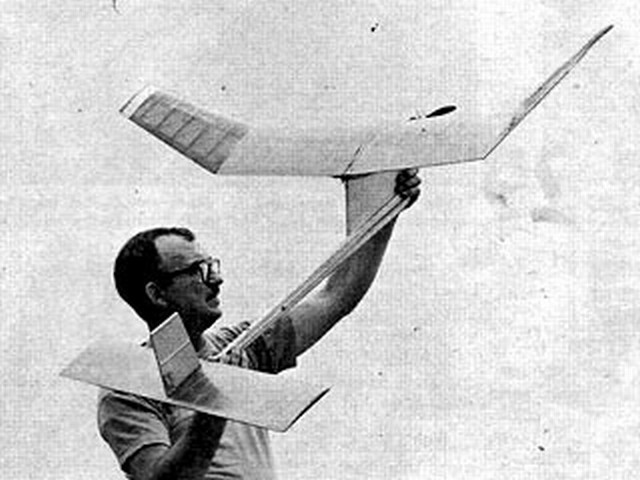