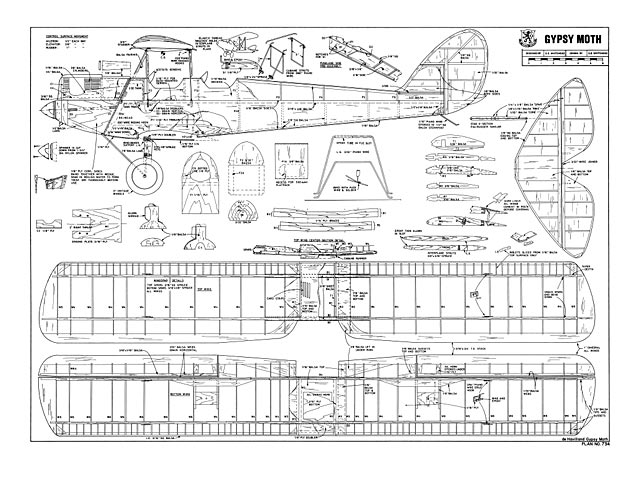 Quote: "Of the many thousands of DH 60 Gypsy Moths which were made between 1925 and the mid-1930s, only about 36 examples remain, 7 of which are in the USA. So if you want a Gypsy, you'll either have a long wait, or will have to make do with a model! The first scale model I ever saw performing was a big, light 5 ft span, single channel Gypsy Moth back in 1958, and I've had a soft spot for the ship ever since. One day, the urge became unbearable, the drawing paper came out ... and there she was!

The model is not far from scale. The engine compartment is slightly wider than scale in order to accommodate the HB .20; the wing section is 12% Clark Y instead of 6% RAF 15; and the wings are banded on. All this emphasizes that the ship is a sport model. A glance at the plans will show that she is quite lightly built. So if you're a lousy flier, get in some practice, and if you're between average and ace. please don't add excess weight by beefing her up, as you'll ruin the performance. She's strong enough to stand up to anything in the air, and flexible enough to survive many a rough landing. Mine has had hundreds of flights, and even more landings as I like doing 'touch and go's', but I'll say a word or two about flying technique later.

My Gypsy's color scheme is that of Amy Johnson, and you shouldn't have too much difficulty finding an attractive scheme. In fact, I never let the absence of a good scheme prejudice my choice of subject. If diligent research is fruitless, then I merely paint the ship the scheme I'd have put on the real one!

CONSTRUCTION NOTES :The fuselage is a simple box structure, with all sheet sides just like the full size ship, and the only complicated part is the engine cowl. The empennage employs an interesting structure, which is light and strong. The wings are cantilevers, but the interplane struts usefully share out lifting loads, even though the elastic wing bracing is only decorative.

Fuselage: Choose light balsa, but not brittle stock. The diagonal joint between the cowl sides and fuselage, and the narrowing of the cowling towards the nose, mean that the ply cowl sides need to be pre-twisted as shown on the plan - a simple task, but best done first so that the jigged sides can be drying out while you do something else.

Contact glue F1A to F1, and doublers D1, and D2 to the fuselage sides. Cement 1/8 square and 1/8 x 3/16 balsa longerons and uprights to the sides. Glue P1 in place. Join the fuselage sides with F11-1A and F2A, ensuring squareness, also gluing in place the cabane supports S1, and the 1/2 x 1/8 balsa cross braces at front and rear of lower wing seat. When set, join the tail end with the 1/4 in square tail post, epoxying the tail skid in place. Fit all formers and 1/8 square bottom cross braces.

Bind the cabane struts in place, carefully incorporating the slight forward slope of the main 'verticals' then solder the lop joints, epoay the binding and, finally, add the top decking. Glue the ply cowl sides, M1 and C3 together, butt-joining the lot in place on F1. First check the twist in the cowl sides by dry pre-assembly. If wrong, re-soak with more or less twist as needed, Make the top cowling referring to the photos (but not to the paint finish!). Fit the ply bottom piece, bottom 1/16 sheet and check the tank fining. Add the 1/2 in sheet stab seat.

Empennage: The sandwich method used is really strong, but my model needed 1 ounce of tail weight to optimize the CG position. Therefore, very light 1/4 in sheet may be in order, provided you don't nylon cover or tar it. Remember the tail moment is long - however, I like built-up tailplanes, so have no difficulty in selecting my method!

Butt-join 1/32 sheet to the full width of thee stab or fin/rudder and cut out the complete outline in one piece. Build the outline, spars, and 'ribs' on one side, pinning down flat until dry, then turn the job over and repeat the process, Sand to section, then marvel at how light, yet stiff the surfaces are. Separate the moving surfaces.

Wings: I once read that wood is a poor building material when used in compression, but good in tension. Shortly afterwards. I had 3 out of 4 top spars on one side of a small bipe collapse in compression after a particularly hairy snap maneuver. Luckily, the bottom spars didn't collapse, so I was able to have another 3 flights before going home! However, I now make the top spars of my bipes of spruce, instead of balsa, and of bigger section than the bottom spars. Other people solve the strength problem by using I-beams, D-boxes, or veneered foam..." 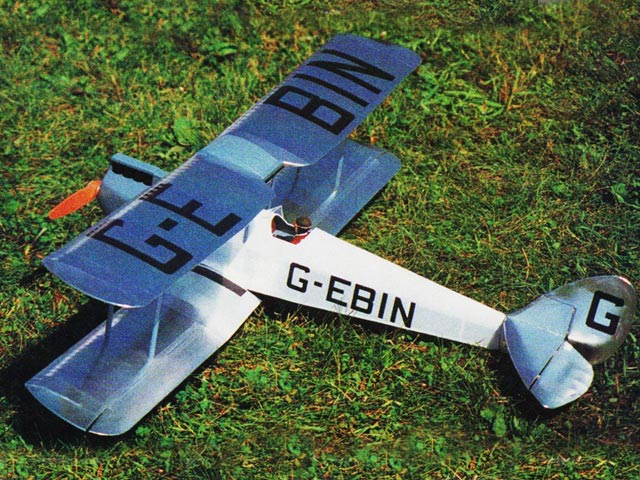