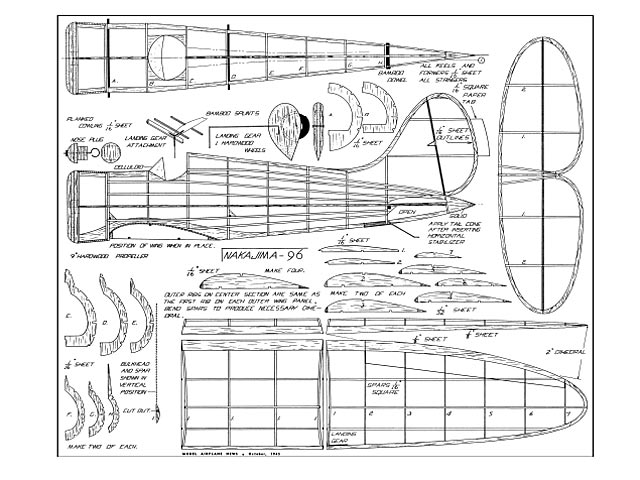 Quote: "No one should fail to build this swell performer - its construction has been simplified so that all who start should finish it. Nakajima 96, by J Bligh, N Kirschbaum.

HERE is a stubby-nosed snappy little Jap fighter model worth anyone's time and effort to build and fly. This Nakajima 96 single seater resembles the old Boeing P 26A and was most probably copied from it. The Nakajima is a 1936 model and was good in its day. Some were still used in the more remote fronts confronting Japan at the beginning of her onslaught against the Allies. The ship is exceedingly maneuverable being able to turn on the proverbial dime. Eyewitnesses in China reported that this wicked little machine could stick its nose up and pull straight away from any pursuer, then 'flop over in an impossible loop of 300 or 400 feet' and dive for a kill. This feat is attributed to the two-foot-high-fin that runs from the cockpit back to the rudder fin. The ship manages to hit 285 mph with its 750 hp aircooled engine. A retractable landing gear version topped 315 mph. It has a wing spread of 35 ft 6 in, a length of 25 ft, and a wing area of 170 sq ft. Service ceiling is 31,000 ft, and its range is estimated at 440 miles. Its landing gear is non-retractable.

CONSTRUCTION: This model presents the problem of tail heaviness due to its extremely short nose. Two original models were built, the first entirely of pine, and the second entirely of balsa. While the first model had to be corrected considerably for tail heaviness, the second was easier to balance. The solution to this problem, which arose from the long tail moment arm and the comparatively short nose moment arm, was to construct the whole model of light balsa except for the solid nose block and planked cowling. When building this model, construct the whole nose unit of pine or very heavy (hard) balsa. The nose should also be heavily doped. While helping the balancing problem it also creates a crash-proof nose.

Cut the plans out, or trace them, pin them together on a piece of corrugated pasteboard and place a sheet of waxed paper over them.

FUSELAGE: Cut out the four keels (1/16 sheet balsa) and the bulkheads, two from each pattern (1/16 balsa), as shown on the plans. (Also cut out two bulkheads from 1/16 sheet pine. These bulkheads are complete circles and constitute the foundation of the planked cowling. Obtain the radius for each bulkhead from the plans.) In cutting out the bulkheads, mark, do not cut, the stringer notches except those for the keels.

Pin top and bottom keels to the side view and cement half the bulkheads into their positions. Then cement the third keel (one of the two side keels) into the prepared notches making sure each bulkhead is in an upright position..." 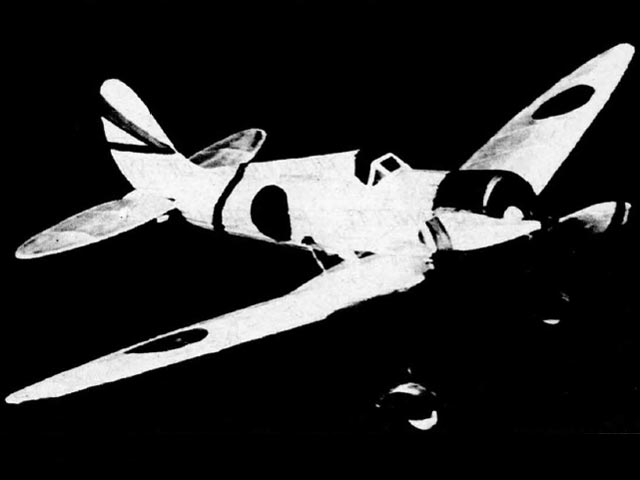 Despite the plan and article calling this a Nakajima Type 96, it appears to actually be a Mitsubishi Type 96 - the A5M2 Claude.
Roger Ritter - 29/06/2021
Add a comment