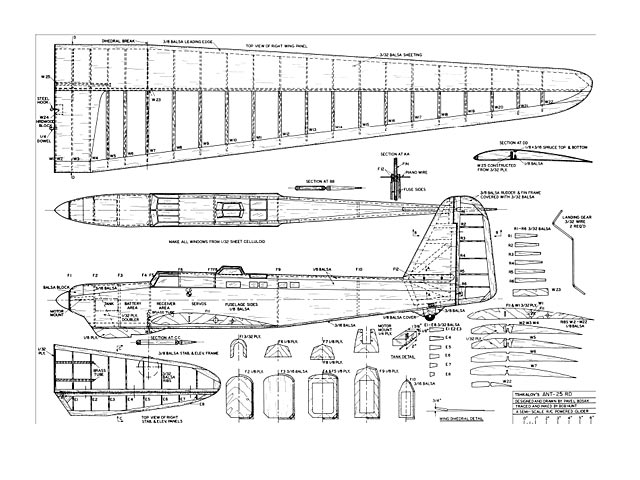 Quote: "A Stand-Off Scale powered glider that was never really a glider but a ship designed to break distance records. Ant-25, by Pavel Bosak.

Recently, the concept of the powered glider as an R/C ship has been gaining some measure of popularity in many countries. By 'powered glider' I do not mean that well-known sort of arrangement that entails placing a low efficiency engine on a pylon above the wing and causing much drag thereby worsening flying characteristics. Engines used in powered gliders are usually more efficient than the auxiliary engines and they are usually placed in the fuselage nose and under the engine hood, This makes the glider appearance as well as the powered flying characteristics much more acceptable.

Powered gliders, usually built as semi-scale ships, also have other distinct advantages for certain types of flying over other, more classic designs. Besides their scale appearance, which I find pleasing, they are easy and slow on their take off as opposed to an unpowered sailplane on a high-start launch. You also don't need all of that space. The slower and more uniform take-off also gives the pilot more time to think and control his aircraft that other R/C types do. With elevator control and a slightly larger, throttled engine, basic aerobatic figures can be taught easily. All things considered, powered gliders have a lot to offer and we can presume that they will continue to attract many fans.

The prototype: When I decided to build a motor glider, I also decided that it would be a model with low fuel consumption, not need too much service or concrete runways and that flies nicely. In thinking over what model to build I looked at a lot of magazines and I noticed ANT -25. The authentic plane was not a glider of course but I was so much attracted by its wing span that I decided to build a motor glider version.

ANT -25 was constructed by AN Tupolev and production of the first two prototypes began on July 1, 1932. It was specially designed for long, cross-country flights. The first take off was in 1933. The engine of the aircraft had high specific speed and a small, efficient propellor. The duration of the first flight was 48 hours and at the speed 212km/ hour the distance covered was 7200 km. That is why the second prototype' attracted more attention at its first take-off on the 10th of September 1933. A new engine was installed in it. In spite of this the flying range was not longer than 10,800 km. The cause of this 'short' flight was found to be the corrugated sheet on the wings. Solution was to lay cloth in sheets on the wings and elevator and the surface was then varnished and polished. The results were satisfying. Flight time was now 81 hours with a flying range of 13,200 km.

The record flights were started from the airport of Scelkovo, where a new concrete runway was built. It was 4km long and on a moderate slope so that the take off of an overloaded aircraft was easy. After some long distance flights over USSR territory the aircraft flew over the North pole on July 18, 1937 and landed in Portland, Washington, on the 20th of July. The crew were VP Tshkalov, GF Bajdukow and AV Belyakow.

My model is not a scale flying aircraft and there are moderate adaptations on it. Elevator is enlarged and so are the wing tips. Even the undercarriage is specially arranged. On the prototype it was in the wings and retracted backwards. On the model it is mounted in the fuselage and, if you wish, can be dismounted. When I fly on grass I use a landing ski which, in the side view looks like an oil cooler. My model is also without any details of the authentic plane.

Building the wing: The wing is of all-balsa construction. Begin the building with the ribs as per the plan. Ribs W2-W6 are made exactly according to the plan and the rest are cut out together as follows. Cut plywood templates of ribs W7 and W22. Now cut 14 balsa rectangular and screw them between the two plywood templates making sure that the relationship between the templates is correct by lining up the spar slots in the templates. All the ribs are thus made together and the accuracy of the double-taper wing is assured.

Build each wing panel in two parts, the center section and the longer main tapered section. Only after spar web and spars are assembled onto the ribs and glued do you join both wing parts together with the help of the plywood dihedral braces W23. Before ribs W2-W5 are glued in place they must be strengthened by doubling the front of them with plywood. After assembly, glue the sleeves for the steel spar which is used for fixing the wings onto fuselage. Now sheet the bottom of wing with balsa as per the plans and cement hardwood block W24 in place. Now sheet the top of the wing. After the wing has been sanded, cement outside ply rib W1 in place. The peg for fixing the wing and hook for tightening both panels of the wing to-gether by rubber bands will be fixed in place during the fuselage assembly. 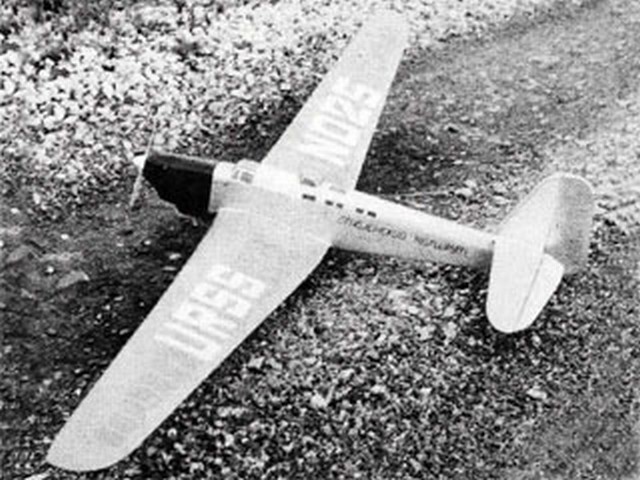 Just to make sure it is clear... A model from the plan may well behave like a powered glider - but the "real" Tupolev ANT-25 was a long-range experimental aircraft that broke some distance records in mid-1930s. Wikipedia has an article with details.
anon - 02/01/2014
Vancouver Washington. Portland is in Oregon.
Ralph Suter - 15/09/2019
If I ever have the good fortune to meet Pavel Bosak, you can be sure I'll tell him that.
SteveWMD - 15/09/2019
The plot thickens. At a point in the Chkalov over-the-pole flight from Moscow to San Francisco CA (there's another SF in Colorado and another in Minnesota now extinct but I think these are not in the present scope) they did pass Seattle WA and Portland OR but bad weather forced them to turn round and land at Vancouver WA, now a suburb of Portland OR, just across the Columbia river. Please extend my regards to PB when you meet him.
Miguel - 15/09/2019
Is Pavel still alive? Or is there sort of a morbid joke in these comments?
Lou - 17/09/2019
Honestly I do not know. If the reply to your question were 'yes' it would mean serious disrespect to one of the makers of our common hobby. I believe the irony in the first reply would allude to the unlikelihood in geographical terms.
Miguel - 17/09/2019
Add a comment