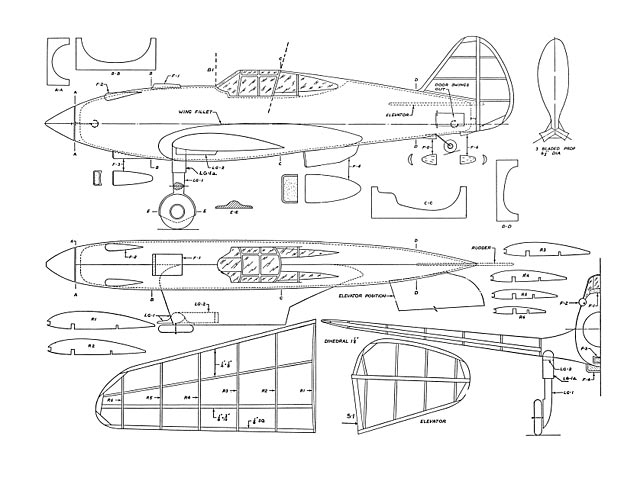 When our Air Corps gets 'het up' over a sensational new military machine - then it's time for ol' FA to step in and give you model fans a corking copy of 'er. Well, fellows, Curtiss HAS turned out such a ship - the striking XP-40, rumored to be the fastest fighter in the world. And now here, in double-quick style, we have Jesse Davidson presenting you with a keen flying replica of this remarkable low-wing combat job. Go to it, modelers.

A FAST-DASHING flying model of a new Army pursuit! That's the kind of job which we know goes over the biggest with all you modelers - and that's the kind of miniature skyster we have for you here in this Curtiss XP-40 pencil-streamlined winged hurricane!

Granted, this striking craft - we mean the real XP-40 - is on the secret list. So we don't know the full inside details of how this cloud hurtler ticks. And we wouldn't be allowed to give you such sub rosa dope if we did.

But hush-hush policy to the contrary, you can still have a staunch and speedy rubber-powered replica of this fighter on your model tarmac. And in this article we give you full instruc-tions on how to go about it.

First off, readers who are familiar with the Curtiss XP-37 will notice that the lines of the XP-40 bear a great similarity to the earlier craft. Upon closer study, however, new details are revealed. The pilot's compartment has been moved farther forward and is completely enclosed by the usual sliding hatch. What's more, a new and more powerful engine - namely, the Allison 12-cylinder liquid-cooled plant which develops something like 1,620 hp - is said to drive the XP-40 at a cruising speed of better than 350 mph. And top speed? Well, rumor has it that the ultimate velocity is in the neighborhood of 400 mph! Wow! No wonder they're hush-hushing her!

Machine guns within easy reach of the pilot are the latest Browning .50 caliber type. Another appetizing bit we'll pass on to you is the stirring gossip that recently reached the ears of Walter Winchell. This story has it that our Air Corps master-minders are somewhat worried that the XP-40 may fly so fast that it'll be darned hard for our flyers to aim 'er straight!

The XP-40 is the latest modification of the original Curtiss Hawk 75 low-winger which made the last of the old Hawk biplanes look like a wartime Jenny by comparison. The fuselage of the XP-40 has been effectively thinned out behind the cockpit, resulting in the attainment of increased speeds through streamlining. The wing is of all-metal structure, internally braced, and completely housing the retracting landing gear.

Ailerons, rudder, and flippers are of metal construction, fabric covered, The three-bladed Curtiss constant-speed prop is encased in a spinner cap, giving the ship's external appearance extremely clean lines. And it also gives the model more of the real-shipish streamlined looks.

The model's fuselage. The hollwed type of fuselage used in our model has been chosen because this is the best way to simulate the metal skin used on the actual ship. The fuselage, which is carved in halves, necessitates the use of stiff paper templates for its top and side views, as well as for the cross-sectional contours.

Fuselage blocks should be of the softer balsa variety and knot-free throughout. The first step is to cement both fuselage blocks together very lightly since they must later be separated. Trace the side views of the fuselage on both sides of the block and remove all the excess wood with a sharp knife. Use sand-paper to smooth the surface and then trace out the top view of the body..."

Quote: "Here's a scan of the Curtiss XP-40 plan from the April 1939 Flying Aces. Plan, or at least the article, is by Jesse Davidson and Harry Appel. Span as printed is about 20 inches. Fuselage is hollow carved balsa. According to the article, the XP-40 was still 'secret', so the designers may have had a bit less information available than usual." 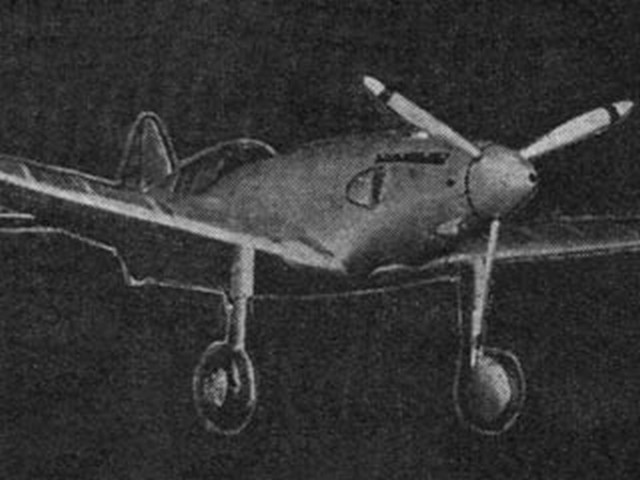