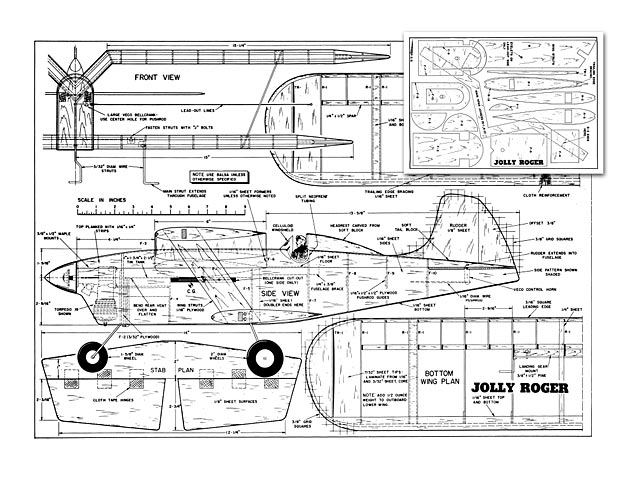 Quote: "The urge for bipes in Stunt produced this fine model. Jolly Roger, by Larry Scarinzi.

In this modern day and age, biplanes are seldom seen on the control-line field. Between 1945 and 1950, when stunt flying was going through its basic development stages, many different configurations were tried in the hunt for a working stunt combination. The symmetrical airfoil was settled on quite early. Wing areas gradually got bigger and finally flaps were added.

Having been active at this time ourselves, we can recall our own test ve-hicles which were ships with simply constructed fuselages or profile jobs on which the nose and tail lengths could be varied quite easily (yes, we mean by using a saw). Flaps of different sizes and movements were also experimented with. Looking back on this era many of us can recall with a chuckle some of the wild ideas we've seen displayed on the flying field.

We can recall one failure seen at a flying site in North Jersey that consisted of a model with flaps on the leading edge as well as the trailing edge of the wing. The controls were rigged in such a manner that up elevator would give down to the trailing flap and the leading flap would go up.

Very confusing to look at - in fact the model flew in a very confused manner. Level flight could not be maintained and the inevitable crash finally came. For the record, this was not one of ours.

The fact that full-sized biplanes were popular in slow flying aerial acrobatics during the barnstorming days probably prompted many modelers to resort to the biplane as a stunt model. There were more biplanes seen dur-ing the 1945-1950 era than now. A small percentage of these did fairly well in early stunt contests. There was certainly more color and variety seen during this more challenging develop-ment era of control-line stunt.

From about 1950 to the present, con-test stunt models have lost a lot of their variety with only an occasional flying wing or biplane showing itself. This is probably a natural evolution process that resulted in the stunt model that we know today. It does not necessarily mean that other con-figurations (if properly designed, of course) are not capable of doing an excellent job of stunt flying.

In our own modelling group, we were not advocates of the biplane as a stunt model. We have always contended that by virtue of its having two wings there were built-in disadvantages that would keep the biplane from being the ultimate in stunt flying. However, as expressed above, we do feel that a bipe is capable of doing a good job of stunt flying if properly designed.

Now, let's go back to the 'Jolly Roger.' This ship is the result of compromises in appearance and performance. Half the fun of a bipe is its appearance. We were after a snappy looking model that would still allow for a working combination of wing areas properly placed so as to give us good stunt performance. This ship is smooth through all the round maneuvers such as loops and eights. On 52 ft lines it turns just tight enough to perform vertical eights.

Why the gull top wing? Appearance! Because the gull section covers only a small part of the overall wing area we did not feel that it would be overly detrimental to flight performance.

The original weighed in at 23 ounces and was powered by a Torp .19 swinging a 9x6 Power prop. This gave us a smooth flying model that is a little faster than you would expect. If your version ends up with approximately the same weight and CG location, and is kept fairly well lined up all the way around, you should get the performance described earlier.

Now that you know what to expect, we'll get on with construction. Keep weight in mind when choosing your materials. Although 23 ounces does not sound so overly light for a .19, it isn't too bad considering the amount of airplane that it makes up. Reasonable care should be sufficient to keep the weight of your model about the same or even lighter.

Begin construction by cutting out the necessary upper wing spar com-ponents of 1/4 x 1/2 in balsa and the center reinforcement of 1/16 plywood and assembling. When the spar is completed the ribs may be cemented in place on it and allowed to dry. Finish construction of the upper wing by installing the trailing edge, leading edge, tips, half ribs and center-section sheeting. We advise omitting the sheeting over the section housing the wing struts until final assembly. Construct the basic lower wing on its straight spar in a similar manner omitting the 3/8 x 1/2 in pine landing gear mount and not cementing the 3/4 root ribs fast until assembling with the fuselage.

Assemble the fuselage sides, motor mounts and all formers as shown. Mount the bellcrank on the inboard motor mount. The lower wing may now be located and cemented in place. Small sections of the fuselage sides (indicated by shading) will have to be removed to allow the wing to slide in from the bottom. Once the lower wing is positioned in the fuselage, the 1/4 in root ribs may be placed against the sides and cemented. The top wing is mounted next. The center section should rest between the motor mounts. Care should be taken to align the wings and fuselage properly.

The method used to mount the top wing on the original was to support the lower wing on the sides of a wooden box with the nose resting on one end. With the model rested on the three points described, the top wing should be cemented to the fuselage where the gull section rests against the corners of the motor mounts. When dry, the wings are spread apart at the tips to allow the struts to be installed and then pressure is released to allow the wings to go back to their natural resting place. Whether you do it this way, or by installing the top wing and struts simultaneously, check alignment with a square and by measuring the distance between the wings.

The elevators may now be assembled and installed completing the control system. Form the landing gear from 3/32 wire as shown and install. The main gear is installed from the bottom by cutting a small piece out of the root ribs and sliding the 3/8 x 1/2 in mount and gear in place as one unit. Install the fuel tank next and com-plete the fuselage by sheeting the bottom, planking the top and adding the rudder and cockpit detail."